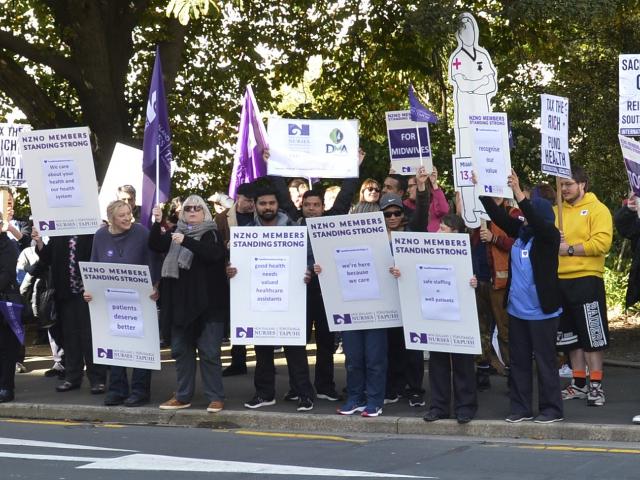 Nurses will make up their own minds whether to accept a pay offer from district health boards, without direction from their union.

A "haphazard" recruiting process has resulted in the Southern DHB failing to appoint the junior doctors required to implement the "safer rosters" schedule, the Resident Doctors Association says.

When he started his specialist career, medical oncology was new and New Zealand had faster access to cancer drugs than Australia. Southern District Health Board medical oncologist Dr David Perez spoke to health report Eileen Goodwin ahead of his retirement.

It was supposed to be a pre-baby break relaxing and walking the dog at Lake Hawea. But Timaru couple Nicola and Brent Prue's plans abruptly changed when Mrs Prue went into labour with son Angus, who was born last Tuesday, at 33 weeks' gestation.

The need to commission yet more expensive planning work at Southern District Health Board is evidence of leadership in the style of Fawlty Towers, senior doctors' union head Ian Powell says.

Dunedin Hospital's cooks will focus on food ''regeneration'' - rather than cooking fresh meals for patients - after their job numbers are cut, according to a proposal Compass Group tried to keep under wraps.

Repeated stalling on the $300 million Dunedin Hospital redevelopment shows the timeframe is slipping, but the Government will not admit it, North Dunedin MP David Clark says.

Patients have been waiting in corridors in the Dunedin Hospital emergency department as it copes with an influx that is stressing the entire hospital.

More than a quarter of ear, nose and throat patients who need surgery are being turned away from the overloaded Dunedin Hospital department, a letter released under the Official Information Act shows.

The Southern District Health Board has acknowledged it has no idea how much the Compass Group will spend equipping its kitchens over the next 15 years.

Concern over the proposed outsourcing of hospital kitchens dominated the first 30 minutes of a Southern District Health Board public meeting in Dunedin last night.

The Government's time frame for a new clinical services building at Dunedin Hospital appears to have slipped.

Up to $50 million will be needed to keep the clinical services building at Dunedin Hospital going for another 10 years, according to an assessment by the Beca consultancy group.

Dunedin Hospital is the country's sole public provider of a specialist radiation therapy and an upgrade means the service will be secured here.
Throwing good money after bad on the clinical services building at Dunedin Hospital does not make sense and the rebuild should be sped up, Southern District Health Board member Dr John Chambers says.

Views diverge sharply about whether Dunedin Hospital should become a lower-grade hospital, or should try to hold on to its existing status, feedback on a new Southern District Health Board strategic plan indicates.

A fish tank in Dunedin Hospital cost more than $1000 a week to run in its first year.