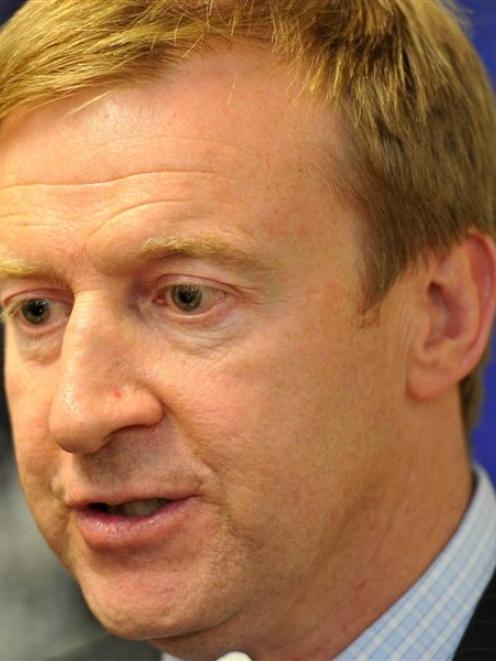 Jonathan Coleman.
The Government's time frame for a new clinical services building at Dunedin Hospital appears to have slipped.

It comes as a new plan emerged yesterday for a $25 million upgrade for other parts of the hospital complex.

It includes a new intensive care unit and a new gastrointestinal unit, both of which are in the newer ward block.

On a visit to Dunedin Hospital yesterday, Health Minister Jonathan Coleman said the Cabinet would ''some time next year'' consider a business case for the clinical services building rebuild.

The Cabinet was expected to consider the $25 million proposal about the middle of this year.

Since last May, the Government has said the business case for the rebuild, expected to cost $200 million or more, would be considered by the Cabinet this year.

Asked about the change, Dr Coleman said it might still be considered in 2015, maybe in the last month of the year.

Dr Coleman was taken on a tour of the run-down clinical services building, and said he saw some of the pressures on it.

It has to last six to 10 years before the new building is ready, and Dr Coleman said the Government accepted the need for repair work, conceding, ''We do need to have a functional clinical services building.''

Before a total rebuild could be approved, the board's strategic health plan needed to be approved and implemented, as it was important to know what was going to be put in the hospital before detailed planning.

Dunedin North MP David Clark was scathing about the situation when contacted.

''The time frames are slipping. Tony Ryall indicated that he hoped Cabinet would be considering something earlier in 2015, and that deadline has clearly shifted.

''We are learning that we can't really trust the Government to commit.''

Earlier, Dr Coleman took a swipe at Dr Clark, accusing him of playing politics with the rebuild, and ''driving down confidence and morale''.

The future of health services in Queenstown also seems to have slipped in the list of priorities.

Since the cash-strapped Southern District Health Board pulled out of its planned upgrade of Lakes District Hospital, last September, there has been uncertainty around Queenstown health services.

Dr Coleman said the Southern District Health Board had bigger problems to worry about than Queenstown.

''I don't think that's the biggest issue in the DHB at the moment. I think it's important people focus on the big challenges around the deficit while continuing to deliver clinical services.

''Changes in the Queenstown arrangements aren't going to solve the much bigger problem around financial and clinical sustainability.''

Last October, when he visited Dunedin, Dr Coleman said the configuration of Queenstown health services was an issue that needed to be sorted for the long term.

Dr Coleman, who visited the children's ward at the same time as members of the Highlanders team, praised the high quality of clinical care at Southern District Health Board.

Chief executive Carole Heatly released a statement on the new $25 million plan: ''The DHB is working on a strategic assessment and business case to the national capital investment committee.

''The bid for approximately $25 million would include a new ICU facility and new gastrointestinal facility. These are much needed and we hope that the bid will be positively received.''

• Will be replaced in six to 10 years