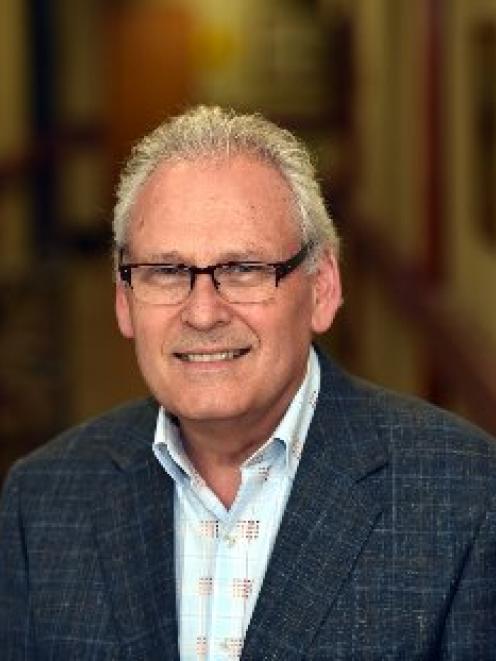 Dr David Perez has spent 32 years at Dunedin Hospital. Photo by Gregor Richardson.
When he started his specialist career, medical oncology was new and New Zealand had faster access to cancer drugs than Australia. Southern District Health Board medical oncologist Dr David Perez spoke to health report Eileen Goodwin ahead of his retirement.

The ‘‘almost intense'' relationship that forms between doctors and cancer patients allows a view of the ‘‘higher level of existence'' they attain when facing death, observes Dr David Perez (65), who has spent more than three decades working in oncology.

The tender insight is typical of the medical oncologist, described by younger colleague Dr Chris Jackson as an ‘‘incredible human being'' and ‘‘true humanist'' who fosters a culture of respect.

A humble person, Dr Perez did the right thing by colleagues and patients without caring much for recognition, his colleague says.

Only the second medical oncologist in New Zealand and the first in Dunedin, Dr Perez retires on January 8 after 32 years at Dunedin Hospital.

Now a fixture of the medical establishment, medical oncology was new when Dr Perez qualified.

‘‘It was all taking off at that time.

‘‘The whole scene was buzzing with new ideas. The job prospects were very good.'' His career virtually represents the lifespan of medical oncology in New Zealand, and when he started, chemotherapy was effective against a much smaller number of cancers.

An openness to ideas is perhaps reflected in strong support for complementary therapies like acupuncture and massage therapy.

‘‘I would like to see non-drug treatments incorporated into cancer care.

‘‘My attitude is that many of them are positive, and I wish we could offer them as part of the system.''

He is pleased with the increased psychological support for patients, an area he championed.

Alternative therapies were ‘‘more challenging'' and while he supported patients making decisions, it was tough seeing a small number shun conventional treatment and place their faith in a dietary or prayer-based cure.

‘‘I try to persuade them not to delay treatment, perhaps do both at the same time if they want.‘‘But ultimately, it is their choice. We can advise, persuade sometimes, but ultimately we can't control it.''

Originally from Auckland, Dr Perez started his medical training in 1967, the foundation year of the new medical school in Auckland. He did the bulk of his specialist training overseas, spending two years in Sydney and three years in London before taking the job in Dunedin in late 1983.

‘‘Throughout the country there were virtually no medical oncologists.

‘‘It just so happened that Dunedin decided to employ one.''Years earlier, as a young house surgeon in Auckland, he had been allocated to a cancer ward, ‘‘not particularly my choice''.

As it happened, it was a dynamic ward with an enthusiastic radiation oncologist who had moved into chemotherapy. Then, New Zealand fared well in respect of access to the newest cancer drugs, receiving them before the likes of Australia - a far cry from today.

People often talk of the value of empathy in medicine, which is particularly desirable in oncology, a point Dr Perez makes to young doctors considering the specialty. He tells them they must be keen to help patients who are ‘‘really struggling and not feeling well''.

‘‘They may not be co-operative. It's not easy. But if you enjoy that challenge, it's a great job.''It gets tiring, and he has pondered the desirability of oncologists spending a few months in another part of the hospital so they get a break from the emotional burden of oncology.

The rewards lie in relationships built over time - sometimes years - with patients who have faced their demons, in some cases‘‘reconstructing their lives''.

‘‘I believe that for many of them they achieve a better level of existence. They're more impressive than the general population.''

He is a cautious supporter of law change to allow euthanasia, but says getting the right safeguards in place poses a big challenge.

‘‘I've seen a limited number of people who are very thoughtful people, intelligent, and they get to the point where they say to me that they have nothing to look forward to.''

From the right to die to the cost of drugs, cancer can be fiercely political and that could be a good thing, he says. For one thing, political pressure brought waiting times for treatment down.

Right now the hot issue in cancer is the funding furore over melanoma drug Keytruda, part of an ‘‘enormous headache'' he will not miss.

It is one of the new generation cancer drugs pressuring countries' health budgets.‘‘It's a challenge I'm not unhappy about leaving behind.''

He does not want the Government to overrule drug-buying agency Pharmac, but supports the idea of an emerging drugs fund.

The Keytruda dilemma will grow as it is likely to be effective against a range of cancers - not just melanoma - but it's the lack of other effective treatments for that cancer that made the recent funding knock-back especially tough.

The causes of cancer - and just why some, like lymphoma, are increasing - is also contentious.

He believes it possible some agricultural chemicals are contributing, and evidence is ‘‘accruing'' on cellphone radiation.

Young people should probably avoid daily use of cellphones before more is known, he suggests.

Dr Jackson says Dr Perez is not wedded to rigid rules and models, and willingly adapted his thinking.

‘‘His commitment to oncology, the Otago Medical School, and the community is unparalleled.

‘‘He has done everything there is to do in oncology.''Not just his accomplishments, such as helping set up the Otago Community Hospice, but warmth, generosity, and kindness made Dr Perez special, Dr Jackson says.

‘‘When you work in oncology and you're in the environment that David fostered for so many years, you can feel it.

‘‘His absence will be deeply felt.''Dr Perez is keener to give credit to other members of the team, and is pleased with the increased prominence of nurses in cancer care. Nurse specialists and nurse practitioners were like ‘‘doctors in nurses' clothing''.

‘‘I was the clinical leader of oncology when our first counsellor was appointed and at that time Dunedin was one of the few units in New Zealand who had a dedicated counsellor - so I played a role, but so did nursing and management.''

In retirement, Dr Perez will catch up on reading, gardening and seeing more of his family.

But he will remain involved with the hospital and medical school.

He is helping oversee the intensive care unit redevelopment and a couple of other projects at Dunedin Hospital, and is liaison academic for the National University of Samoa, which is revamping its medical school curriculum with help from the Otago Medical School.

Typically, Dr Perez is reluctant to accept his retirement will be a loss for the department.