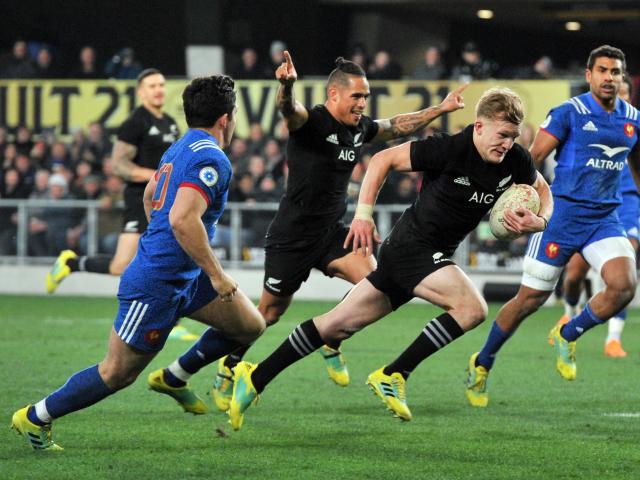 The All Blacks will play France, Italy and two yet-to-be-determined qualifiers in pool play at the 2023 Rugby World Cup in France.

Hosts England and Six Nations champions Wales paid a heavy price for the November defeats that sent them tumbling them down the rankings when they were put in a tough pool with Australia in the draw for the 2015 Rugby World Cup.
Labour has been left red-faced after the latest disclosure of MPs' financial interests revealed eight Labour MPs took free tickets and hospitality from SkyCity casino during the Rugby World Cup.
New Zealand hotel prices shot up by the steepest amount in the world last year as the Christchurch earthquake hit supply and overseas visitors poured in for the Rugby World Cup.
The Rugby World Cup helped take international visitor numbers to record levels last year - but they watched their pennies while they were here.
Rugby's governing body says United States winger James Paterson has been banned for four months after testing positive for a banned painkiller at the Rugby World Cup.

Rugby World Cup organisers have promised a fairer deal for the smaller countries at the 2015 tournament in England following the widespread condemnation of the unbalanced playing schedule last year in New Zealand.

New Zealand's unemployment rate unexpectedly rose in the third quarter, with little evidence the start of the Rugby World Cup drove an increase in casual workers to service the wave of tourists.

Wales captain Sam Warburton admits referee Alain Rolland was right to send him off in the Rugby World Cup semifinals loss to France for a tackle that was "uglier" than he first thought.
Claims by overseas visitors injured during the Rugby World Cup have cost the Accident Compensation Corporation more than $70,000 to date.
The parents of a teenage boy killed on his way home from celebrating the All Blacks' World Cup win wanted him to stay at home that night.

Standout French No 8 Imanol Harinordoquy has let fly at the team's World Cup coach, at the same time  having a crack at All Black captain Richie McCaw and Cup final referee Craig Joubert.

Telecom has pulled out of its "no sex over the rugby World Cup" campaign, saying it had misjudged public reaction.

Rugby World Cup ticket sales have reached almost 90 percent of the organisers' target, a month out from kick-off, boosted by the All Blacks' Bledisloe Cup win over the Wallabies at the weekend.

World leaders are lining up to attend the Rugby World Cup, but British Prime Minister David Cameron is unlikely to visit unless England makes the final.
The Fiji rugby team has been urged to play clean rugby and avoid off-field temptation at a church service marking their impending departure for the Rugby World Cup.

Rugby World Cup organisers say there are actually two William Webb Ellis Cups, and that the one that toured the country last month was one of them.

Lock James Horwill has been named as the Wallabies captain for next month's Rugby World Cup after the team's 30-man squad was announced today.
England halfback Danny Care has been ruled out of next month's Rugby World Cup after sustaining a toe injury in last weekend's defeat to Wales, it has been confirmed.
The All Blacks need to put their ultimate goal out of their minds if they are to succeed in the upcoming rugby World Cup, sport psychologist Gary Hermansson says.