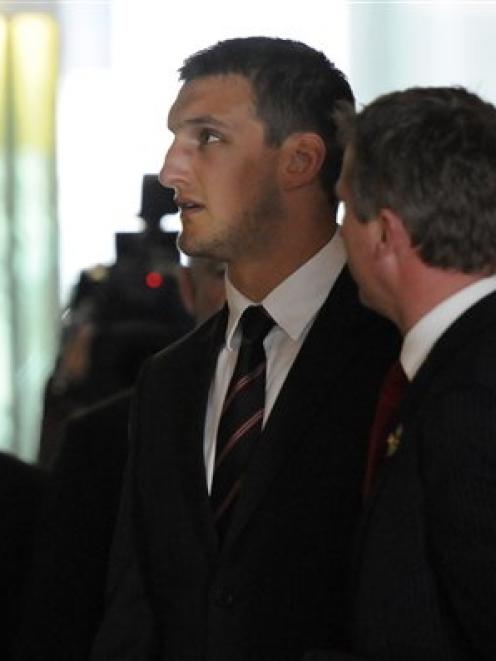 Wales captain Sam Warburton, centre, prepares to face a red card hearing in Auckland after being sent off by referee Alain Rolland for a dangerous tackle on France's Vincent Clerc during their Rugby World Cup semifinal last month. (AP Photo/Ross Land)
Wales captain Sam Warburton admits referee Alain Rolland was right to send him off in the Rugby World Cup semifinals loss to France for a tackle that was "uglier" than he first thought.

Warburton was red-carded for a tip tackle on Vincent Clerc in the 18th minute, leaving his teammates short a man for more than an hour in a match they lost by only one point at Eden Park.

The Welsh camp blasted Rolland for days, claiming the dangerous tackle wasn't worthy of a red card and the Irishman acted too hastily.

But Warburton, serving a three-week ban that ends this weekend, says he can't complain about Rolland's decision.

"At the end of the day the IRB said if you lift up a player and drop him it's a red card, and that's exactly what I did," Warburton said. "I can't complain. There was no point in appealing against it and I didn't have a leg to stand on really."

Immediately after the semifinal, Warburton believed he'd committed "a normal tackle." But on video review he'd changed his mind.

"I didn't intend to do anything like that and I had only had a yellow card in my career up until that point so it was a shock to get a red, but there was nothing I could do and I just had to support the boys for the rest of that match and the remaining game against Australia."

The International Rugby Board supported Rolland for upholding the law about tip tackles, but Rolland has been overlooked for refereeing any of Wales' matches in the Six Nations next year.

Warburton hopes to hold on to the captaincy in the face of the return to fitness of Matthew Rees. Rees was to lead Wales at the World Cup until he withdrew before the event with a neck injury. He returned to action for his club last weekend and said he'd like to be national skipper again.

Warburton understood Rees' ambition. Coach Warren Gatland will choose between them before Wales' last outing of the year against Australia on Dec. 3 at Millennium Stadium.

"I can understand both scenarios," Warburton said.

"If it was offered to me again I would take it, but Matthew did a great job during the Six Nations so I would understand if they want to give it back to him. But personally I would love to hold on to it after enjoying it at the World Cup."