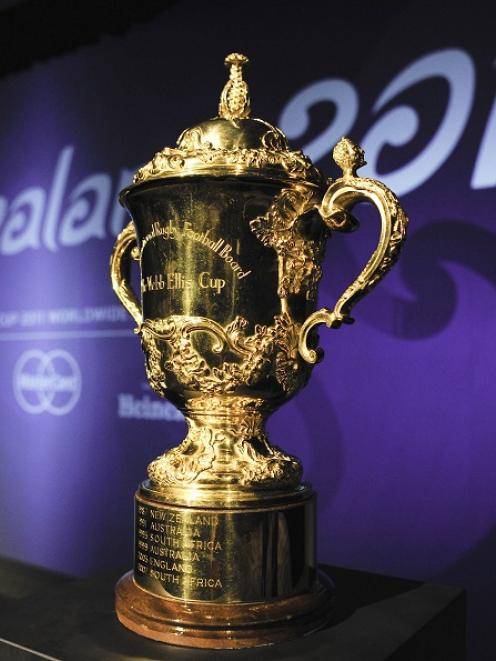 The Wiliam Webb Ellis trophy, seen on display before the 2011 Rugby World Cup. Photo Reuters
Hosts England and Six Nations champions Wales paid a heavy price for the November defeats that sent them tumbling them down the rankings when they were put in a tough pool with Australia in the draw for the 2015 Rugby World Cup.

Holders New Zealand, who have never lost a pool game in the tournament, got a favourable draw as they will face Argentina, Tonga and two qualifiers.

Twice winners South Africa were paired alongside Samoa for the fourth consecutive World Cup and Scotland, while fourth seeds France, who leapfrogged England in the rankings to snatch the last top-tier seed, were rewarded with games against Ireland and Italy.

Tournament officials said the draw was made three years ahead of the event to ease planning and logistics and they now know to organise sizeable venues for the eye-catching Pool A clashes.

England's November defeats by Australia and South Africa sent them into the second tier of seeds while Wales's precipitous decline since their Six Nations grand slam dropped them to the third tier a little over a year after they reached the World Cup semi-finals.

So they now face the toughest group, alongside twice champions Australia, along with "Oceania 1", possibly Fiji, and the winners of a final playoff.

While the importance of topping a pool can be debated, the fact remains that no team has lost a World Cup match and gone on to win the trophy.

"We might have to change our warm-up games," he added, after England had played Wales in warm-ups before previous World Cups.

"Australia have just beaten us and if you look at the age and profile of their squad, they have got some young lads as well. We will look forward to it."

Australia captain David Pocock said of the rivalry with the host nation: "It runs deep. To play them in the pool there will be a lot of hype around that game and it's one you look forward to as a player."

One crumb of comfort for the teams in Pool A is that should they top it they are unlikely to play world champions New Zealand, who England hammered 38-21 at Twickenham on Saturday having lost the previous nine meetings, until the semi-finals.

Wales have also lost their last nine games against Australia but coach Warren Gatland put a positive spin on the draw.

"We put ourselves in this position and our experience of 2011 is that if you come out of a tough group it sets you up for the quarter and semi-finals," said Gatland, whose side lost to South Africa but beat Fiji and Samoa before overcoming Ireland in the quarter-finals.

"The tougher the group the better. If you look at New Zealand often they don't get tested enough in the pool stage, Teams sometimes field a second side against them. And then they often come undone."

If New Zealand win their pool, as they have in every previous tournament, they face the runners-up of Pool D, likely to be France, Ireland or Italy. Pool C runners-up, Argentina or Tonga, will play the Pool D winners.

But All Blacks coach Steve Hansen, whose 20-game unbeaten run ended on Saturday, was taking nothing for granted.

"If you don't respect somebody you are going to get your rear end spanked. No-one has a God-given right to get through the quarter-finals."

France have been pooled with one of the southern "big three" only once in eight World Cups and coach Philippe Saint-Andre was happy with his European group.

The World Cup will get under way on September 18, 2015, with the final to be held at Twickenham on October 31.