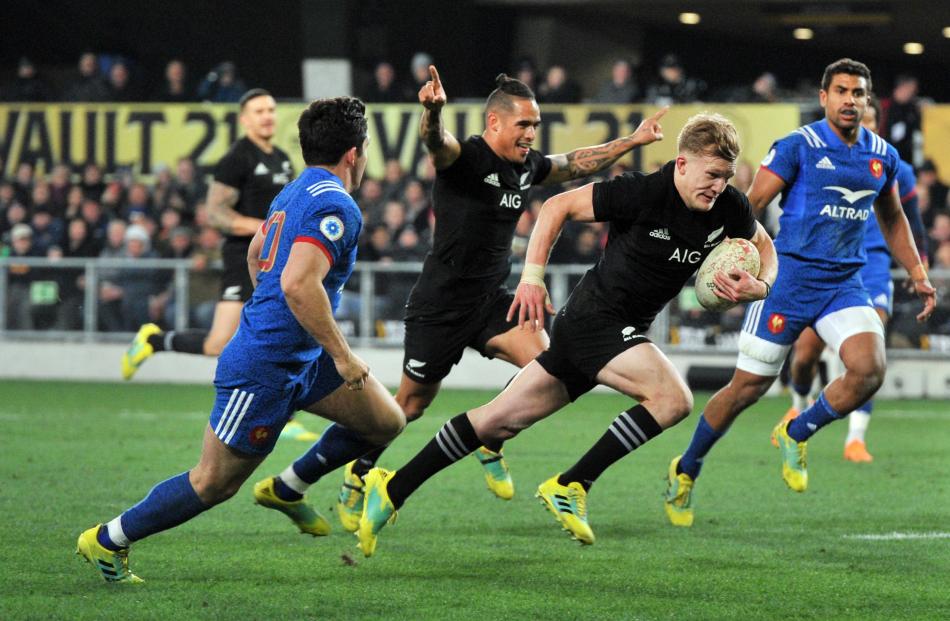 Arron Smith celebrates as Damian McKenzie scores a try against France in Dunedin in 2018. Photo: ODT files
The All Blacks will play France, Italy and two yet-to-be-determined qualifiers in pool play at the 2023 Rugby World Cup in France.

The draw was held in Paris overnight. A qualifier from the Americas and Africa will join them in Pool A.

The All Blacks have played France seven times at RWCs, the most of any country, and Italy five times, with the 2019 fixture cancelled due to Typhoon Hagibis in Japan.

The Americas 1 winner will come from a play off series between the 2021 Rugby Americas North champion and 2021 Sudamerica Rugby champion.

Africa 1 will be the winner of the 2022 Rugby Africa Cup.

All Blacks coach Ian Foster revealed he is a huge admirer of the French side, who have secured seven wins in nine tests in a promising year under coach Fabien Galthie.

"Obviously to have France in our pool is going to be very special, I've not doubt they will be organising a superb World Cup," Foster said.

"You can see all their planning is around 2023 so we can expect a vibrant French team.

"We know they'll have massive support behind them. But that's what makes World Cups so special, those sort of games that we thrive on and look forward to."

New Zealand, the only team to have never lost a pool game, beat France at the same stage in 2011 and again in the final.

Foster is hoping victory against the hosts could prove to be a morale booster once more for the All Blacks, who will look to improve on their disappointing third-placed finish in 2019.

"Some people will think it's not good to be drawn with the home team but the flipside is that you get the chance to put a marker down.

"We've seen before that finalists can come out of the same pool. If you play France in the pool it means you're not playing them in the first knockout game which can be an advantage."

Australia's Wallabies are in Pool C with Wales, Fiji and two yet to be confirmed teams, with England, Japan, Argetina and Oceania and Americas team in Pool D and South Africa, Ireland, Scotland a Pacific and European team in Pool B.

As with previous Rugby World Cups, the tournament will feature 20 teams divided into four pools of five.

Twelve teams have already qualified - the top three teams from each of the four pools at the 2019 World Cup - and were seeded into three bands based on their position in the World Rugby rankings at the start of this year.

The 2023 RWC will take place from September 8 to October 21 at nine venues.

The All Blacks have won the Rugby World Cup three times: the inaugural competition in 1987 and back-to-back titles in 2011 and 2015.