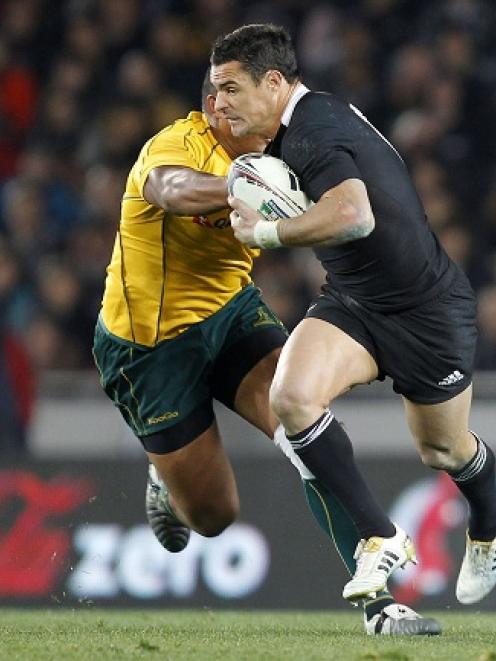 New Zealand's Dan Carter looks to fend off the tackle of Australia's Sekope Kepu during the Tri Nations and Bledisloe cup match at Eden Park in Auckland on Saturday. Credit:NZPA / Wayne Drought.
Rugby World Cup ticket sales have reached almost 90 percent of the organisers' target, a month out from kick-off, boosted by the All Blacks' Bledisloe Cup win over the Wallabies at the weekend.

World Cup boss Martin Snedden today announced 1.08 million tickets had been sold to date, some 230,000 shy of the target.

Snedden said there had been a lift in sales every week.

Nearly 300,000 tickets worth $65m had been sold in the past 10 weeks, with a $1m sales surge since the Bledisloe Cup match at Eden Park on Saturday alone.

The expected number of international visitors had increased to 95,000, up from last year's estimate of 85,000.

More than 30,000 fans were expected from across Australia, while expected visitor numbers from traditional rugby markets like the United Kingdom, Ireland and France were also strong, at some 35,000 fans.

"This is tremendous news and a real sign of just how big Rugby World Cup 2011 will be for our country," he said.

"The upsurge in support from overseas fans is a strong sign of confidence in our ability to host the biggest sporting event New Zealand has ever held."

Snedden said the challenge in the coming weeks was to reach the ticket sales target, which he said was achievable.

"Our message to fans is, get in now as many matches will sell out. Time is really running out," he said.

Prime Minister John Key today said ticket sales were going well and there was a big up-tick in demand from overseas, particularly from Australia.

He was not at the match on Saturday night, but said people were for the most part happy with the way Eden Park performed.

"The stadium, I hear, looks absolutely magnificent when it's full of people," he said.

He said there was "massive pressure" on All Blacks captain Richie McCaw and the team to win the cup, but that pressure was there because New Zealanders wanted them to win desperately.

"That team is a great team, personally I think they're going to win," he said.

"I think McCaw's a great captain. I think at home with a huge amount of support and massive amount of bench strength and a team that's very, very focused, I think we're going to get there."

Asked if there was an honour in it for McCaw if the All Blacks won, Mr Key said he hoped so.

"Can't think of anything more joyous than Sir Richard McCaw," he said.

Mr Key said the "dream scenario" would be an All Blacks versus Wallabies final -- "with a substantial All Black victory".