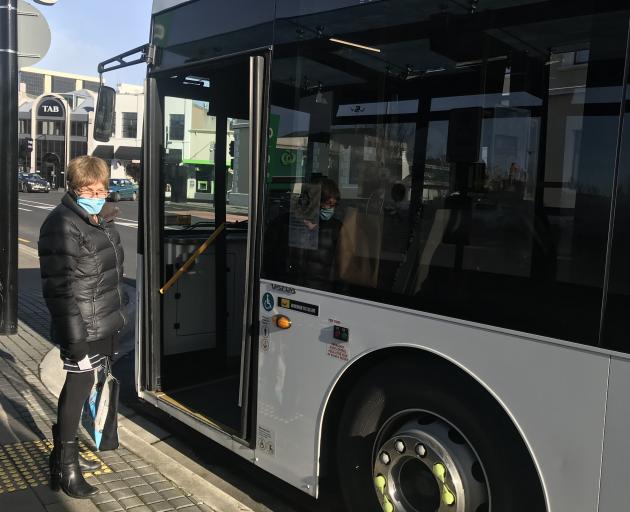 Elaine Day, of Dunedin, is masked up at the bus hub.PHOTO: GILLIAN VINE
Despite the sharp increase in Covid-19 cases in Australia and tighter lockdowns in New South Wales and Victoria, many Dunedin bus users are still defying the mask-wearing rule.

Go Bus depot manager Dave Gordon said, from his observations, there was ‘‘not a great difference’’ in compliance since the recent sharp increases of Covid-19 infections in Australia, especially Sydney.

In New Zealand, which is on Alert Level 1, legally everyone travelling on public transport, including drivers, must wear a face covering, although there are some exemptions.

Among those exempt are people with physical or mental health disabilities that make wearing a face covering unsuitable; and those who need to communicate with someone who is deaf or hard of hearing.

Also exempt are children under 12 and pupils on school buses.

Observations by Star reporters showed school-aged children over 12 formed the biggest non-compliant group, with masks the exception rather than the norm.

On a late afternoon Brockville service leaving the Hub recently, of 16 passengers only four (three adults and one teenager) wore masks. Most of the non-compliant passengers were teenage children.

But Mr Gordon said he thought it likely that high school pupils did not understand that they needed to wear masks on public buses.

People without face coverings were not stopped from boarding buses and several drivers said they had given up trying to encourage people to wear masks as they were tired of being abused.

One driver said he felt adult compliance was ‘‘not bad’’, although he noted that young women ‘‘in full war paint’’ tended not to wear masks, he suspected for fear of wrecking their make-up.

Taxi and ride-share drivers are required to wear masks and although it is not compulsory for passengers to wear them, the Government’s Fight Against Covid-19 website strongly recommends they do.

In a recent statement, Amanda Kvalsvig, an epidemiologist at the University of Otago's Department of Public Health, said New Zealand had been ‘‘unusually slow to adopt face masks compared with the rest of the world’’.

This is completely unfair on those people who do the right thing. It should be; No Mask, No Ride. Those who don't want to wear masks can walk, it will give them time to think about things, like their arrogant disregard for other people's safety.

There is no Covid-19 in Dunedin. Why do you insist on bullying people?

As we have had demonstrated to us time and time again, it could show up, in a heart beat, and be easily and rapidly spread before we realise what has happened. Reducing the chance of contact and transmission is the goal. Nothing to do with 'bullying'......no one is being 'bullied', precautions are being taken, simple as that. Better this than a lockdown eh.