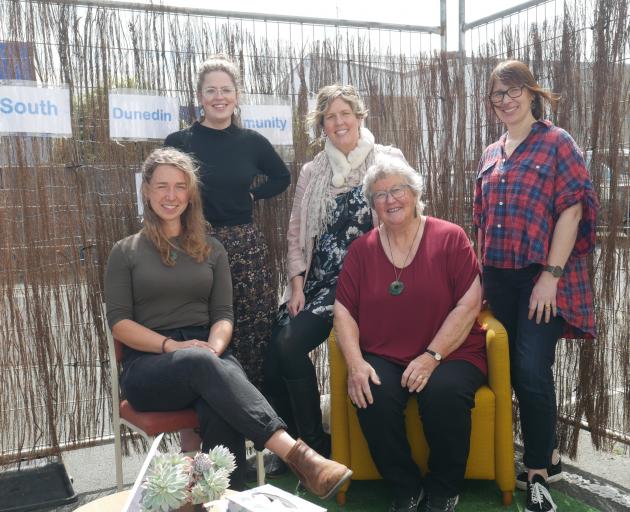 South Dunedin Community Network (from left) board member Jule Barth, administrator Grace Hannah, manager Robyn McLean, chairwoman Eleanor Doig, and board member Sarah Jones in the network's new car park connections area, created for Alert Level 2. PHOTO: JESSICA WILSON
The Dunedin City Council grants subcommittee recently allocated $400,000 in funding to seven ‘‘place-based’’ community groups across the city. The funding, which ranges from $13,000 to $63,000, will be used to help with the costs of building community connection and resilience for the next 12 months. In the coming weeks, reporters will highlight the  projects the funding will support  in your communities.  The series starts with the South Dunedin Community Network. Jessica Wilson reports.

A funding grant will allow the South Dunedin Community Network to grow and dream big, its manager says.

The network was recently given $55,000 as part of the Dunedin City Council’s place-based community grants funding.

The money would be put towards operational costs, including wages for one full-time staff member and two part-timers.

Network manager Robyn McLean said it would allow the network to run its two community hui each year, the teddy bear hospital, the street festival and its new car park connections initiative.

‘‘The fund is so amazing for us because it means you can trust a little bit of longevity and it means we’ve been able to grow,’’ Ms McLean said.

This is the third year the network has received place-based funding.

Ms McLean was pleased to hear the council was increasing the total funding pool each year, as the network was able to ‘‘dream big’’ and ask for more money without disadvantaging other groups.

‘‘The fact it’s growing is a great sign because it means that us and all the other groups can grow as well.’’

While operating in Alert Level 2, the network office was closed to the public so they had started the ‘‘car park connections’’.

That allowed the community to socialise while social distancing.

Network chairwoman Eleanor Doig said the funding showed the council valued ‘‘not just us, but our community’’.

‘‘We’re a community that has some challenges in the future and it’s our passionate belief that the community will be involved in decision-making around the changes that will happen,’’ Ms Doig said.

It was important to change the narrative around South Dunedin from negative to positive.

She was thrilled the network once again received funding from the council, as it was started by volunteers who would have otherwise struggled.

‘‘The arrival of that funding meant that this organisation could get off the ground.’’

The network keeps in touch with other place-based community groups to share ideas and resources.