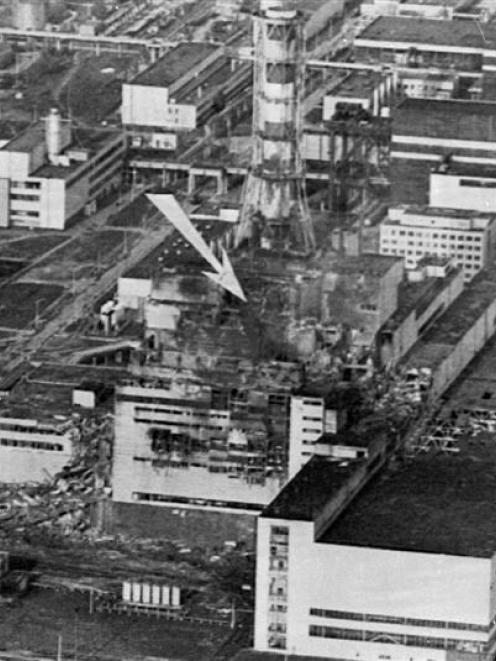 An aerial view of the Chernobyl nuclear power plant. The arrow shows the spot of the accident. A series of explosions destroyed reactor No. 4 station and several hundred staff and firefighters were thrown into the task of tackling a blaze that burned for 10 days, sending a plume of radiation around the world in the world's worst civil nuclear disaster. Photo by Reuters.
April, 30 BONN: The Soviet Union yesterday sought West German and Swedish advice on how to fight a fire at a nuclear power plant and West German experts said the request indicated that an atomic reactor in the Ukraine was still burning.

A spokesman for the Atomic Forum, a centre run by the West German atomic energy industry, said an expert from the Soviet embassy had appeared there yesterday and sought urgent advice on how to fight a graphite fire in a nuclear plant.

He said the information he gave indicated that a reactor at the Chernobyl power station in the Ukraine had melted down and the blaze was out of control.

The mishap in the Ukraine was reported officially on Monday after radioactive clouds were detected in Scandinavia.

The Soviet authorities yesterday refused to give the Swedish ambassador and envoys from several other Western embassies further information on the accident.

The only Soviet report so far, read out on television but not carried in yesterday's press, said the mishap had caused casualties and a government inquiry had been set up.

Chernobyl uses reactors of the RBMK.1,000 type, in which graphite tiles control the nuclear reaction in the core of the power units.

The Atomic Forum spokesman cited West German experts as saying that if the graphite had caught fire then it appeared virtually certain that the reactor core had melted and released enormous amounts of radiation.

The spokesman said the Atomic Forum was now tracking down German experts on graphite reactors and nuclear fire-fighting for the Russians.

He added that it was not yet clear if Moscow wanted the Germans to fly to the Soviet Union or just needed advice.

White House chief of staff, Donald Regan, who is accompanying President Ronald Reagan on an Asian tour, said during a technical stopover at a military base in Guam that the United States "could be helpful and would be if asked."

"We have a lot of experience in how we can handle these things, both medically and scientifically," he said.

The health risks from the accident probably are not high outside the immediate area of the reactor, U.S. experts said.

He predicted few such injuries in surrounding communities.

"There's such a big dilution effect," he said. "A lot of radioactivity is gas, and most radioactive gas is very short lived."

South-easterly winds blew a cloud of radiation over Sweden, Finland, Norway and Denmark throughout the weekend but the wind changed direction on Monday night and is now blowing from the north.