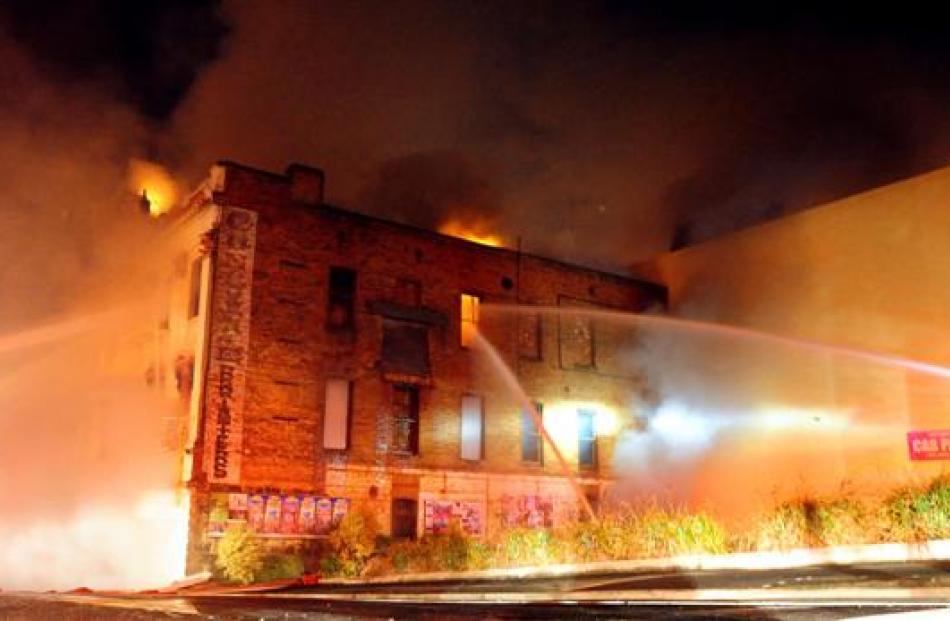 Firefighters attack the blaze in the Stavely Building from the outside about 4am yesterday after the fire was deemed too dangerous to fight from inside. Photo from <i>ODT</i> files.

March 31: A blaze that started in the basement and ripped through the upper storeys and roof of a 130-year-old central Dunedin building yesterday was deliberately set, police and Fire Service investigators say.

The 1.40am fire consumed the roof and the top floor of the Stavely Building, at the corner of Bond and Jetty Sts, leaving the tenants - a ballet school, a curtain-making business, a flat and a storage company - devastated and homeless.

A police guard remained at the building last night after a fire investigator "could not find anything to suggest it was not suspicious", Detective Trevor Thomson said.

Police were interested in sightings of three youths acting| suspiciously outside the building about 7.30pm on Saturday.

"A woman noticed these youths using bolt-cutters to break into a door on the Jetty St side of the building while she was waiting in a queue of traffic heading to Princes St from Jetty St," Det Thomson said.

Lauchlan Chisholm, a director of POS Developments Ltd, the company that owns the Stavely Building, said the company was shocked by the fire.

"We don't really know how bad it is yet, but it's probably not looking that good.

"Mostly, we feel sorry for the tenants. Our heart goes out to them."

It is understood the building was being sold, with the new owners due to sign for the sale today and take possession tomorrow.

Mr Chisholm declined to comment, but confirmed POS Development Ltd was the owner of the building, and had bought it six months ago.

The building was home to the Dunedin School of Ballet on the third storey, the Curtain Maker on the first and second storeys, a flat, and in the basement a storage business run by the owner.

The ballet school was completely destroyed, all stock and plant from the Curtain Maker ruined and the flat and storage units damaged by water, smoke and flame.

Dunedin's Chief Fire Officer, Dave Seque, said firefighters were called to the blaze about 1.40am after a passing police patrol noticed smoke pouring from a window in an upper storey.

It took 30 firefighters several hours to contain the blaze, preventing it spreading to surrounding buildings.

Initially, there were concerns people could be in the flat and an ambulance was called, but it was determined the flat was empty and no-one was in the building.

The building's age - it was built in 1879 - and the number of alterations to its structure made it a difficult and dangerous fire to fight, Mr Seque said.

"Finding the seat of the fire was difficult. It was dark, full of smoke. In the end we were worried about [the] structural integrity of the building."

Officers were pulled out and had to fight the fire from the outside.

A fire wall prevented the spread of the fire to neighbouring Princes St business Chipmunks, but the Stavely Building itself was damaged extensively inside.

The roof had fallen in and the top storey was destroyed, but the rest of the building appeared to be quite stable, he said.

The Otago-Southland area manager of the Historic Places Trust, Owen Graham, was unsure yesterday if the building was registered.

However, he said a pre-1900 building in that area of the city would be historically significant anyway and likely to be of archeological interest.