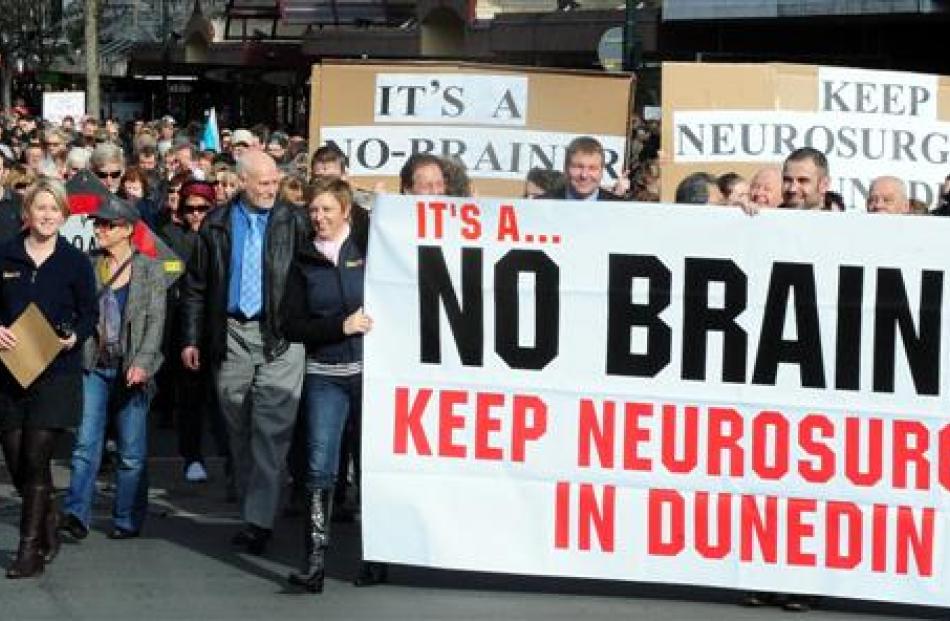 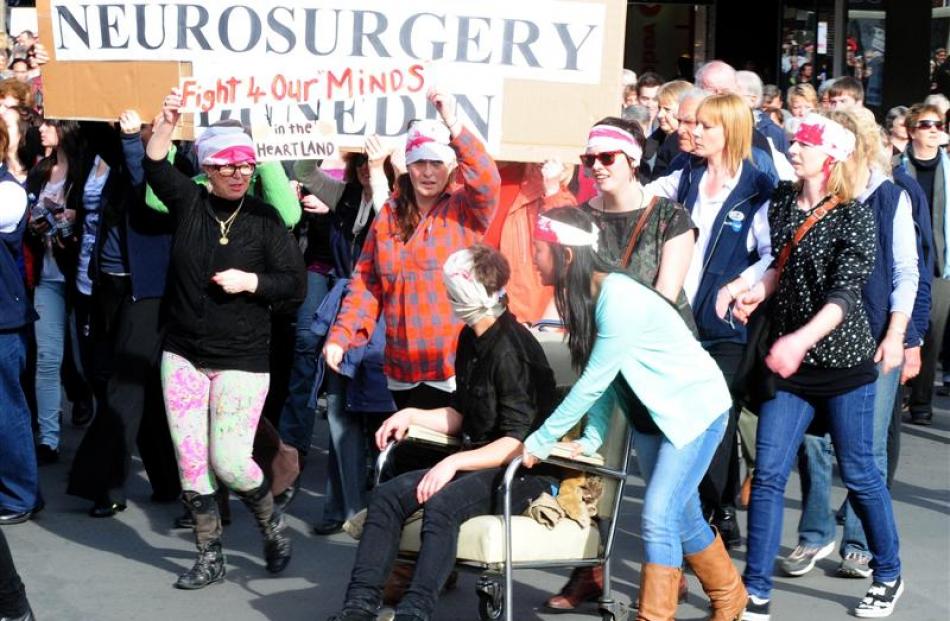 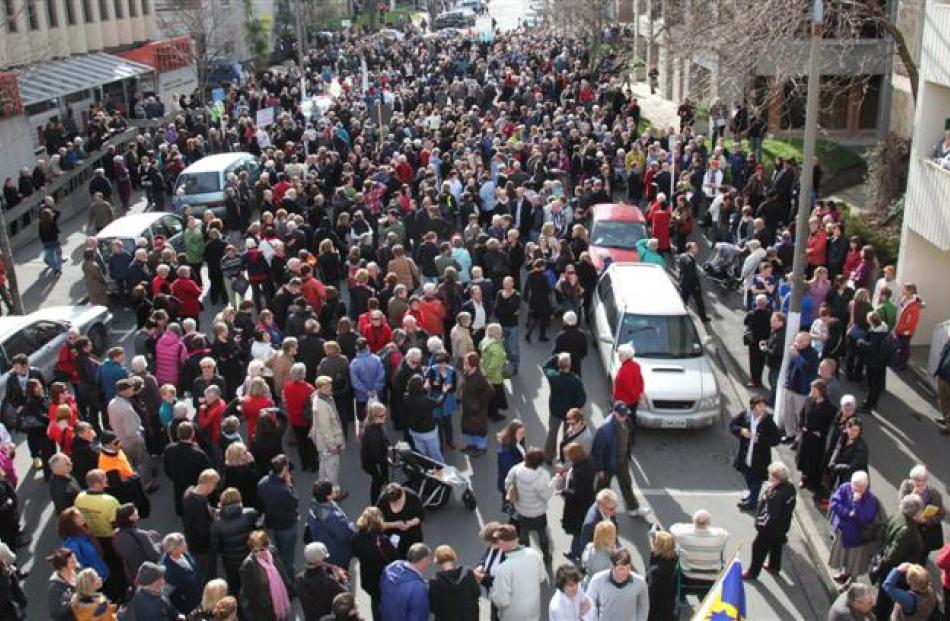 Up to 10,000 marched through central Dunedin in August protesting the possible loss of neurosurgery services. Photos from ODT files.

It was delight not doom for Dunedin neurosurgery campaigners yesterday with the news the service in the city will be enhanced rather than dropped.

In its 845-page report outlining the new model for South Island neurosurgery provision, the South Island Neurosurgical Service Expert Panel was explicit in its view of the role played by the public of Otago and Southland.

Public health providers "ignore the community view at their peril", the panel stated.

"They raised the issues that caused us to look critically from a clinical perspective at the services involved."

The report discards plans for a one-site service in Christchurch, instead opting for a single-service model with at least three neurosurgeons in Dunedin and four, initially, in Christchurch.

Two of the Dunedin surgeons would be University of Otago appointments, while the third would have an interest in spinal surgery and work across the public and private sectors.

The panel sees the Dunedin part of the service as New Zealand's academic neurosurgical unit, with research links to the major neurosurgical research centres of excellence around the world.

The no-nonsense report backed the view of thousands of Otago and Southland people that service changes which knowingly increased deaths or less favourable outcomes for patients could not be supported.

Nor did the panel accept the view that Otago and Southland campaigners were political, emotional and ill-informed.

Much of the public comment was well informed and thoughtful.

The panel received 2256 submissions from 2193 members of the public, along with 21,332 Otago Daily Times coupons supporting the retention of the service in Dunedin.

It said much of the emotion could have been avoided if the South Island health authorities had handled the issue better and sought community feedback in a more structured way.

"It is important to have real community involvement in our planning processes."

Panel members had not underestimated the significant responsibility South Island communities placed on them and it had been a privilege to work though the process with both communities and clinicians.

The panel ... said Canterbury had grossly underestimated the number of patients requiring emergency air transport to Christchurch if there were no Dunedin neurosurgery service.

The idea that general surgeons could be trained to provide emergency neurosurgery was also rejected as one which was not supported by international guidelines or practice.

Concerns that there was "no evidence that any serious planning" had been done to manage the extra cases in Christchurch if the Dunedin unit closed, and that the numbers of patients were seriously underestimated, were raised in the report.

Christchurch's intensive care unit was already under serious pressure and its waiting list for MRI scans was 1300 people.

The absence of a helipad on the hospital site was a major issue for patient transfer.

While many of these issues might be dealt with by the construction of a new hospital, completion of this was at least five years away.

It has been gratifying to see the generosity of spirit, the intellectual purpose and the genuine altruism with which the people of Dunedin, Otago and Southland embraced the cause of retaining neurosurgery services in the South.

We thank all the people who became involved, and the other media organisations who joined the Otago Daily Times in helping to convey such a purposeful message.

The key recommendation of the expert panel - for a service with an academic "neurosurgical node" using the research strengths of the University of Otago - will be welcomed by all who participated in one of the most intense exercises in participatory democracy in recent years in the South.

The panel's rider, that an academic neurosurgical centre of excellence be established and that the model recommended by the panel be "truly a New Zealand one, and, in particular, a South Island one", deserves the closest scrutiny and thought.

The recommendation reinforces the thrust of argument behind our "It's a no-brainer" campaign: that the decision must be based on three elements: health needs, educational opportunities and economic sense.

On all three points we were convinced the solution to the provision of a South Island-wide service lay in a two-centre arrangement, at Dunedin and Christchurch, with the university's Faculty of Medicine a core participant. So it has proved.