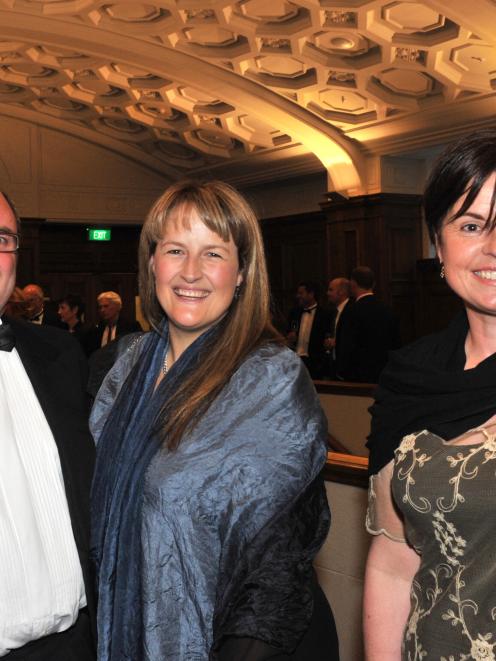 OBiz supreme winner, Simon Berry, of Whitestone Cheese, his wife Annabel Berry (centre), of Design Federation, and Chamber of Commerce president Ali Copeman at the 2014 OBiz awards held at the Dunedin Town Hall. Photo by Linda Robertson.
Whitestone Cheese, of North Otago, was founded in 1987 as a diversification during the 1980s rural downturn and a series of crippling droughts.

About 330 people attended the function which is held every two years.

The original factory was set up in Oamaru in a converted garage with milk sourced from local farms. One variety, Whitestone Farmhouse, was launched.

The business grew as an extension of the farming operation until today's purpose-built factory was commissioned in 1998.

Bob Berry's son, Simon, joined the business and the farm was sold to enable them to concentrate on developing the family enterprise.

The factory employs more than 50 staff and produces more than 20 varieties of cheese, supplying products for domestic and food service markets.

The versatility of the region could be celebrated through the business awards and having more regional entries each time the awards were held contributed to a strengthening economy.

Companies adding value and exporting from Otago were the key to the region's prosperity, she said.