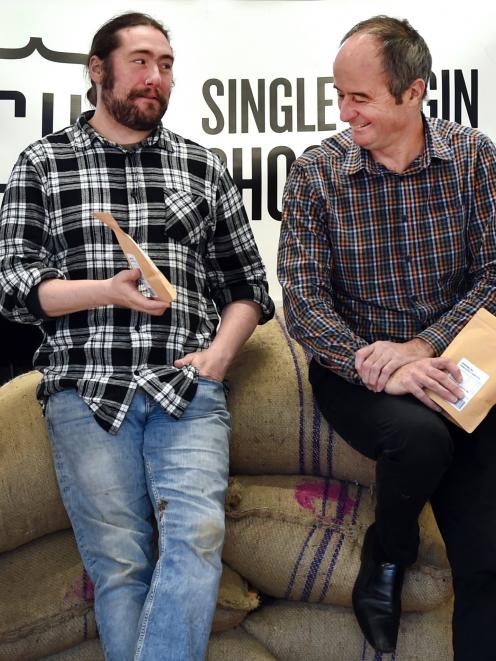 Tours and events guide Jared Smith (left) and acting managing director Jim O’Malley check out the new line of drinking chocolate. PHOTO: PETER MCINTOSH
A restructure in the wake of Covid-19 has put Jim O’Malley back at the helm of Dunedin chocolate-maker Ocho.

Before the outbreak, Ocho was predicting its first profitable year but the effect of the pandemic had been "quite extreme", Mr O’Malley said.

Its tours and factory shop had been on hold and a large chunk of its retailers — many with a strong connection to the decimated tourism industry — had also been on hold.

Within its remaining active wholesalers, there was a shift in purchasing habits towards "essentials" and lower-priced products.

Ocho was now forecasting sales for the upcoming year of $570,000 and a projected loss of $223,000, compared to a pre-Covid forecast of just under $1 million in sales.

That had forced a restructure, which included the disestablishment of the general manager’s position, which had been held by Dale Clements since October last year.

A four-day week had been implemented for the remaining eight full-time and three part-time workers, and Mr O’Malley had stepped in as acting managing director.

The Government’s wage subsidy had been "absolutely essential" to keep those jobs and, between that, the short-term business loan and the four-day week, he believed Ocho would "squeak through".

Staff had been very understanding as they realised the only motivation behind it was ensuring the company’s survival. The four-day week would be reviewed monthly, based on sales, he said.

Almost 3500 investors snapped up shares in the company following its "Own the Factory" PledgeMe campaign in 2017.

The campaign — launched in the wake of news that Dunedin's Cadbury factory would close — raised $2million in less than 48 hours.

The company underwent a major restructuring last year as it sought to return to profitability following higher-than-expected costs related to its expansion and relocation to its Roberts St factory, which opened in January that year.

Mr O’Malley said he represented the owners of the company, and he suspected that owners of many companies were having to "come back in and perform roles" in the wake of the pandemic.

Ocho had not gone back to shareholders for additional money, preferring to try to operate its way through it.

On Thursday next week, a new chocolate shop and tasting room would open at the Ocho factory, offering a shorter tasting experience. The aim was to be "Dunedin-centric" initially and then look at the local tourism market.

A Ocho drinking chocolate would be launched into supermarkets in the next few weeks and the team had been "playing around" with different flavours and would be doing short runs of novel flavours.

A white chocolate would be on sale at the store when it opened. That was one of the new bars being worked on which, at first, would be available only at the store.

I thought Jim O'Mally already had a job as a city councillor?

Being a councillor doesn't preclude someone having or being in a business, If fact, it's just the sort of people you want involved in council. Having a notion of where money comes from, how hard it is to earn, and being careful how it is spent conditions you towards fiscal responsibility. The added bonus, Jim knows what it is like to actually get up in the morning, roll up your sleeves and 'earn' a living. Running a business is tough going in the best of circumstances. Most business owners I know work incredible hours and show determination and resilience. Hat off to the bloke. Dunedin needs more people like this in public office.

Wrong product IMO. Cocoa is OVER. See https://www.stuff.co.nz/business/world/113307506/a-kind-of-slavery-nestl...
Now dandelion coffee - that would be a real hit and dandelions grow like ...well, like weeds. And they grow right here.