Deal will change face of industry

Silver Fern Farms aims to be debt free with money in the bank by this time next year if a deal to form a 50:50 joint venture with Chinese food giant Shanghai Maling gets shareholder approval.

The deal would allow Silver Fern Farms to become unleashed, he said.

Mr Hewett's presentation to a media conference was peppered with phrases such as ''turbo-charged'' and ''compelling''. 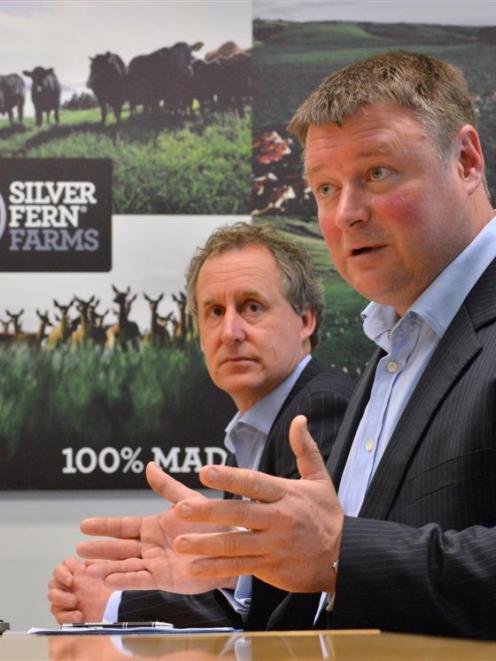 Silver Fern Farms chairman Rob Hewett (right) and chief executive Dean Hamilton. Photo by Gerard O'Brien
He now needs to convince farmers and shareholders of the merits of the deal, which will change the face of New Zealand's red meat industry.

Under the proposed deal, Shanghai Maling, part of Chinese Government-controlled Bright Foods, will invest $261million in cash for half of Silver Fern Farms' business.

The investment will be into a company to be named Silver Fern Farms Ltd, which would own all the assets of the business and be owned 50% by the existing Silver Fern Farms co-operative and 50% by Shanghai Maling.

The board of the co-operative plans to redeem the 5.5million supplier investment shares it has outstanding and pay a 30c-per-share special dividend to ordinary and rebate shareholders at the time of the transaction.

That compared with the 35c share price before their trading suspension in July, Mr Hewett said.

''We are a food company and that is not about to change.''

The problem in the past had been not having the right capital structure to take advantage of opportunities.

Silver Fern had recovered from a market downturn in 2012-13 but there was more to do, he said.

The challenge was the ''significant gap to bridge''.

Silver Fern had set a target of cutting debt to under $100million by the end of the financial year and wanted to return to paying dividends, but needed to be a strong company to be able to do that, he said.

While the company had done a good job, it had been running with the handbrake half on.

The investment by Shanghai Maling would allow Silver Fern to pay down debt, accelerate its value-added strategy and invest in its plants.

There was a strong likelihood extra staff would be taken on.

The Shanghai Maling deal was the best opportunity put before the company and represented the single biggest investment in both Silver Fern and in the history of New Zealand's red meat industry, Mr Hewett said.

''A cash injection is one thing. But getting married for money is only part of the equation.

''There is a spirit of how we will work going forward.

''This is a meeting of minds and values and was very easy to work through.''

Mr Hewett and chief executive Dean Hamilton start shareholder meetings this week with a special general meeting due to be held in Dunedin on October 16.

Asked what would happen if the deal was not approved, Mr Hewett said he would have done a poor job of selling it.

The deal did not need shareholder approval by law, or through Silver Fern's constitution, but the company had decided it wanted a buy-in by farmers, otherwise they might shift their allegiance to another meat company.

He was confident that once farmer suppliers understood the deal, they would vote in favour.

Meat Industry Excellence chairman Peter McDonald, of Dipton, warned farmers to read carefully the information being sent to them.

The implications of the deal would have an impact on their families and their long-term farming futures.

Otago Federated Farmers meat and fibre chairman Simon McAtamney welcomed the offer, while South Otago farmer Howie Gardner said there was nothing to fear from such a deal.