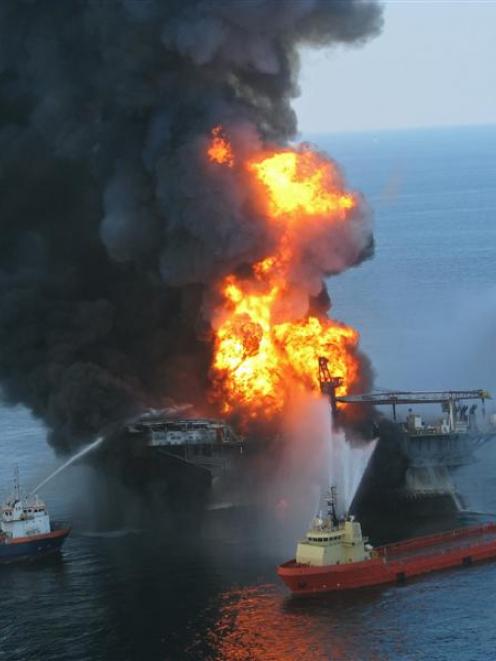 The Deepwater Horizon seabed blowout and subsequent rig fire was a combination of human and technological error. Photo by USCG.
Given the world's escalating energy needs and oil and gas reserves increasingly coming from deepwater exploration, the likelihood is drilling proposals around the South Island will only increase.

Shell and Anadarko are proposing separate test wells near Dunedin over the next 18 months in depths of about 1000m. Although the industry strives for 100% safety, there will always be a risk.

Anadarko is scheduled to drill next January. Shell will decide by the end of the year on whether to drill, in what could be an up to $US200 million ($NZ238 million) programme.

Deepwater operations have captured the attention of not only the major explorers, because of their potential size, but also environmentalists, as each tries to assess the risk-reward scenario.

Mr Warren said the world was in an ''energy renaissance'' where ''unconventional'' oil and gas production, from fracking, was increasing production.

''Most of the discoveries by majors [the big oil companies] have in recent years been in deep water,'' he said.

Pepanz chief executive David Robinson summed up the conundrum of the oil sector, and environmentalists, noting that while the world ''aspired to be carbon-free'', everyone was ''living in a petroleum [dominated] world and the leap to renewables'' was in the hands of science and technology.

Deepwater drilling was giving a new lease of life to the sector, alongside unconventional shore drilling, deferring the peak oil issues for at several decades. Wells discovered in the 1950s were again being drilled, either unconventionally or in deep water, Mr Warren said.

He noted production from one large deep well equated to, in general, 12 wells in the past: ''The efficiency in large [deepwater] reserves is the key.''

Mr Warren defined deepwater as drilling in 300m-400m, which means 17 of New Zealand's 18 offshore basins will be deepwater.

''As natural gas prices increase, expect the new technology to be applied there,'' Mr Warren said.

Mr Warren was asked by one of the 250 conference delegates about ''fear expressed by the public ... of [deepwater] safety records''.

He said there would ''always be risk'' with deepwater drilling but highlighted that the number of ''incidents'' since the 2000s was down 90%.

After his presentation, Mr Warren said in an interview the industry was ''pushing for zero'' environmental or safety incidents.

On the question of the Deepwater Horizon seabed blowout and subsequent rig fire in the Gulf of Mexico, which became the United States' worst environmental disaster, Mr Warren said it was a combination of human and technological error.

There was now more technology, reliability and competence in the workforce.

''What has evolved around the world is what will be used in the South Island,'' he said.

Halliburton
Halliburton, operating for 94 years, is one of the largest providers in the world to the energy sector, including exploration, drilling and production, parts, analysis and services. It employs about 75,000 people in 80 countries.