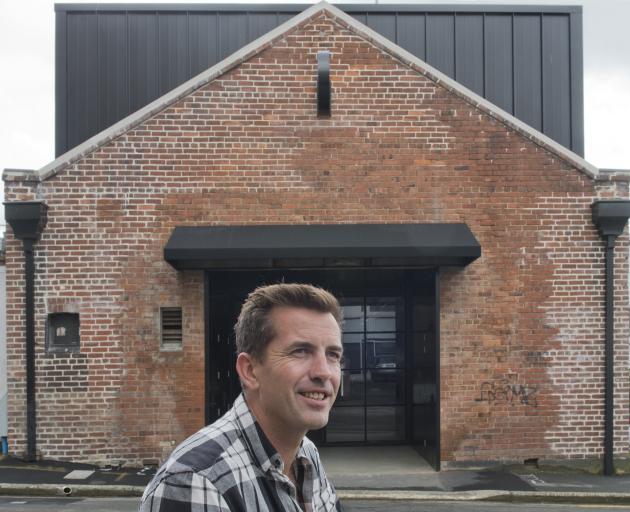 Developer Guy Shallard says a lot of work needs to be done before opening the Arthur or Martha street food site in Bath St, Dunedin. Photo: Gerard O'Brien
It will not be fine dining. It might even be a bit gritty and pokey.

And that is precisely what the developer wants.

The site of a former bar in Dunedin’s CBD is about to take shape as an eclectic street food and beverage destination.

The sign has gone up on Bath St and he is looking for 10 stallholders.

"We want it to be a bit eclectic and pokey and not something where there’s a lot of space to sit down at a table with a whole lot of friends," he said.

"You’re more likely to be standing in a corner behind an old truck, on a bar leaner."

The name Arthur or Martha came from the idea of grabbing something from a few different stalls if you can’t quite decide what you feel like, he said.

"They might grab a craft beer, might grab a bit of Mexican or whatever’s on offer, and try a little bit of everything else from other stalls."

Although access is via Bath St, the site address is 318 Moray Pl.

Five upstairs apartments — four one-bedroom and one two-bedroom — were completed in December and had been leased, he said.

Mr Shallard was inspired to create Arthur or Martha after talking to food people, he said.

"After spending a bit of time in Dunedin, I could see there were a lot of creative up-and-coming people around who probably couldn’t quite stretch themselves to a normal lease on a normal restaurant on a main street, or something like that.

"There obviously is a swing towards more collaborative, smaller affordable spaces in general."

The Moray Pl site is one of two projects Mr Shallard has been developing in Dunedin.

The other site, in St Andrew St near the bus hub, is the Takeichi Ramen restaurant, which opened in October. Work on upstairs apartments there is nearing completion.

He had wanted to complete the Moray Place-Bath St project before Christmas.

Feedback on the Arthur or Martha concept had been good.

"Everyone is behind the idea. Now we just need to convert.

"We got some quite exciting vendors lined up already."

Two key factors were the quality of vendor and fit-out, he said.

"You can probably expect an eclectic mix of materials and stalls.

"We don’t want any of it to look too polished but at the same time very considered."

Cook Brothers had fitted the building with a steel skeleton and a reinforced concrete ceiling but retained the brick shell.

The site now had a 100% NBS rating for earthquake risk.

"It is essentially a new building which has been constructed."