Everything big about digger 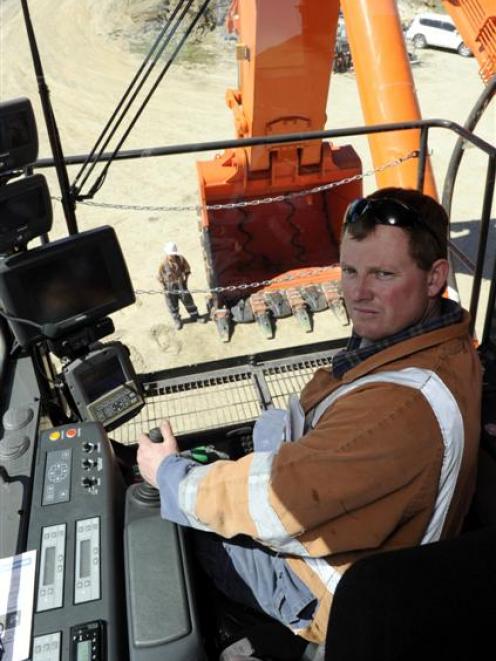 Oceana Gold's Quentin MacLeod is perched high above Oceana Gold mechanic Lee Creighton in the company's new Hitachi excavator. Photo by Gerard O'Brien.
Quentin MacLeod jokes that he never got to play with a 250-tonne excavator in the sandpit at school.

Mr MacLeod, a field service technician at Oceana Gold, was referring to the latest addition to the company's fleet at the Macraes gold mine.

The Hitachi EX2500-6 hydraulic excavator began work yesterday and, while its size is impressive, those working at the mine are used to big machines.

"It's just an excavator. If I looked at a two-tonne excavator, I'd think I haven't got a spanner to fit that; it's too small," he said.

While smaller than its big brother, the 359-tonne EX3600-6 excavator, which is also working on the site, the EX2500-6 was still an impressive machine, with an equally impressive price tag - about $6.8 million.

It also holds about 300kg of grease, but fortunately an auto lubrication system eliminates the need for hand-grease guns.

It arrived in 11 transporter loads and took CablePrice and Oceana Gold staff about two and-a-half weeks to assemble on site.

It did come with quite a comprehensive assembly manual, they said.

It was packed with features, including a comfortable, pressurised cab for the operator, with cameras that showed all corners of the machine, while folding stairs provided easy access to the machine.

A 15cu m bucket was shaped specifically to enhance scooping and loading operations. The machine has a life expectancy of about 60,000 hours.