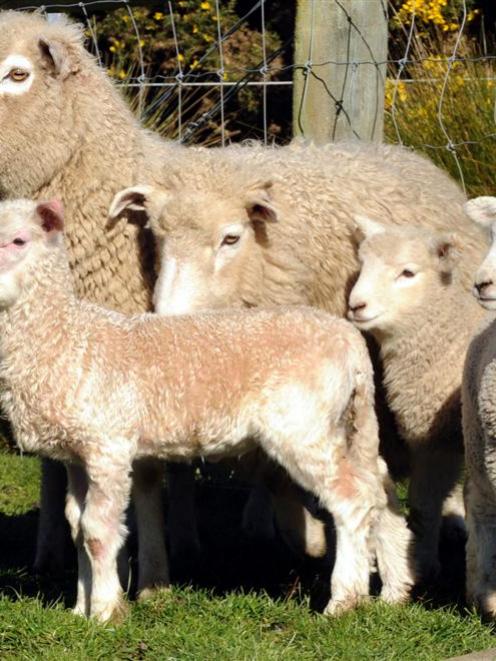 The 'extremely rare' offspring of a goat and a sheep stands with its mother and some mates in a paddock near Allanton yesterday. Photos by Stephen Jaquiery.
When Taieri farmer Graeme Wallace brought a mob of ewes and lambs in for tailing this week, he thought the wool was being pulled over his eyes.

He thought fleetingly there was a chance the ewe in question could have had a dead lamb and adopted a kid but then decided against it. With the body of a lamb, but the head, legs and bleat of a goat, the incredibly rare male hybrid was definitely "a cross between the two".

Mr Wallace, who had not noticed it during earlier daily lambing rounds - not that he was looking out for a geep - said it would have been sired by one of the many feral goats on the property, near Allanton.

It was his father who told him that there might be such as thing as a geep. He looked it up on the internet that night and "sure enough" they do exist. 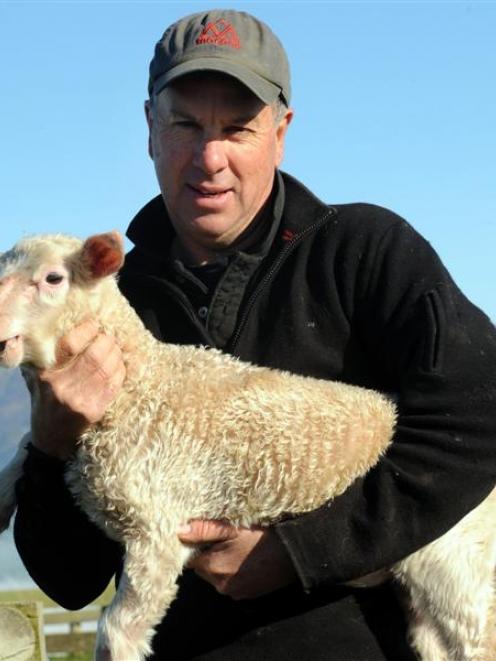 Farmer Graeme Wallace holds the geep.
A report on the natural mating of a doe with a ram which produced a female hybrid, believed to be the first authenticated report of a sheep-goat hybrid in New Zealand, was published in the New Zealand Veterinary Journal in 1990.

Dr Tom Broad, who was involved with tests on that animal and unsuccessful attempts to breed from it, said hybrid offspring from a sheep-goat mating were "extremely rare" and he likened it to breeding a mule - a horse-donkey cross.

They could be referred to as a geep, or a shoat, depending on individual preference, he said when contacted yesterday at his Nelson home.

The offspring were usually infertile but that was not always the case and in some very rare cases they had been known to breed.

The "clincher" to confirm the geep's parentage would be to get a blood sample and do a chromosome analysis. It would also be easy to collect semen from a male geep to see if that semen was viable.

Mr Wallace, who decided against castrating or tailing the animal, was not sure what would happen to the geep, which was referred to simply as Geep.

"We might just keep it. It's just a novelty."

Meanwhile, the "freak of nature" was oblivious to its uniqueness, while its mother was unfazed by her unusual offspring.