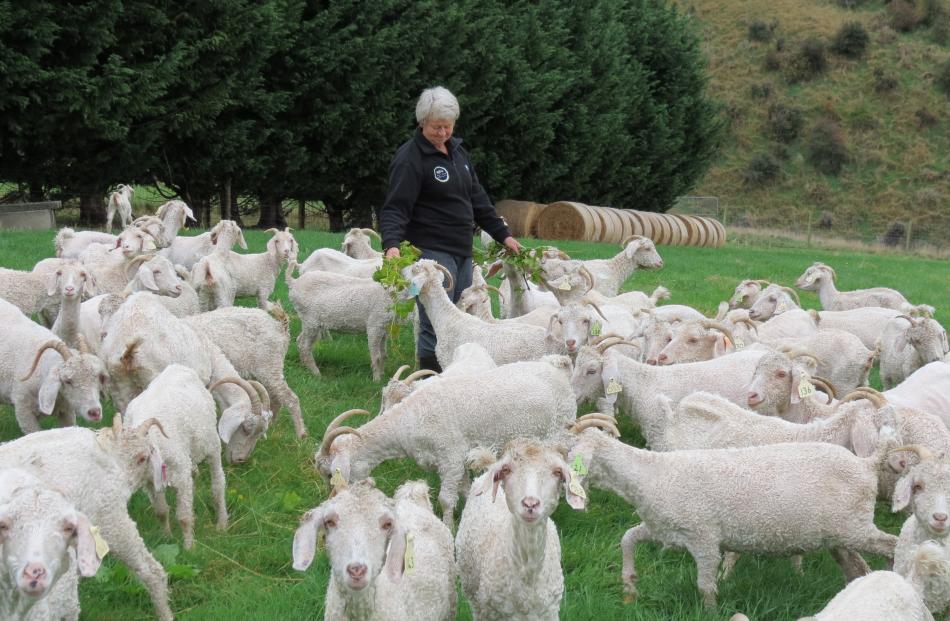 Mohair goat breeder and fibre classer Irene Campbell, of Dumbarton, along with her husband Bill, will host a field day for visitors attending the New Zealand Goat conference in Queenstown next month. Photo by Yvonne O'Hara

The possible reintroduction of an industry levy and ''the way forward'' for profitability and sustainability for the goat industry will be the focus of the inaugural New Zealand Goats (NZGoats) conference in Queenstown next month.

Mohair New Zealand Inc, Meat Goat New Zealand (MGNZ), the New Zealand Boer Goat Breeders Association and NZGoats will all be holding their annual meetings during the same weekend, May 23 to 25.

NZ Goats chairwoman Dawn Sangster, of Patearoa, said those interested in feral or dairy goats or in the industry in general were also invited.

It is the first time that a combined industry conference will be held.

Mrs Sangster said as the industry was small the joint conference was an opportunity to combine resources and attract better speakers.

''I am quite excited about it,'' Mrs Sangster said.

''It will be a chance to learn about each other.''

She hoped the conference would attract at least 60 people and it would be an ideal opportunity for them to network.

''People can brainstorm and take ideas away.''

Federated Farmers Meat and Fibre Chairwoman Jeanette Maxwell will speak about the requirements and merits for an application to introduce a levy under the Commodity Levies Act to help raise funds for the group.

A wool and goat levy was discontinued in 2010 following an industry referendum.

''People will be able to hear about the levy and understand what the process is,'' Mrs Sangster said.

''They are not necessarily going to do it but it is one possible option.''

Accumulated funds of $115,000 were distributed to five research and administration projects as a result, including programmes for Wormwise for Goats, developing a set of guidelines for feral goat stockmanship, effective drench dose rates for goats and developing a saliva test for parasites.

Projects reports will be given during the conference.

Other conference speakers include AgResearch scientist Richard Shaw, who will talk about his work on reducing parasite costs, consultant Helen Darling, who will discuss supply chain issue and Beef and Lamb New Zealand's Fiona Carruthers talk about the value of goat meat to consumers.

Two field trips have been arranged: to Bill and Irene Campbell's mohair goat property near Roxburgh and to Dave Aitkens' Boer goat farm in Gibbston Valley.

There will also be discussions about issues affecting the industry, which, although a niche market, the demand for goat products is increasing domestically and internationally.

NZGoats was established last year to determine the necessary steps to add value to the industry.