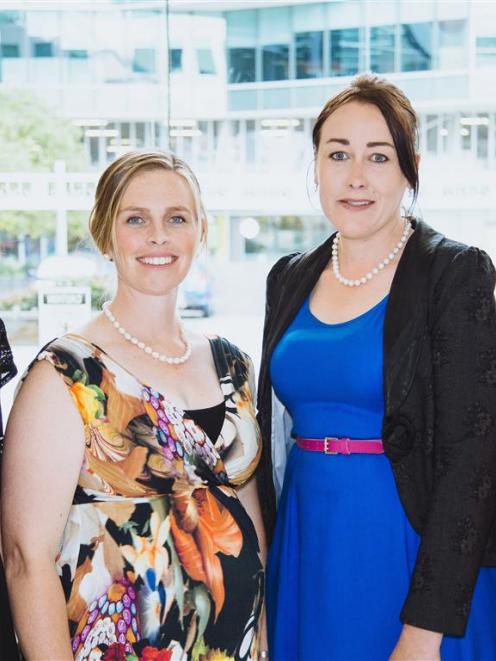 South Islanders (from left) Helen Blom, of Southland, Rebecca Dondertman, of Culverden, Angela Leslie, of Buller, and Angela Darke, of South Canterbury, have graduated from the Agri-Women’s Development Trust 2015 Escalator programme. Photo by AWDT.
When Dutch couple Helen and Art Blom came to New Zealand in the mid-1990s, it was to be only a temporary stint.

The couple, who had studied agriculture at university in Holland, intended to work on a farm for a year.

But they ended up ‘‘staying forever'', Mrs Blom, who recently graduated from the Agri-Women's Development Trust's 2015 Escalator programme, says, laughing.

Mrs Blom's parents were dairy farmers. Mr Blom did not come from such a background, although he always wanted to be a farmer.

It took only about two months, working on a farm at Hinds in Mid Canterbury, to work out ‘‘why farm in Europe'' when they could farm in New Zealand.

They were drawn to New Zealand by the opportunities and the sheer amount of land. ‘‘We felt we could be pioneers and be entrepreneurs.'' After that first year, they moved to Murchison as lower order sharemilkers for two years. They then applied to Tasman Agriculture for a 50:50 job in Invercargill.

There were lots of challenges but, because of them, there was more opportunity to focus on areas ‘‘where you have your own strengths'', Mrs Blom said.

There had been much change in Southland since they first moved south. When they went to Balfour, it was a ‘‘bit of an unknown'' but now there were many dairy farms in the area and it had proven itself, she said.

Another big change was in the air as the Blom family - they have four children - was moving to Marlborough next year, having invested in a lodge which they are going to run. They are retaining ownership of their farms.

They had been looking for a change and it was an exciting opportunity. The children were keen to give it a go and they would run the lodge as a family business.

Mrs Blom was one of 13 women who graduated from the Escalator programme. They came from Northland to Southland, bringing the total number of graduates to 66 since the 10-month programme began in 2010.

Created as a result of AWDT's research into the role of women in agriculture and low participation rates at leadership and governance levels, the Escalator programme includes five Wellington-based modules, individualised distance learning, coaching and mentoring supported by the trust and industry organisations.

Mrs Blom had cut out an article about the Escalator programme several years before deciding to apply for it.

It was a big commitment and she needed to have the time to devote to it. She had the support of her family, she said.

She was driven by a desire to increase her skills, whether financial, leadership, governance or inter-personal, and build a network of strong leaders in the agricultural sector.‘‘I made a commitment to myself, whatever I have to do, I'll give it my best shot,'' she said.

The programme exceeded her expectations and had given her the tools, insights and help to create a network. It was now up to her to utilise those skills and put into practice and ‘‘take it to the next level'', she said.

It was a diverse group of women, from different occupations, ages and stages of life. She encouraged other women to apply for the course, saying it provided exposure to all sorts of tools and leadership styles, and also to people in the sector.

This year's graduates, who had careers in dairy farming, sheep and beef farming, marketing, medicine, banking, journalism, resource management and information technology, were urged to show ‘‘fearless leadership'' at their graduation in Auckland.

KPMG executive chairman Ross Buckley said fearless leadership was about embracing risk and uncertainty, and stepping into the unknown.

‘‘Our country's future prosperity relies on our ability to inspire and create leaders who are determined to see New Zealand succeed. ‘‘We need to challenge ourselves to be bold, ambitious, generous, visionary, provocative and fearless.

''It's about building a collective vision, seeing through problems to possibilities, empowering those around us and working together,'' Mr Buckley said.

They were leading within industry organisations, corporates and sitting at the decision-making table in governance.

‘‘These women bring wide perspectives from their rich experiences in current and former careers, as mothers, as wives and through their community involvement,'' Mrs Nelson said.