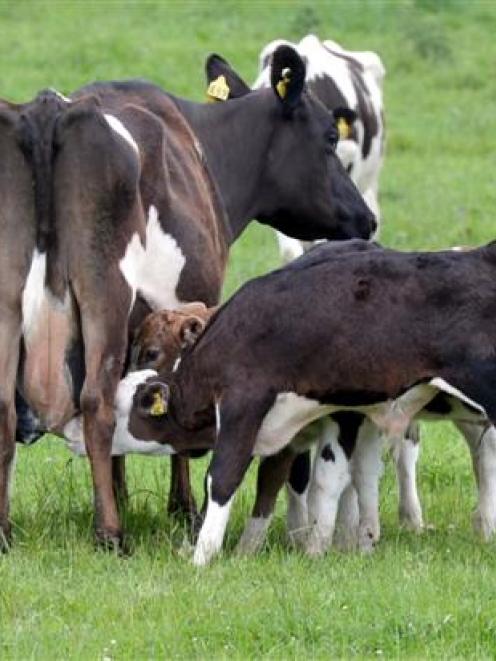 Milk powder prices might be soaring but cheese and casein are generating much lower returns for Fonterra. Photo by Stephen Jaquiery.
Fonterra has unexpectedly left its forecast milk price unchanged at $8.30 and slashed its dividend by 22c, due to what it describes as an ''extraordinary situation''.

The surprise announcement yesterday means a forecast payout of $8.40/kg ms for the 2013-14 season, much lower than the predictions of some economists who thought it could tip the $9 mark, although still a record.

Fonterra has attributed its decision to the disparity between very high milk powder prices, and those for cheese and casein.

Market reaction was most pronounced in the Fonterra Shareholder Fund, as units dropped as low as $5.48, below last year's issue price of $5.50.

The forecast 10c dividend meant lower farmer incomes by about $300 million this season, on a fully shared up basis.

However, that must be put in the context of a $4 billion increase in farm income compared with last season, ASB rural economist Nathan Penny said.

However, it had not been able to lift powder production above the current 70% level as it was limited by its production facilities.

The remaining 30% of milk was converted to cheese and casein which were generating lower returns, caused by domestic factors in key markets such as Europe, the United States and Japan.

Fonterra chairman John Wilson said the board had the discretion to pay a lower farm-gate milk price than that specified under the milk price manual, which would have resulted in it rising to $9.

Given the current volatility, the forecast might change over the course of the season, Mr Wilson said.

The forecast milk price was still a record and, with a 30c increase in the December advance rate payout to $5.80, farmers could continue to feel positive about the outlook for the season, Mr Brown said.

Federated Farmers dairy chairman Willy Leferink said farmers would be pleased with the confirmation of the $8.30 forecast, but less pleased to see the dividend forecast cut by two-thirds.

The dividend was a direct marker to the financial performance of Fonterra as a company, he said.

Management needed to note concerns that shareholders would have on the value-add, which seemed to be struggling, he said.

Forsyth Barr broker Andrew Rooney said that yesterday's announcement did little to ease Forsyth Barr's concerns over the conflicts of interest inherent in the Trading Among Farmers structure.

Fonterra was attempting to manipulate returns to farmers - its most important stakeholders - and ease the impact on unit holders.

That manoeuvring would only increase uncertainty as to co-operative behaviour in future. Forsyth Barr retained its reduce recommendation, he said.

Fonterra Shareholders Fund has been downgraded to a sell by Craigs Investment PartnersIn a research report, the firm said it was looking for Fonterra to show signs of improved underlying earnings performance associated with its strategy, a greater degree of transparency and visibility in the business, and for a turnaround in the underperforming Australian operations, over the next 12 months.