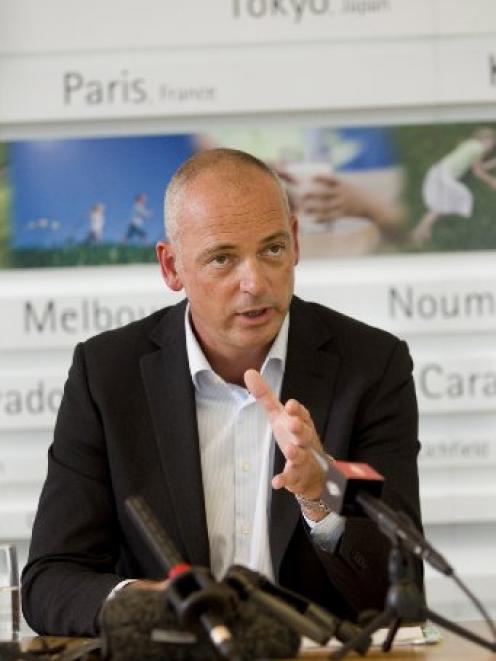 Theo Spierings
Fonterra Co-operative Group, the world's largest dairy exporter, has set targets of becoming the No1 dairy player in China and doubling its business in the country to $10 billion within the next five years.

When asked whether that would expose the co-operative to too much risk in one country, he said China's provinces could almost be regarded as countries in their own right.

''Local governments are getting much stronger,'' he said. But the company was also driving growth throughout Southeast Asia and into Latin America, Mr Spierings said.

China and Russia, the biggest dairy markets in the world, had reduced demand for different reasons in the past 12 months but chairman John Wilson said Fonterra had shown it had the strength to sell into other markets as well. In the past three months, demand in China had been returning as inventory levels dropped.

Mr Spierings said the next business plan would consider the right timing to resume production in China. This would be considered by the management team in March-April and the plan put before the board in June.

He said Fonterra did not want to build ''assets for assets' sake'' and there had been considerable interest from potential partners, many of whom were customers, in working with the co-operative on its manufacturing needs in China. Even without that partner, it could still make sense to go ahead once fresh milk produced by its own farms reached sufficient levels of about 400 million litres annually.

Fonterra's managing director of international farming, Alan van der Nagel, said last week the co-operative would take another two years to become profitable after posting a loss of $44 million in the 2015 financial year. The company is proceeding with a $US300 million ($NZ456 million), 51:49 joint venture with Abbott Laboratories to build a third farming hub, which Mr van der Nagel said would enable the group to produce 600 million litres a year from its three China hubs.

Under Fonterra's new strategy, its China business would comprise 60% ingredients, 20% consumer and 20% food service. Christina Zhu, managing director Greater China, told the meeting Fonterra had set some challenging targets for the 2016 financial year but the business was off to a strong start.

E-commerce was ''changing the game'' in China, where huge growth was expected for sales online, for food in particular, she said.

The Beingmate Baby & Child Food Co partnership, in which Fonterra has invested $750 million to take an 18.8% stake, was a key factor in Fonterra's success in China, she said.

''This is something we need.''

The joint-venture agreement to run Fonterra's loss-making Darnum plant in Queensland has been approved by Beingmate's board and shareholders.

Zhu said Beingmate had struggled last year along with a lot of other Chinese companies and had put steps in place to turn things around. Beingmate's changes were already taking effect, with better results in the third quarter, and that was expected to increase in the following quarter, she said.