GDP could rise about 1% 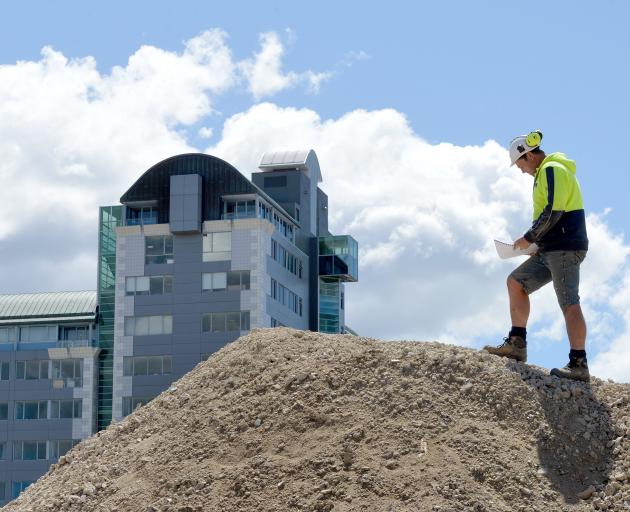 Fourth-quarter GDP expected to wane, but construction remains strong. Pictured, Cook Brothers Construction site foreman Scott Milne checks plans at the former Wickliffe Press site in January, while the Commerce building (background) is undergoing a multimillion-dollar upgrade. Photo by Stephen Jaquiery.
Fourth-quarter gross domestic product (GDP) growth is expected to be steady near 1%, but Kaikoura's November earthquake could take the gloss off growth in some sectors.

Statistics New Zealand is scheduled to release the GDP data on Thursday.

Analysts' ranges for the fourth-quarter GDP are from gains of between 0.5% to 1%.

ASB senior economist Jane Turner expects the growth rate would be close to the Reserve Bank's 1% forecast in February, and she was picking 0.9% ''steady, solid growth'', quarter on quarter.

The construction and the service sector would continue to underpin economic growth, but Mrs Turner expected ''robust growth'' in other sectors, too, with strong growth in hours paid for public services, such as healthcare and social assistance and public administration and safety

''The wild card for the quarter will be the impact of the Kaikoura earthquake and associated disruption throughout the top of the South Island and bottom of the North Island,'' Mrs Turner said.

She noted the fall in dairy production during the quarter was likely to be a ''mild drag'' on agricultural GDP.

Westpac economist Sarah Drought said following the ''heady'' 1.1% GDP gain for the quarter to September, she expects a ''modest'' 0.5% gain.

She also identifies the construction sector to be one of the strongest contributors to GDP, with primary production and manufacturing likely to be the most significant drags on growth.

''We expect the December quarter national accounts to paint a moderate picture of the New Zealand economy,'' she said

She said that was weaker than Westpac had been expecting and was also below the 1% forecast by the Reserve Bank in February.

She said September's strong GDP result was boosted by especially strong gains in some areas, but which now look to have been pared back.

''There were a couple of factors dragging on growth in the December quarter, including declines in milk and meat processing, that will bounce back in March, while the Kaikoura earthquake in mid- November likely displaced some activity,'' Ms Drought said.

She picked construction again to be one of the main growth areas.

''Increased demand from a rising population is expected to show through in some of the services categories, with personal services, such as healthcare and arts and recreation, expected to record strong growth.

However, businesses services were looking softer this quarter after a string of solid gains, and retail spending was surprisingly moderate, against strong gains in the population and tourist numbers.

Notable growth drags will be primary production and manufacturing.

Ms Drought said agriculture looked to have dragged on growth for the second consecutive quarter, as damp spring conditions continued to weigh on milk production.

The very slow start to the slaughter season weighed on food manufacturing.

''However, with milk production recovering well in early 2017, agriculture should finally return to the positive side of the ledger in the March quarter,'' Ms Drought said.