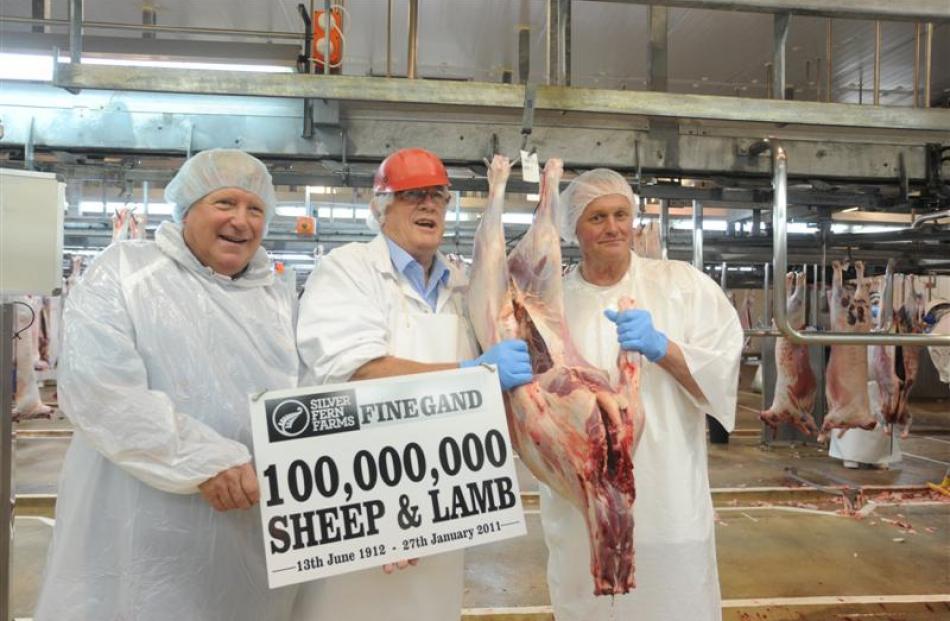 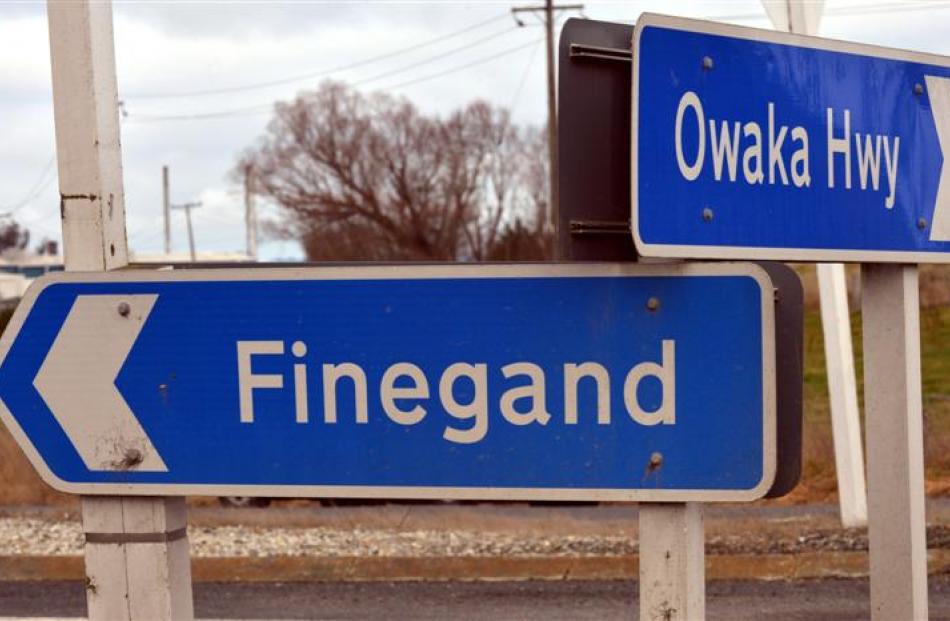 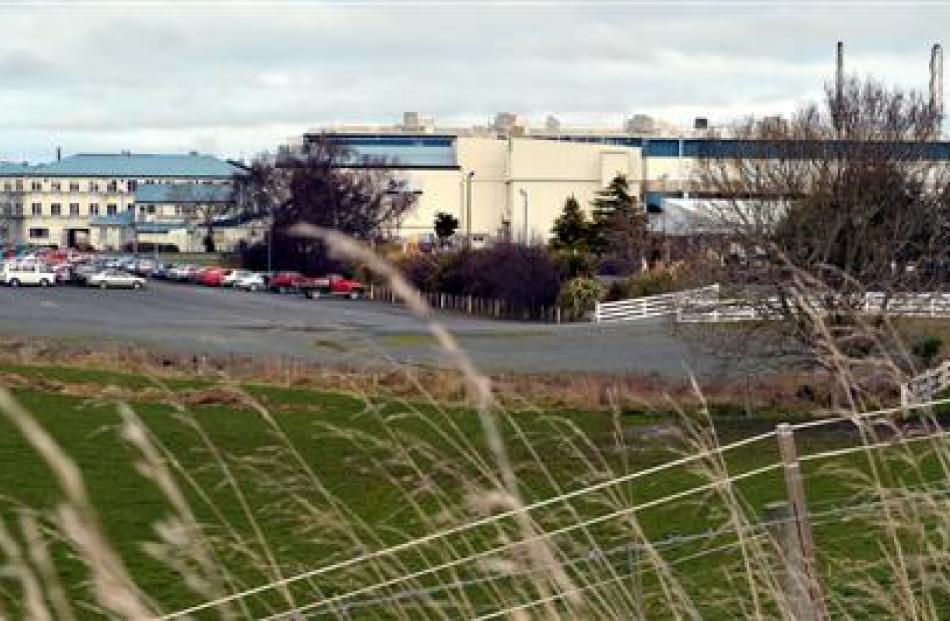 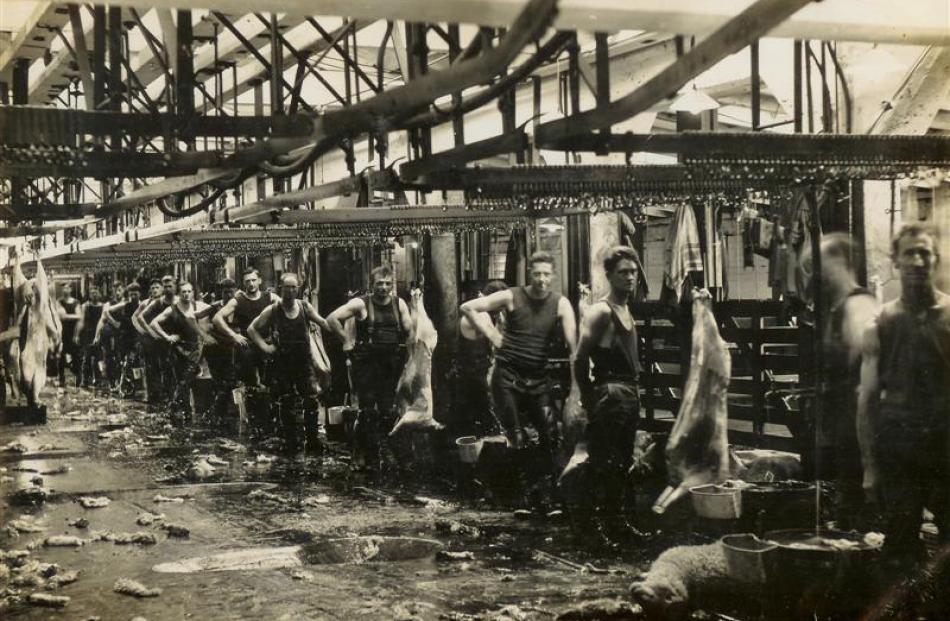 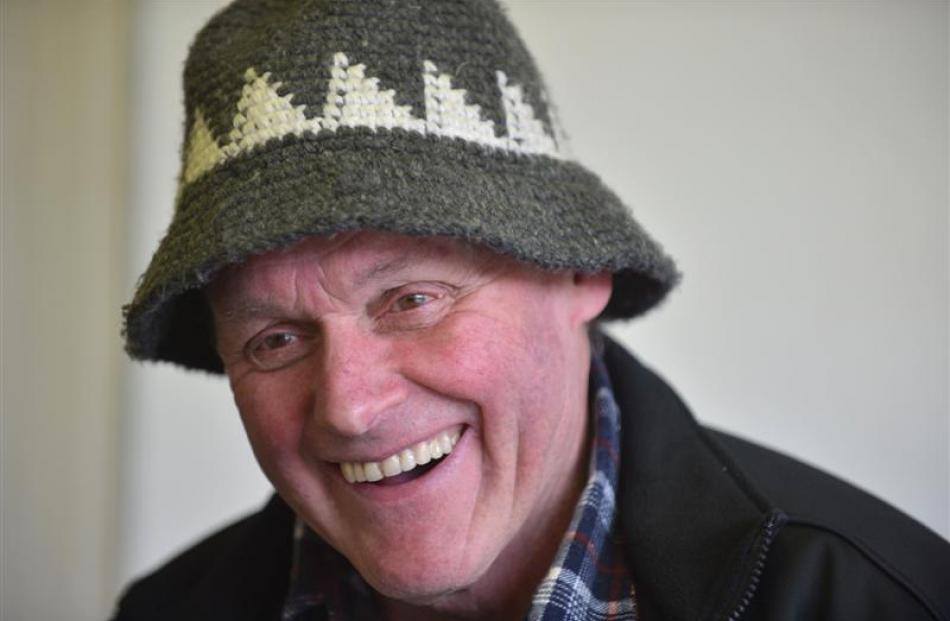 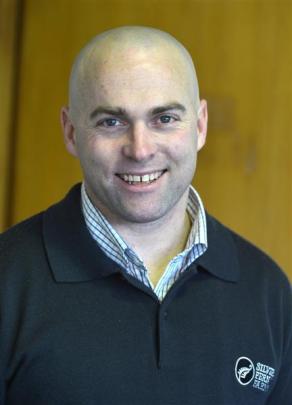 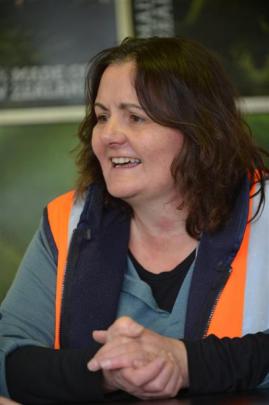 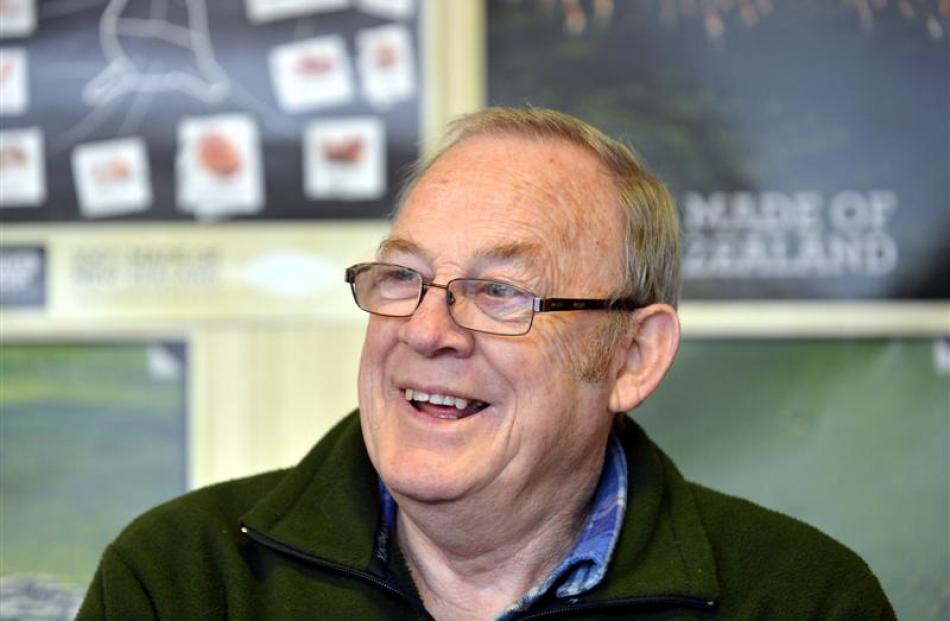 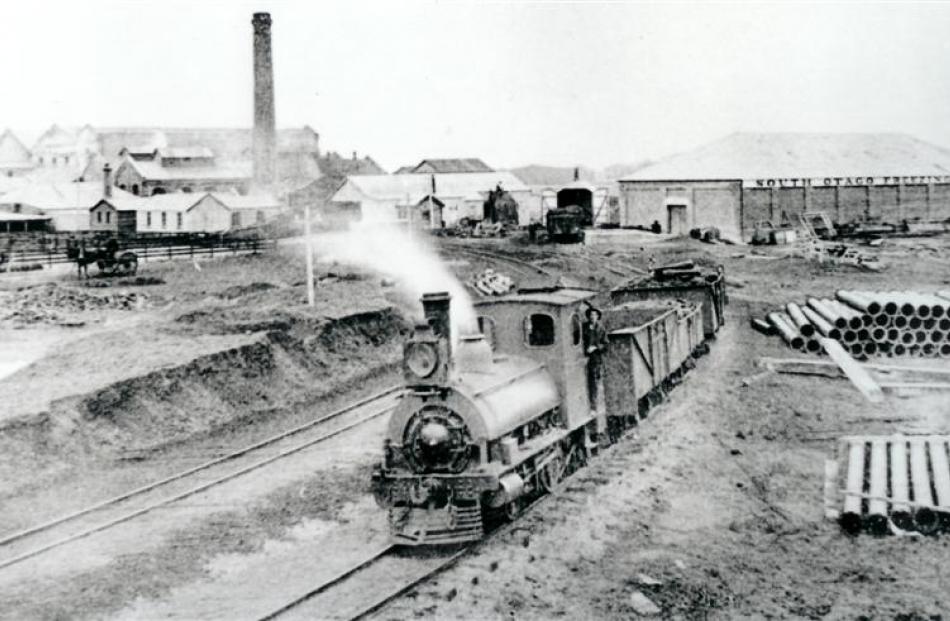 A train delivering stock for slaughter to the Balclutha works which is celebrating its 100th year in operation. Photo by South Otago Museum. 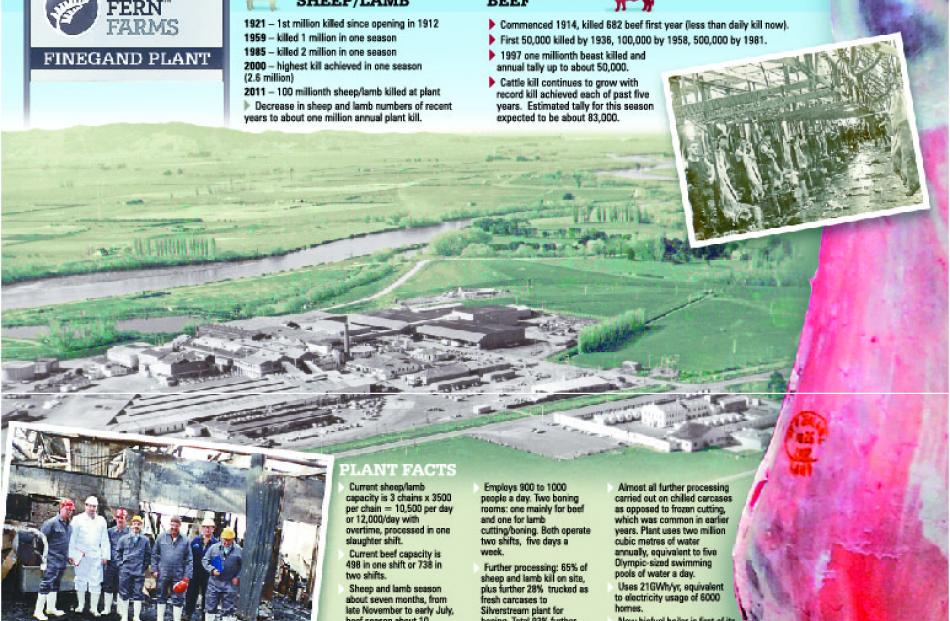 Silver Fern Farms' Finegand plant celebrates its centenary this year. Agribusiness reporter Sally Rae visits the South Otago meat-processing plant - described by one employee as the "glue for the community" - and meets some of the characters who work there.

When Garry Williams started work at Finegand back in 1960, it was the days of "black singlets and smoking on the chain".

Carcasses were bagged in stockinette bags, there was little technology and the work was heavy.

"When you're looking at 30kg to 40kg carcasses falling from 4m, it was like being hit with a 40kg hammer.

"There were broken bones, people lost fingers. All that sort of stuff's gone now."

Not surprisingly, the most major changes Mr Williams had seen at his workplace over more than half a century were to hygiene processes.

But there had also been many more changes, both at the plant and in the wider industry.

These included health and safety improvements and cutting-edge technology, making the workplace safer and more efficient. Meanwhile, changing markets meant most of the product was now sent away chilled.

When Mr Williams first arrived at Finegand, most of the stock was driven by road, while the rest came by train.

There could be 60 railway wagons loaded with sheep for the day's kill and trucks were in the minority.

And those trucks used to be Bedfords. Now they were "quarter of a million dollar jobs".

Mr Williams was 15 when he got a job at Finegand as a "string boy", putting neck strings on carcasses on the slaughterboard, for a weekly wage of about four pounds, eight shillings.

That was "huge" money for the teenager, as he recalled a packet of cigarettes cost about two shillings.

His uncle was a fitter at the plant and got him the job. When he arrived on his first day, he was taken to the office on the slaughterboard and told to wait there. That was at 8am and he was finally noticed again, and dealt with, at 11.30am.

He progressed through the ranks and was a freezer foreman until he hit 65. For the past two seasons, he worked a 30-week contract on the cooling floor.

When he turned 65, he said he would stay on for three years.

While unsure of his plans, he said he might want to "go fruit-picking or something" at some stage. He had always worked through summer.

Originally from Auckland, Mr Williams moved around a lot when he was young and became tired of that. He liked the community spirit in South Otago.

Finegand was "hugely important" for the district, not just for its workforce but also the other industries and businesses it supported.

He had seen lots of changes, including the closure of the likes of Benhar Pottery, flax mills and the loss of inpatient surgical services at Balclutha Hospital, and Finegand had remained "the glue for the community".

Mr Williams enjoyed the people at Finegand and he believed they constituted the strength of the works.

"I didn't set out to break any records. I just keep coming to work," he said simply.

Slaughterman Michael Brown (69) retired earlier this month after 50 years at the plant.

He spent the first eight years living in a hostel over the road from the plant, which housed up to 200 workers.

It was, he acknowledged sagely, "a lot of fun". "It was sort of a life within itself," as he recalled sly-grogging in the days of 6pm closing, inter-works rugby matches and the "real characters" who lived there.

And high jinks were not just limited to the hostel. "Some of the things we used to do years ago, now from a health and safety point of view ...."

People were picked up and tossed in tubs of water, meat was thrown and cigarettes stubbed out on carcasses. "But nobody died from eating roasted mutton," he said in his matter-of-fact way.

Mr Brown also became involved in union matters, serving as president of the Finegand union for the past 17 years, and he was always trying to better wages and conditions.

"I never raise my voice, I just keep ploughing on, push the issue," he said.

While he would miss the camaraderie and the people, he was philosophical about retirement which, at this early stage, felt just like another off-season.

"Like a book, you close that page and open another."

His long working life was even more remarkable given he described himself as "all artificial, tin hips and tin back".

He even broke his neck once when felling bush, not that he could remember when that happened.

"They said on paper I had a 25% disability, but I just kept coming back to work," he said nonchalantly.

Still, he expected he would find interests to keep him busy.

"For years I did scuba diving and I can't do that any more. Too old, worn out. I might have to take up bowls."

When Fiona Ward started work as a laboratory technician at Finegand in 1980, she and her husband - a teacher - planned to stay in the area for two years.

She was assistant plant manager before she left to have a family and later returned to "fill in" when a laboratory technician went on maternity leave.

Next thing, she was doing a systems administration role then moved back into a plant technologist role, before becoming production manager.

The job involved making sure all the stock that came in the gate was processed to meet the customers' specifications.

It was an industry that was changing all the time - "there's never a dull moment" - and Mrs Ward enjoyed the challenge and the people.

While there were always a lot of women employed at the plant, only one before her had broken into a management role.

Her job required good time management and communication skills, adaptability to change and an ability to prioritise, she said.

As the plant's health and safety co-ordinator, Matt Sadgrove has to make sure the hundreds of employees, contractors and salaried staff "go home each day in one piece".

That was bearing in mind that it was a meat-processing factory, where the dangers included chemicals, forklifts, machinery, slippery floors, knives and stock.

There were "hazards everywhere", Mr Sadgrove said, but he was up for the challenge.

He is also part of the plant's rescue squad.

He started at Finegand in 2009 as a chamber-hand in the load-out team - or, as he puts it, a paid weight-lifter, putting boxes in containers.

Originally from Auckland, where he taught martial arts full-time and represented New Zealand, he came south to support a friend who was going through a tough time.

He fell in love with the district - and also found love - and decided to look for employment.

Finegand was a place where there were plenty of opportunities for a person to prove themself and advance their career, he said.

Mr Sadgrove said he got out and about in the plant as often as possible. He was constantly reviewing operating procedures to ensure they were safe and reviewing and assessing new machinery.

Strains, sprains and cuts were the biggest injury factors and he was always trying to improve the environment employees worked in.

Now living in Kaitangata with his "good Southern girl" and young family, and also serving as a volunteer firefighter, Mr Sadgrove is very settled in the South.

"I'm finding people in Auckland [are] like fish and chips. It's there, but you have to get rid of the newspaper and batter.

"People down here are fresh out of the sea - you get what you see. People are honest and open. That's refreshing to me.

"No-one calls me a Jafa down here. They just call me Matt."