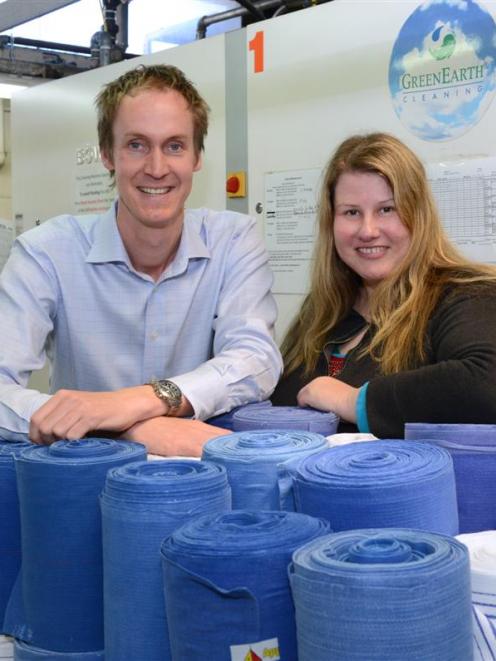 Miss Rose, who is completing a master of design enterprise course, has been working with both Preens Dry Cleaners and Southern Clams for her thesis on tailored communication strategies for companies' best sustainability practices.

At Preens, she was liaising with business manager and director Rick Wellington and looking at ways to increase levels of sustainability.

Coming from the point of view of an independent observer, she said it had been a learning experience, as she gave the example of continuous towels.

Before her involvement with Preens, she had always used air driers but, after reading research, she realised continuous cotton towels were ''far more hygienic'' than air driers and used less energy overall than paper towels.

Miss Rose prepared the company's entry in the Westpac Otago Chamber of Commerce Business Awards, where it won the sustainability award.

Preens Dry Cleaners was established in the 1920s and has been owned and operated by the Wellington family since 1979.

The company expanded into workwear rental in the 1980s under the New Zealand-wide Apparelmaster franchise, supplying and cleaning overalls, mats and towels.

About 55 staff were employed at premises in Dunedin, Gore and Oamaru.

Preens monitored all its energy and was in its second year of being involved with the Instep carbon and sustainability programme.

The latest report showed the company had dropped usage of lpg by 11% and lowered its carbon emissions by 6% in the February quarter.

Hanger recycling was promoted, biodegradable bags were used for the return of customers' garments and there was a recycling programme.

The company encouraged the reuse of textiles and the likes of tea towels and bar wipes, which were used by cafes and restaurants, were then sold as rags at the end of their life.

An employee-led sustainability subcommittee had been established, looking at ways to improve sustainable practices in the factory and stores and oversee the company's recycling programme.

The company was constantly reinvesting in new equipment, including driers that reused 70% of the air. Lasers detected when the textiles were dry, as opposed to timers, Mr Wellington said.

It had been a very enjoyable project for Miss Rose and she enjoyed working with Mr Wellington who was ''so enthusiastic'' about trying to become more sustainable.

She was also keen to spread the word as to what businesses were doing in the sustainability space.

As part of her thesis, she was developing a model measuring sustainability in small to medium-sized businesses and she hoped to offer that service to businesses in Dunedin and its wider area.

Mr Wellington said winning the sustainability award was ''fantastic'' and a chance to reflect on what the business was doing, while also looking at what else it could do.

''We're only just getting started. If it makes economic sense and staff want it and its good for the environment, it's a triple benefit,'' he said.