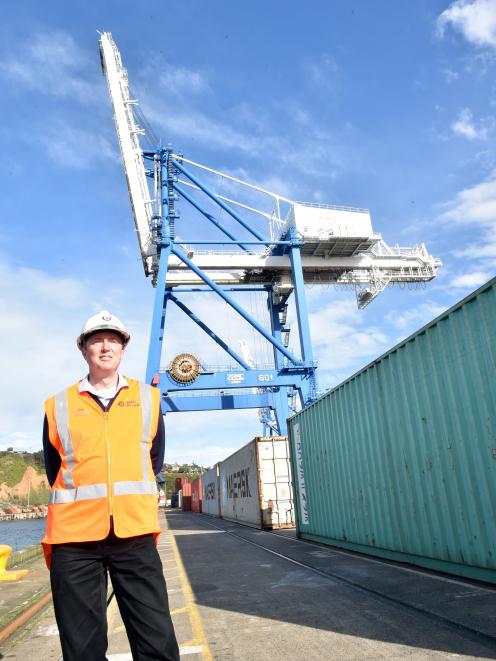 Three years ago, Port Otago ordered more than $2.5 million worth of electrical upgrades for its two container cranes — Crane 3 and Crane 4.

While the cranes have an expected life of about 25 years from when they were installed in 2005-06, their various components require occasional renewal.

The upgrade is to replace the entire drive and control systems that run all of the largest motors on the cranes.

The cranes cost $US5.8 million originally and would now cost $NZ18 million to replace.

Crane 3 also needs a larger reel for its self-laying 11kV cable, the prominent circular coil mounted halfway up the side of the crane.

That will enable it to carry a longer cable so it can reach the end of the recently extended multipurpose wharf.

Due to the increase in cable weight, it also requires larger motors and gear boxes to rotate it.

While Crane 4 had its upgrade completed by specialist technicians from Siemens Australia and China in 2019 just before Covid-19 hit, the upgrade for Crane 3 — planned for the 2020 low season — never happened as the technicians were unable to enter New Zealand due to pandemic restrictions.

Port Otago infrastructure asset engineer and project manager for the upgrades Jon Visser said the crane was finally getting its upgrades and it was "all go".

Nine electrical cabinets worth $1.25 million were being replaced in the engine room at the top of the crane by technicians from Globetech Australia.

A team from Siemens Australia and China would then commission them to ensure all the motors and control systems were running correctly.

Once that work was completed, the cable reel system would be replaced and a third crew of technicians from ZPMC China would commission that.

The port company had tried many times to get approvals from the Government for the foreign technicians to enter New Zealand through managed isolation and quarantine, Mr Visser said.

"What made this impossible was that we required the whole installation team to be present at the same time, whereas the Government would only process individual applications and we could not make block-bookings for MIQ.

"Now that the borders have opened, we can finally proceed with this work."

The components for the upgrades had been stored in crates in the cruise terminal since 2020.

"We’re very happy to finally see these crates being removed so that we can get the terminal ready for the return of cruise ships in October," he said.