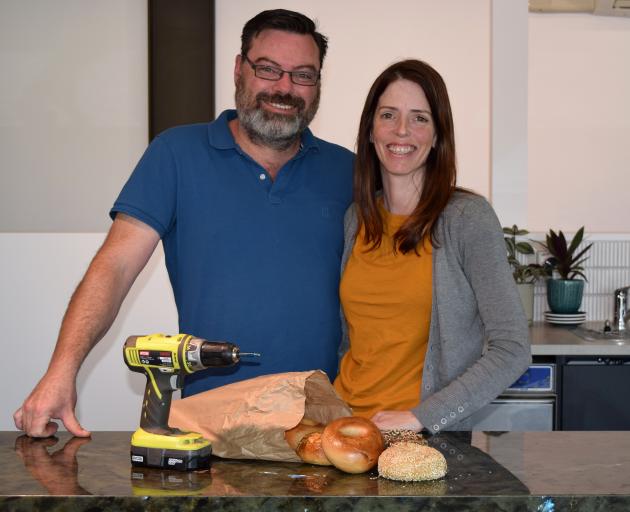 Beam Me Up Bagels co-owners Chris and Ellen MacGregor are preparing to open another shop in Dunedin tomorrow. PHOTO: SHAWN MCAVINUE
A Dunedin bagel business has ‘‘taken off’’ and has now opened another shop in the city on Friday.

Beam Me Up Bagels co-owners Chris and Ellen MacGregor, of Helensburgh, began selling their bagels from a stall at Otago Farmers Market in 2014.

A couple of years later they opened a shop in North Rd, North East Valley.

Mrs MacGregor said the shop in ‘‘the valley’’ was running at capacity, especially in the weekend.

‘‘We physically can’t make more bagels in a day.’’

On Friday they opened another shop on the corner of Great King St and Albion Lane.

The plan had been was to open the new shop in late January but fitting­ out a new business over the Christmas and New Year period was challenging as many suppliers were on holiday.

The fit out had been stressful but the nerves leading up to opening were ‘‘pretty good’’.

‘‘We are really excited by this space.’’

The new shop had at least twice the floor space of the valley shop and had seating for up to 40 people.

The valley shop had seating for eight people and many customers who would have liked to dine-in had to take away, she said.

‘‘We get very cosy in the valley — the staff are used to working shoulder-to-shoulder.’’

The number of staff the business employed — a mix of part and full­time — had risen from 12 to about 20.

The staff would work between the two shops.

The new shop would release ‘‘pressure’’ from the valley shop, she said.

‘‘The valley is very little and very busy, so if it quietens off just a little bit it’ll be nice for the team there.’’

The menu, the hours and the recipe — including kettle boiling the bagels in malt and water and hand-rolling them— would remain the same in both shops.

‘‘The bagel-making is the heart and soul of the business.’’