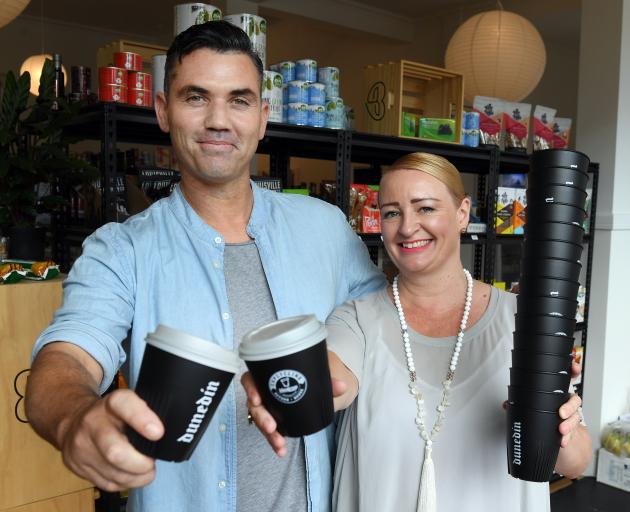 Nick Maguire, of the Kind Grocer, and Steph Fry, of IdealCup, show the first of the cups to be launched in Dunedin as part of the CupCycling initiative. Photo: Stephen Jaquiery
''CupCycling'' is all go in Dunedin.

The initiative, aimed at lessening the number of disposable cups polluting the environment and reducing waste in landfills, officially launches in the city today, coinciding with Orientation Week.

CupCycling - the brainchild of Motueka couple Nick and Steph Fry, of IdealCup - involved a customer paying a one-off ''bond'' as a membership to the programme, and then getting ongoing use of a reusable cup from any participating cafe.

They returned the dirty cup to participating cafes, got a clean cup with their drink and paid for the drink.

The initiative was launched in the Tasman region in July 2017 and has been rolled out to other regions, as well as British Columbia in Canada.

Mrs Fry, who was in the city for the launch, said the response from Dunedin at large had been ''absolutely fantastic''.

While 15 cafes were launching the initiative today, more were coming on board and so that number would increase. ''It means we've created something people want to be a part of,'' she said.

Participating outlets could text their weekly statistics - the number of single-use cups diverted from landfill - to IdealCup to track the difference they were making.

There had been ''fantastic'' support from several key people to help get it running, including Leigh McKenzie (Dunedin City Council), Allison Wallace (Keep New Zealand Beautiful), Laura Cope (Use Your Own Cup cafe guide) and Dunedin city councillor Damian Newell.

Launched in 2010, IdealCup was the first to design and manufacture a New Zealand-made barista grade, BPA free, reusable cup.