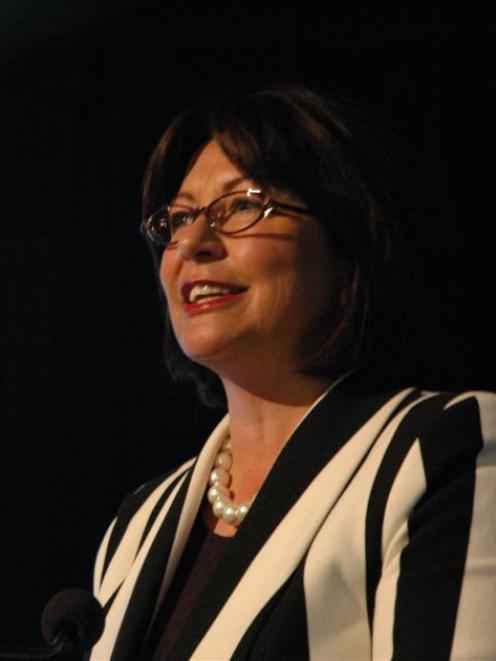 Acting Energy and Resources Minister Hekia Parata at the Queenstown mining conference opening yesterday. Photo by nzresources.com
"Incremental" legislative changes and engaging with affected communities were prevalent themes at the opening of the New Zealand branch of the Institute of Mining and Metallurgy (AusIMM) annual conference yesterday.

Both politically and economically, the potential for boosting the financial contribution from New Zealand's mining sector remains at the forefront of development arguments.

Acting Minister for Energy and Resources Hekia Parata, in the job for just six months, struck a positive tone in a presentation well received by the more than 270 delegates.

She drew together the threads of potential iwi investment in the sector and growing women's roles in the industry, and outlined legislative changes in place which should assist sector participants in permitting and Resource Management Act issues.

High on her agenda, and later reiterated by Oceana Gold, Newmont and Solid Energy, was the need for communication with communities, or a no-brainer approach" to talking directly with communities as an expected best business practice".

She continued the theme of her predecessor, Senior Minister Gerry Brownlee, that the mining sector provided the opportunity for a significant" contribution to the country's gross domestic product. The sector turned over about $2 billion last year, including domestic roading and construction aggregates.

She did not shy away from land access issues, and spoke about the reclassification of Department of Conservation-administered land, which is covered by five different statutes.

While not repeating National's ill-fated and seemingly sweeping proposal two years ago to open up prized conservation land to exploration, she instead talked of incremental changes" to legislation, including the RMA review, the extension of the RMA beyond the 12-mile limit to cover ocean floor mining, and the need to remove duplication of information required under numerous statutes.

The Ministry of Development would now be told a month before any public consultation took place on reclassification issues, in order for it to determine the interested parties.

Speaking on the Environmental Protection Authority and the importance of how RMA reforms must cover marine and coastal areas, she said National wanted to insure all aspects of environmental safety were in place.

In an overview of the New Zealand mining sector, Tony Haworth, of Campbell McPherson, said while there was a need to showcase the country's mineral potential, New Zealand had to be de-risked", with Government changes to policy and regulations.

We need to be more attractive to investors and be clear on what we stand for," Mr Haworth said.

Still high on everyone's agenda is the backlog of permits awaiting actioning by Government permitting agency New Zealand Petroleum & Minerals (formerly Crown Minerals), which has gone through months of restructuring and funding and staffing boosts.

NZPM director of minerals Josh Adams told delegates the agency had been left flat and stretched" as the sector grew in recent years and had a lack of commercial focus".

An off-the-cuff comment about an application "still sitting on a desk of NZPM" made by Newmont general manager of operations Glen Grindlay during his presentation on new prospects around Waihi, reflected the frustration of many companies queuing for applications.

Mr Adams said NZPM's focus was now firmly on dealing with the backlog, with applications running well above the 10-year average of 114. Closer to 200 were made last year, with 100 already made this year.

For this reason, Solid Energy would continue with its plans for a lignite to briquette plant at Mataura, coal seam gas studies in Huntly, and lignite to diesel and fertiliser conversion plans.

While environmentalists and the Green Party have been up in arms over the use of lignite, Mr Luff said carbon management was fundamental to all the developments and they would be carbon neutral, referring to requirements of the emissions trading scheme.

Solid Energy wanted to "lead and accelerate" the lignite-use debate, even if that included sticking out its neck" to do so, he said.

• Reporter Simon Hartley is a guest of AusIMM