Government legislation on what is allowed in New Zealand's exclusive economic zone is seriously flawed and betrays the spirit of public consultation, writes Greenpeace's Nathan Argent. 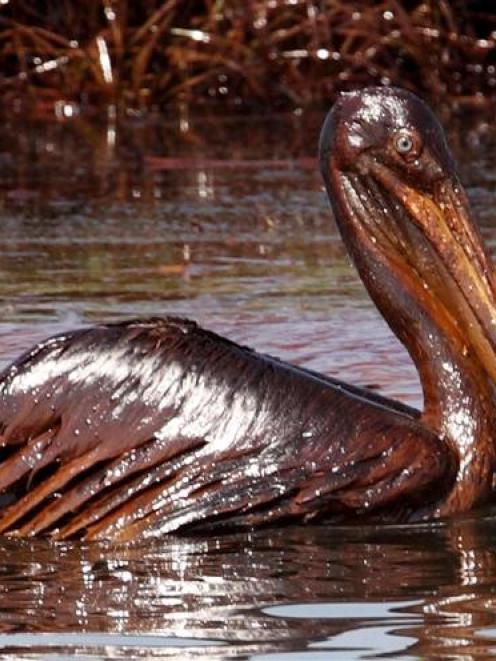 A pelican sits covered with oil from the Deepwater Horizon oil platform in the Gulf of Mexico. Oil escaped and spread after the platform exploded in April 2010. Photo by Jose Luis.
This week, the Government will end its consultation on the type of activities that should be permitted in our exclusive economic zone (EEZ), which include deep-sea oil and gas drilling. New Zealanders are being asked to make submissions on what type of activities should be permitted, discretionary or prohibited.

The prospect of deep-water drilling in our coastal waters is a highly controversial issue and the opportunity for the public to have its say is fundamental to the democratic process.

Yet before the consultation is due to close, and before Parliament has had the chance to fully debate and vote on the EEZ legislation, the Government has already released 23 deep-sea oil blocks for competitive tender. This betrays the good faith enshrined in the public consultation process and indicates that the Government has already made up its mind that deep-sea oil drilling should go ahead. This demonstrates a scant regard for the legitimate and well-founded concerns over the risks posed by such hazardous activities.

The Government contends it is confident that the recently established Environmental Protection Agency (EPA) and the forthcoming EEZ Bill will provide the necessary and adequate protection for our marine environment, while allowing our economy to grow. But this is nothing more than hollow rhetoric and political doublespeak.

The EPA, in its simplest form, is an administrative outfit offering technical advice and attending international forums. The goal of protecting the environment - which should be at the very heart of the EPA - has been omitted from its remit and instead the function of the authority is to facilitate environmental management, which is a completely different purpose.

Equally inadequate is the purpose of the EEZ Bill, which is explicitly designed in its current form to balance protecting the environment with economic development - a far cry from the need to develop our resources sustainably and with respect to intergenerational equity.

No amount of bloated rhetoric from the Government will alter the fact that the new legislation is heavily weighted in favour of economic development at the cost of environmental protection.

It will facilitate extractive activities and will not "protect and preserve" our pristine ocean environment - something we are legally bound to do under international law. High-impact and high-risk activities such as deep-sea drilling are more likely to be approved, bringing with them the spectre of a catastrophic oil spill.

The simple fact is that all aspects of oil development cause some amount of environmental impact and pose substantial environmental risk. And the greatest risk in deep-sea oil exploration is the loss of well control, or a "blowout".

Most well blowouts occur in the exploration phase of offshore oil drilling, which is perhaps the most dangerous phase in offshore drilling.

The clean-up costs are estimated to be $US40 billion ($NZ51 billion). A similar catastrophe here in New Zealand would be devastating to our economy and our global reputation.

Despite this, the Government has offered permits to drill exploratory wells at nearly twice the depth of the Deepwater Horizon - two of which are off the south coast of Wellington in the Pegasus Basin - with little regard for local communities and the environment.

Our EEZ extends 200 nautical miles from our coastline and is the fifth largest in the world. It is abundantly rich in biodiversity - home to some of the world's rare seabirds and a life support system for endangered marine mammals, including half the world's whale and dolphin species. It is an ecological treasure trove that this Government has a legal obligation under international law to safeguard and protect.

It is for this reason that Greenpeace believes all deep-sea oil drilling activities should be banned in our coastal waters. It is a view shared by more than 150,000 New Zealanders who have signed our petition opposing deep-sea drilling.

Instead, we are calling on the Government to take a more progressive and sustainable approach to strengthening our economy by embracing our clean energy and clean technology potential - a view that is shared by many business leaders and global institutions such as the World Bank and the United Nations.

Around the world, hundreds of billions of dollars are being invested in developing and deploying the cleaner, more efficient technologies that will help power our homes and businesses, while reducing our demands on our environment and our climate.

Greenpeace believes that environmental protection can deliver prosperity and social wellbeing. We are pragmatic in approach to our dependence on oil. We know that we cannot end our use overnight - indeed, oil is currently integral to everyday life - but with the increasing volatility of oil prices, the need to become more energy independent and the urgent need to reduce our emissions, we need a blueprint for a cleaner, smarter economy.

Rather than shying away from the opportunities that are presented by the global shift to a world without fossil fuels, New Zealand needs to recognise and embrace them. This means abandoning reckless plans for pushing into the deeper, more hazardous waters within our EEZ in search of the last drops of oil.