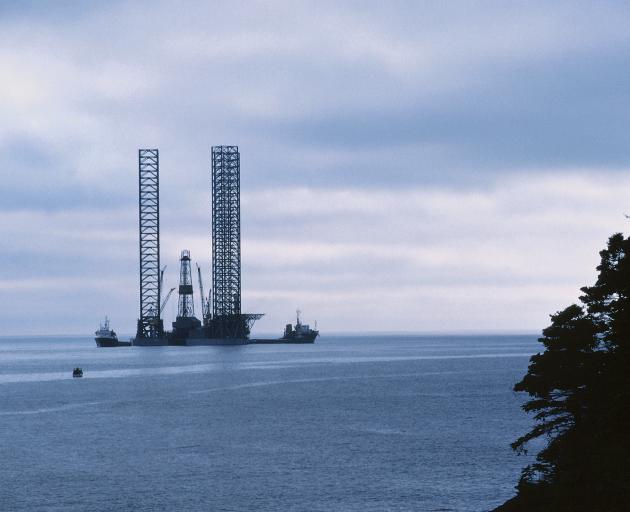 A small group of companies retain the right to explore for oil and gas off New Zealand's coastline because of existing permits. PHOTO: GETTY IMAGES
Has New Zealand forfeited its right to be called a climate leader? Amanda Larsson reports.

In a global political order overshadowed by Trumpist climate change denial, Ardern's decision to call time on the industry that bears the greatest responsibility for driving apocalyptic weather events around the world lit a beacon of hope.

Just 100 companies have caused more than 70% of the world's climate pollution over the past three decades. They include ExxonMobil, Shell, BP, Chevron, and Austrian oil company OMV, which after buying out the assets of Shell in New Zealand, has quickly become the most significant oil and gas player here. OMV is also one of a handful of companies that have controversially chosen to drill for oil in the pristine Arctic.

Bold leadership on the greatest challenge of our time has never been more needed. Last year, Ardern stepped up. She has been rightly lauded. Her name is synonymous with climate leadership all over the world.

And then, right on the eve of the first anniversary of New Zealand's historic oil and gas ban, OMV shamelessly announced a plan to drill in the deep seas off the wild Dunedin coast as soon as this summer.

If they find anything, it would not only put precious wildlife such as whales, sea lions, dolphins, and seabirds at risk of a Deepwater Horizon-scale oil spill, but it means they could be extracting and burning the stuff for decades to come - letting off a massive carbon bomb into our atmosphere.

OMV can do this because there was one big catch in the Government's oil and gas ban: it never revoked existing permits. This means OMV and a small group of other companies retain the right to explore for oil and gas in large tracts of New Zealand's waters for years to come.

Oil companies have known for an entire generation that burning fossil fuels like oil, gas, and coal is the major driver of climate change. In this knowledge, across a 40-year period, this industry has systematically and purposefully delayed action by spending billions of dollars on misinformation and political lobbying to deny the truth of climate change. All because it threatened their bottom line.

This greed has brought the world to the brink of catastrophe. Scientists are now saying we have just 10 years to make the changes required to avoid climate chaos. If we do not halve global carbon pollution over the next decade, we will be locked into warming that will be ruinous for all life on Earth.

In New Zealand, the symptoms of climate change, including extreme storms, flooding, drought, and fires, have already started to increase in frequency and strength. They have affected our coastal communities, our farming sector, critical infrastructure, native forests, endangered wildlife, health and food security.

Who can forget this summer's terrible fires in Nelson? Or the images of wild horses and ancient fish that perished in Australia's drought and heatwave, just weeks before half a million cattle were killed in the Queensland floods.

If oil companies such as OMV are permitted to continue their aggressive expansion into deeper and riskier territory, we do not have a hope in hell of protecting our health, homes, communities, food security, culture and livelihoods from the existential threat of climate change.

It did not have to be this way. The Great South Basin permit was due to expire last year. Inexplicably, the Government chose to grant OMV an extension at the ultimate moment.

As long as permit extensions like this continue, Ardern and her Government will forfeit their right to the claim of climate leadership. Any extension of an existing permit is essentially granting a new permit and is entirely inconsistent with climate action.

A government engaged in the latest scientific evidence on climate change would be going much further than banning offshore oil and gas. It would prohibit the development of any new fossil fuel infrastructure like gas peakers and coal boilers. It would have a strong plan to phase out the import of petrol and diesel vehicles, instead supporting the rollout of electric trains, buses, bikes and cars. It would be helping Taranaki's oil and gas workers re-skill for work in offshore wind and other complementary industries. And it would have an ambitious plan in place to solarise schools, public buildings and family homes.

One year ago today, New Zealand earned its rightful place as a leader on the most important issue of our time. But barely anything has happened since. And the choice to continue to extend oil and gas permits means our Government risks sliding back into complacency in the face of the greatest challenge humanity has ever faced.

- Amanda Larsson is a climate campaigner at Greenpeace New Zealand.

Isn't it great we can all emit as much carbon as we want, buy whatever we want in the shops (every item of which, uses oil to be produced and transported), then we can put ALL the blame on the oil companies that help us get us the things we buy.

It's not a Company concerned with unrest and disruption due to protest.

NZ police and taxpayers take care of that.