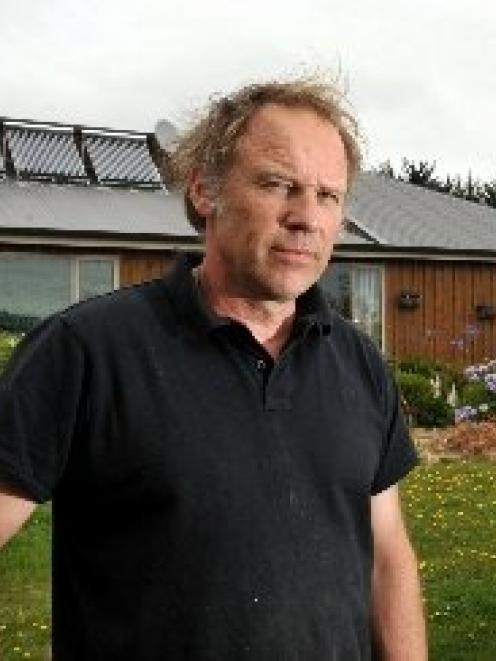 Hagen Bruggemann, of Dunedin, has given up power and gas bills but not the trappings of contemporary life. Photo by Craig Baxter.
The International Energy Agency estimates every $1 the world fails to invest in transitioning to renewable energy systems by 2023 will eventually cost us more than four times that, adding up to hundreds of billions of wasted dollars.

Time, then, to look to the future.

And as it turns out, the future is rugged, intelligent and speaks with a German accent.

He is living the alternative energy dream, complete with a solar and wind-powered electric vehicle that will soon double as an enormous house battery.

He mourns our collective hesitation in the face of what he says is an inevitable, risky, but liberating leap.

''This is the future. I don't know about New Zealand, but the rest of the world will go this way. There's no doubt about it,'' he says.

A step behind is Dr Janet Stephenson. The University of Otago energy researcher is shining a light on the path that leads to the river's edge, urging everyone to make the jump or at least don waders before the waters rise.

Dr Stephenson is director of the university's Centre for Sustainability, where her research includes future electricity and transport systems in a low-carbon New Zealand. 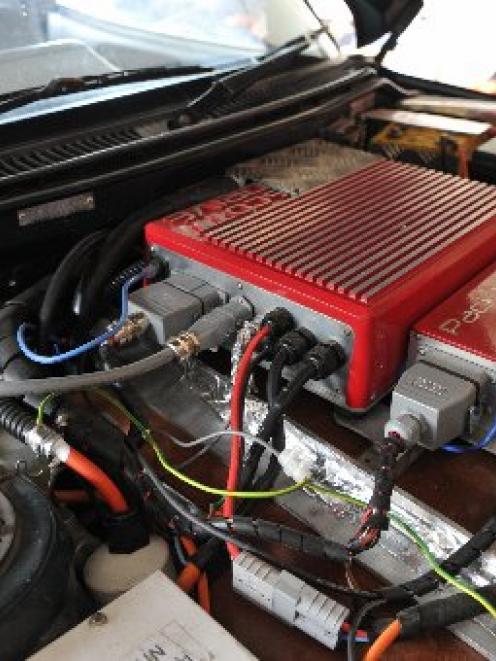 The electric engine under the bonnet of Hagen Bruggemann's converted car.
Transition has become a common term, even used by the oil and gas industry, she says.

But while industry representatives say it will take two or three hundred years, Dr Stephenson says we do not have that long.

''If we don't want to cook the planet, the evidence ... suggests there's a much much shorter window of opportunity,'' she says.

The planet will have to be nearly carbon neutral within 50 years, she estimates. It is an enormous change over a comparatively short period.

''Twenty-first century capitalism is entirely bound up in the existence of an incredibly cheap and reliable form of energy, which is fossil fuels.

Our lifestyles, our patterns of living, and our economies, are very largely dependent on that.

''To move away from that, many parts of many complex systems that lock us into place have to be changed ... a lot of jockeying around is going to have to occur for that transition to happen.''

People are fearful it will necessitate a significant drop in living standards. But research shows some countries that already have a higher living standard than New Zealand have lower carbon emissions, Dr Stephenson says.

And Mr Bruggemann is living proof, in our own backyard.

Raised in Germany, he emigrated to New Zealand in 1988. Married, and with grown children, he is the co-owner of an industrial refrigeration company and a practitioner of renewable energy living. 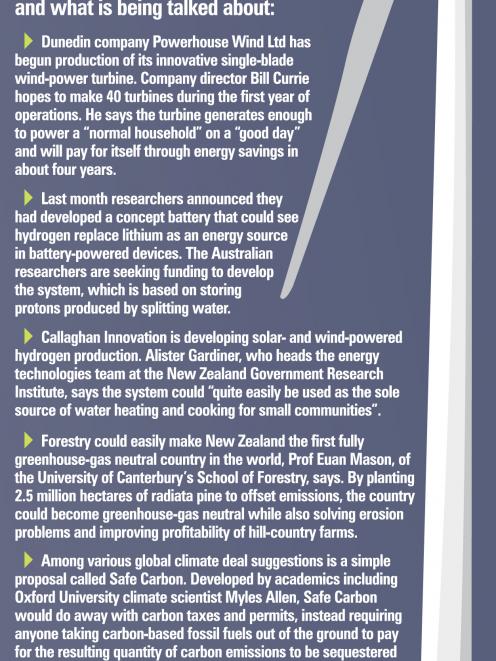 <a href="http://www.odt.co.nz/files/story/2014/02/powering_the_future_52fdc8e9a0.... target="_blank">Click HERE for full-size link</a>
His house on the north-facing slopes of Mt Cargill, above Waitati, north of Dunedin, was built eight years ago to a passive solar design.

He added low-carbon energy features as he could afford them: first solar water heating and a wetback woodburner. Then a wind turbine, followed by photovoltaic (PV) solar panels.

In mid-2011, he finished converting a petrol-engine Toyota RAV4 to an electric vehicle.

His life is typical in many ways: he drives home from work, takes groceries from the fridge, cooks on an electric stove, puts plates in the dishwasher, turns up the heatpump and switches on the television and laptop. But he hardly ever has a power bill and never has to buy petrol.

''There's no drop in lifestyle with renewables,'' Mr Bruggemann says.

''It's actually better because you have more energy available. If you size your plant right, you don't have to worry about using too much electricity because it is there anyway, it's free.''

Weaning New Zealand's transport system off fossil fuels is one of the biggest challenges the country faces in making the transition, Dr Stephenson says.

''We've been working with international experts looking at global trends in transport systems ... The role of electric vehicles (EVs) is emphasised again and again.''

All-electric cars are available in New Zealand for about $60,000.

But they are not making much headway here yet. Not compared with Norway - a country with a population and geography not dissimilar to New Zealand's - where government policies and incentives helped EVs top the new-car sales charts in October and November last year.

Mr Bruggemann built his EV for $20,000 using New Zealand componentry and his and others' know-how. The vehicle has clocked up 20,000km without missing a beat.

His latest innovative project is turning the vehicle into a giant battery capable of providing three days' power for his house. It will be a New Zealand first.

At present any surplus solar and wind power from his property is fed into the national grid. He is paid 25c per kilowatt hour (kWh) for the first 150kWh, but anything over that drops down to 10c/kWh. 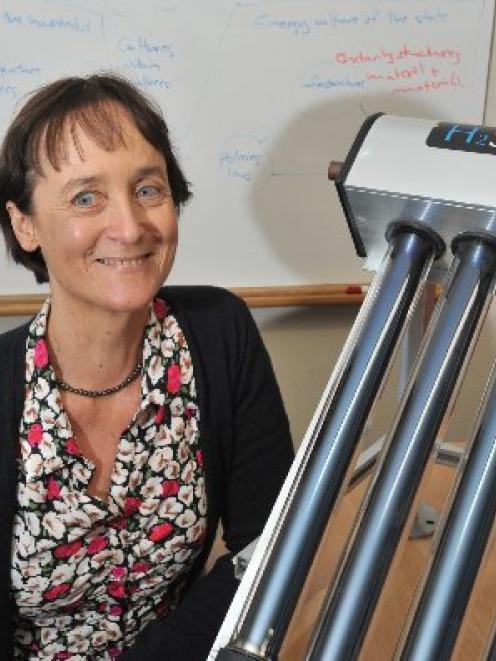 Dr Janet Stephenson, director of the Centre for Sustainability, University of Otago, says a change of mindset is needed to transition to existing fossil fuel alternatives. Photo by Gregor Richardson.
''So even though we produce a lot more power than we use, we are having to buy power [at times] at a more expensive rate than we are getting for what we produce,'' he says.

''But within half a year I think integrating the car with the house should be a pretty reliable way of storing a lot more energy and using it at night time and on days when we don't have much wind or sun.

''The power companies won't like it because you are using all your renewables first. But for the people, it is good.''

New Zealand, with its abundant supply of water, wind and sun, is extremely well-placed to transition from fossil fuel to renewables, Dr Stephenson says.

In the transport sector, for example, countries that rely on coal to generate most of their electricity would essentially be burning coal to power electric vehicles.

''But if [like New Zealand] you have 75%, or 90% [by 2025], of your electricity produced through renewable sources, then that's a much more renewable way of driving your car.''

How quickly and successfully the country moves to a low-carbon future will, in the end, be determined not so much by scientists making breakthroughs as people changing mind-sets.

''Ultimately, a lot of these transitions are to do with changing norms and changing behaviours,'' Dr Stephenson says.

''Many of the technologies we need to achieve transition already exist. The issue is how do we start adopting them into our lives?''

Globally, young people are already showing what that could look like in the area of transport.

During the past decade youth have been delaying getting a driver's licence, fewer have bought their own car, and when they did, they used it less frequently.

''We think we are starting to see this shift in New Zealand too.''

But if we do not voluntarily transition, we could be forced to jump.

Dr Stephenson says international experts have identified scenarios that have a high likelihood of occurring within 10 years and ''have a high potential to transform transport systems away from business as usual''.

Mr Bruggemann hopes all New Zealanders will be able to enjoy the benefits he is already reaping. But he suspects it will not be soon.

''We have a little bit of oil. But if you could make it [energy] all with wind and sun why wouldn't you?'', he asks.

''Imagine our economy if we didn't have to buy all that oil in. It would be a complete shift in our economy, because we would no longer be slaves to the oil companies.

''And it is possible now. The future is going to go that way. We'll just be a long way behind.''