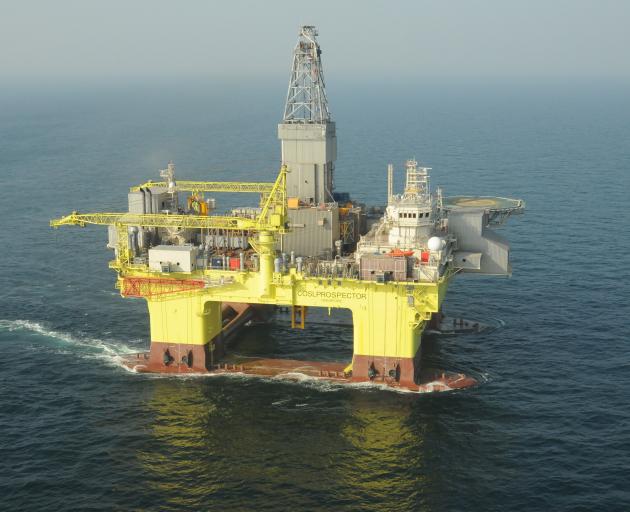 It is a year today since the coalition Government banned issuance of any new offshore oil and gas exploration permits.

At present there are 28 offshore oil and gas exploration permits around the country.

However, as oil companies have to make the regulatory decision to commit "to drill or drop" the permit, those relinquished will not be reissued by the current Government.

This week Austrian oil company OMV said it could potentially drill three test wells and seven appraisal wells in the GSB, southeast of Dunedin, on the proviso there were early signs of possible success.

Petroleum Exploration and Production Association of New Zealand chief executive Cameron Madgwick said in an interview yesterday he hoped the southern permits held by OMV, New Zealand Oil & Gas and Beach Energy were not seen as a "last gasp" for exploration.

"If OMV or NZOG (New Zealand Oil & Gas) were successful there would be flurry of activity if it turned out to be the North Sea of the South," he said.

"A gas find would be truly transformational for the region," he said.

Mr Madgwick was hopeful oil companies would form a "rig club", to share in the high cost of temporarily importing an oil rig or drill ship to New Zealand.

"That's typically been what has happened in New Zealand in the past," he said.

The self-propelled rig COSL Prospector will first be used in Taranaki by another company before OMV use it, potentially next year, in the Great South Basin.

"I'd be deeply surprised if a rig-club didn't occur ... if terms can be agreed," he said of availability, timing and cost proportions.

Minister of Energy and Resources Megan Woods has predicted there are several decades of drilling still available from the existing 28 permits, while the country transitions away from fossil fuels.

However, Mr Madgwick was less certain and believed Dr Woods was being "pretty optimistic", as four decades of drilling would imply a commercially viable find was then put into production.

"All the existing permits have drill or drop dates, to undertake certain work by certain times," he said.

Greenpeace and the Green Party have been scathing this week on the permit extensions recently afforded the existing permits of OMV and NZOG by the Government.

Mr Madgwick defended the extensions, saying the oil companies' applications and government decisions were working within "the normal operation of the law", under the Crown Minerals Act.

Just as a home-owner may be required to gain resource consents for work, the owner had the option to apply for changes or extensions in the future, he said.

He said in the assessment of marine consent applications by the Environmental Protection Authority (EPA) there was strict oversight and many rules and regulations before any drilling or production could begin.

"The EPA has an important role in assessing applications like this, including assessment of the plans and any material impacts activity might have."

Mr Madgwick said the Barque prospect, about 60km offshore from Oamaru, could be an economic "game changer" for the region - a study estimates royalties and taxes over the life of the field could be $32 billion.

"The study shows a commercial market for gas could result in industries like methanol, dairy and fertiliser plants establishing themselves around the Canterbury and Otago regions," he said.

NZOG have the permit, but have for more than two years been seeking a joint-venture partner, and must drill or drop the permit by April 2022; having just this week gained a three-year permit extension.

Alternatively, an option to bring the gas-to-shore could generate $450 million in annual GDP and $700 million a year in royalties and taxes.

"Taranaki's benefitted enormously from having a successful and sustainable energy industry over the last 50 years, and this study shows the same exciting potential for Canterbury and Otago," he said.

Replacing coal with gas has enormous benefits in terms of CO2 reduction.
It can also be used in a compressed form to power cars, reducing their emmissions.
I'm totally in support of gas, a transitional fuel.