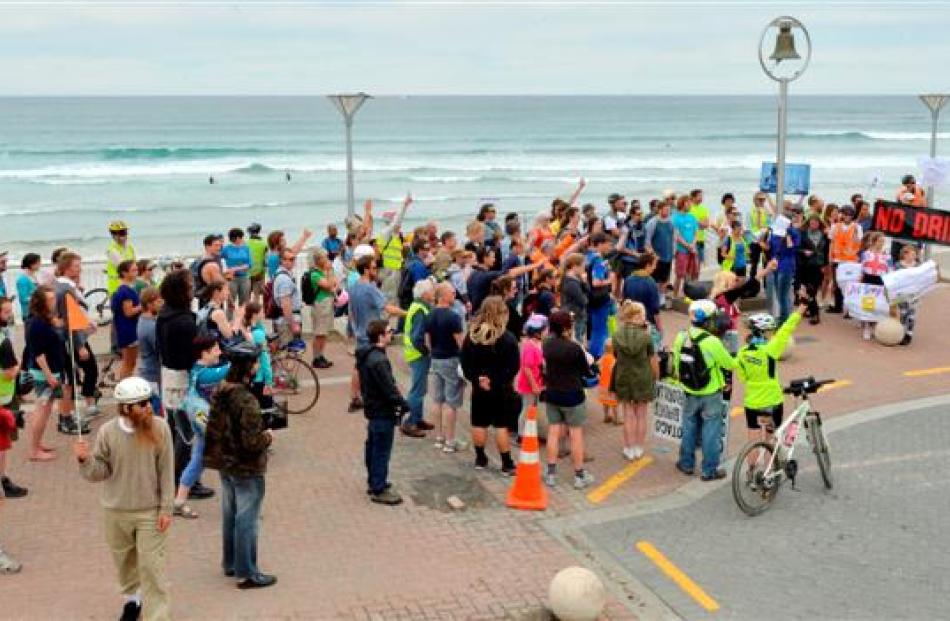 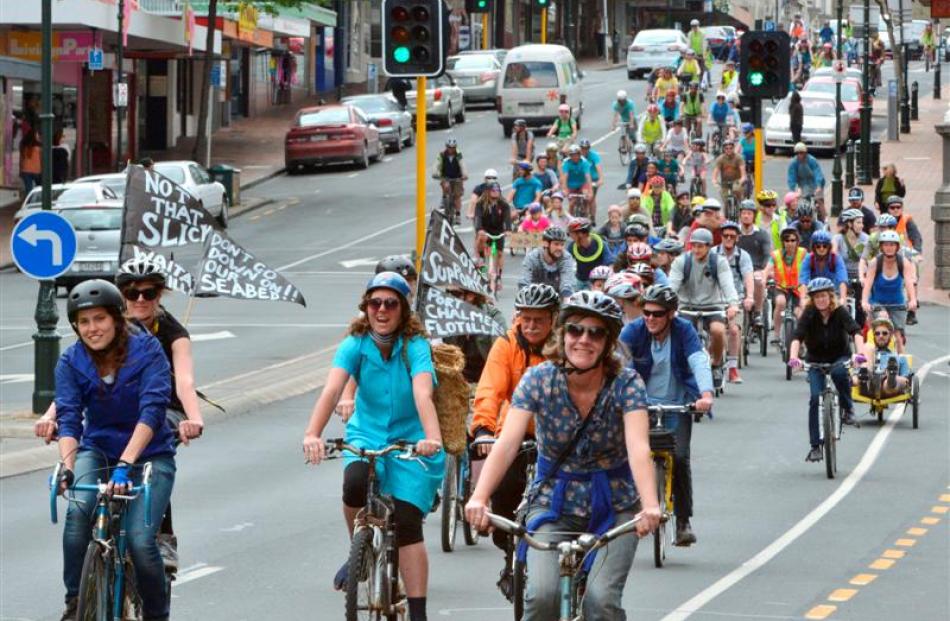 Drilling protesters cycle through the Exchange area in Dunedin yesterday.

Anadarko looks set to be greeted by a protest flotilla when the Texas-based oil giant starts drilling a test well in deep water off the Otago coast early next year.

The Oil Free Seas flotilla off the coast of Raglan in the North Island, which yesterday was facing drill ship Noble Bob Douglas, was expected to head south when Anadarko turned its attention to Otago.

It comes as analysis released yesterday by the Green Party claimed the risk of a spill in ultra-deep water - more than 1500m - was as high as one in 19 wells.

The Raglan drill site is more than 1500m deep.

The southern exploration site is about 60km off the coast of Otago Peninsula at the southern margin of the Canterbury Basin, at a depth of about 1100m.

Yesterday, an Oil Free Otago protest in Dunedin attracted up to 200 people on bikes in a ''flotilla on wheels'' that cycled from the Octagon to St Clair Beach.

Ms Penwarden said there was ''every chance of the flotilla coming down here''.

At present comprising six boats, it was likely to expand.

''Dunedin has its own boat that wants to be part of it; at least one, possibly three.''

Ms Penwarden expected the southern exploration to start in late January at the earliest.

She believed the protest flotilla had held up the North Island exploration schedule.

Opposition to deep-sea oil drilling was increasing, she said.

Taking part in the protest yesterday, Dunedin man Toby Bulow (30) said he would not describe himself as an activist but he wanted to raise public awareness of the threat to the environment and the economy.

Dylan Cazemier (21) did not believe the risk posed to drill equipment by the ''huge'' Otago swells was well understood. Don Wyatt (50), of Dunedin, was with his partner, Bridget, and their daughters Celia (11), Alice (8) and Venus (15). Celia, who attends Purakaunui School, said the ''whole school'' was against the drilling.

The Greens said yesterday the risk of a spill had been understated, a claim rejected by Petroleum Exploration and Production Association New Zealand chief executive David Robinson last night.

Green Party energy spokesman Gareth Hughes said the well Anadarko was about to drill off the coast of Raglan was at a depth of 1520m. This placed it in the ''ultra-deep'' category pinpointed in information from the United States Bureau of Safety and Environmental Enforcement as having a spill risk as high as one in 19 wells.

''Ultra-deep sea drilling ... is much riskier than the shallow-water oil drilling we have seen in Taranaki to date.

''In the Gulf of Mexico, one out of every 19 ultra-deep sea wells has had a spill,'' Mr Hughes said. Contacted for comment, Mr Robinson said he had not seen the information in question, but he rejected the claims.

Anadarko New Zealand manager Alan Seay, when contacted, rejected claims the North Island exploration had been delayed by the flotilla. Mr Seay said he was not concerned by the prospect of Anadarko's drill ship encountering the flotilla again when it arrived in the South.

''We absolutely respect people's right to protest. But we would ask in turn that they respect our right to carry on our lawful business. And also that they respect the [500m] safety zone that will be in place around that drill ship once it does arrive.''

Drilling is expected to start off Raglan as early as this morning, TV3 reported last night.