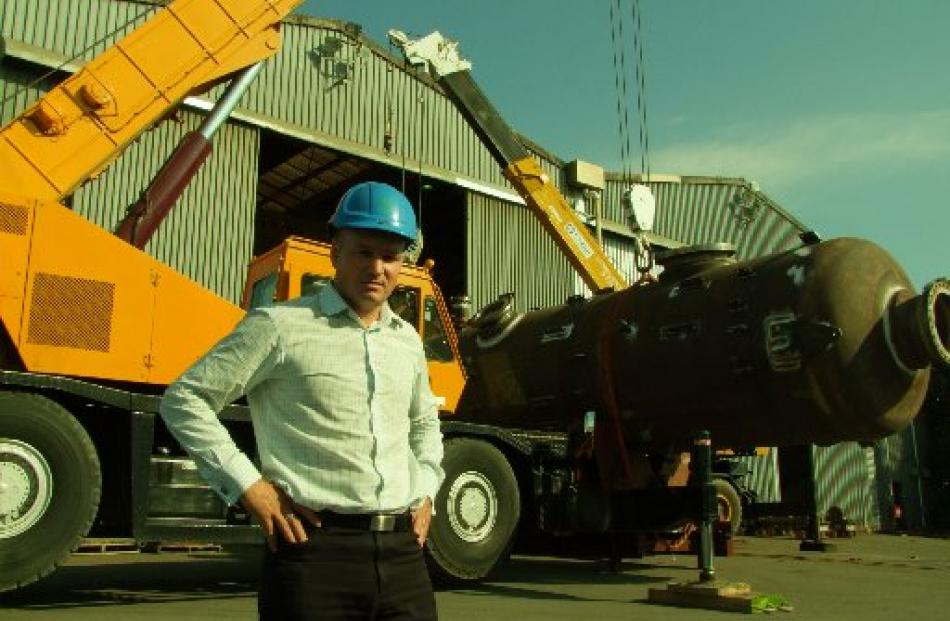 Business is booming in Taranaki, and much of the credit for the region's jobs and wealth is being given to the oil and gas industry. But, in quieter corners of the province, opponents are counting the cost. Chris Morris reports.

There is a story doing the rounds that the oil and gas industry takes without giving back, stripping wealth from a community while the jobs and money flow offshore.

Communities watch as their petroleum reserves disappear and they are left with only the threat of an environmental catastrophe on their doorstep, taking all of the risk and receiving none of the benefit.

It is a story that has been repeated more than once since the focus of the offshore search for petroleum shifted south to the deep water off Otago's coast.

But try telling that to Richard Ellis.

Mr Ellis, the managing director of Fitzroy Engineering, headquartered in New Plymouth, has a different story to tell.

He tells it as he watches a giant crane hoist a giant metal pressure vessel, stretching 16m and weighing 20 tonnes, and manoeuvre it out of the gaping door of a warehouse on a sprawling industrial site in New Plymouth.

The vessel being slowly swung on to a flatbed truck is bound for a New Zealand client working in the oil and gas industry, and is one of many manufactured by Fitzroy's workers in New Plymouth.

It is blue-collar work that has seen Fitzroy grow from 10 staff in the 1970s to about 400 workers today, he says.

''It's very fair to say that the oil and gas sector is the building block and the backbone of Fitzroy. There's no doubt about that.''

The company has branched out into other markets and sectors across New Zealand and overseas.

It launched Fitzroy Engineering Australia, employing another 75 staff and shipping products for the oil and gas, mining, pulp and paper and other industries to buyers across New Zealand and Australia.

Such was the company's success, it was purchased by Malaysian company Dialog in 2010.

All that meant jobs, wages and lives lived in Taranaki, rather than somewhere else, Mr Ellis said.

''It is all built on the skill sets we have gained from oil and gas,'' he said.

Mr Ellis is far from a lone voice in New Plymouth.

The Otago Daily Times walked the main street during a week-long visit to the city, and found businesses big and small prepared to talk up the industry's benefits.

While some - such as the owner of a linen and giftware store - said they were yet to see oil and gas money trickling into their tills, for others the industry provided anything from a small slice to a significant chunk of their revenue.

But it also included the optometrist selling bulk orders of safety glasses to the industry's companies, and the menswear store selling printed polo-shirts to companies marking major construction milestones with gifts for their staff.

''This oil thing has just been the icing on the cake to keep us buoyant through the tough times,'' Kingsway Menswear owner Paul Clarke said.

''We have got nothing but praise. We think it's brilliant for Taranaki, we're very lucky.''

As Venture Taranaki chief executive Stuart Trundle puts it, it is like a stone splashing into a pond, sending out ripples that benefit the wider economy.

The work of another Taranaki company, ITL Engineering, is a case in point.

ITL was formed in New Plymouth in 1988, and was contracted by big oil companies such as Shell to provide a range of design, planning, installation and other technical services, general manager Colin Fromont said.

ITL, in turn, relied on other Taranaki companies further downstream, to build many of the pieces of equipment it designed, he said.

And, when it came time to install them, more contractors were called in to help fit the pieces together, he said.

One example came when ITL was asked to help Ballance Agri-Nutrients recondition its giant urea-producing plant, which fed off Taranaki's Kapuni gas field, he said.

ITL staff spent a year helping plan the sequence of events that would unfold once the plant was temporarily deactivated, to ensure the operation ran as swiftly, efficiently and safely as possible, he said.

The company also designed replacement equipment and arranged for its construction, booking freight movements, painters and other key steps.

Once the switch was flicked, the plant shut down and about 200 tradesmen descended on the site for several weeks of frenetic work.

''That involved a lot of our people, a lot of their people and a lot of contractors from around the region,'' he said.

It was the kind of operation that had helped the company grow, pushing its workforce up from a handful of staff to 165 now, Mr Fromont said.

Most of that growth had come within the past five years, as the company's workforce doubled from 40 to 80 in two years, and then doubled again, to 165, in the past 2 years, he said.

That reflected increasing activity within the region's oil and gas sector, as well as the company's success in securing a greater market share, he said.

Success stories such as these are behind the forecasts of big economic benefits if natural gas is found anywhere in the South Island.

Analyst Berl has calculated a large offshore gas field could be worth $8.1 billion to the economy of any region hosting the industry, and $3.1 billion in regional GDP, while creating 11,540 jobs.

Venture Taranaki's Mr Trundle said the oil and gas industry was second only to dairy farming as the major driver of economic growth in Taranaki.

What had started as a service industry reliant on overseas expertise had matured over the years, and now consisted of a cluster of local companies employing thousands of Taranaki people, working within the region and exporting skills and products abroad, he said.

That had helped turn around many of the region's previously declining socio-economic indicators, and make Taranaki the country's top performing regional economy, he said.

New Plymouth Mayor Andrew Judd said the community had ''flourished and grown'' on the back of the industry and the jobs and wealth it created.

The community benefited in other ways too, including through oil companies' sponsorship of community facilities and events, including the Womad international music festival in New Plymouth, he said.

New Plymouth and Taranaki ratepayers also clipped the ticket through dividend payments from Port Taranaki and New Plymouth Airport, both of which were inflated by the oil and gas industry's use of the facilities, he said.

There was no doubt the industry also posed challenges, and a protest movement was alive and well in parts of Taranaki, although perhaps without the same heat as in Dunedin, where the debate was new, he said.

In Taranaki, those challenges ranged from environmental impacts and risks to the inflationary effect of the industry on house prices, and the noise, dust and disturbance caused by heavy vehicles rumbling down previously quiet rural roads.

Mr Judd said the council did its best to mitigate those effects through district plan rules, including restrictions on the roads to be used by the industry and the times of day they could travel on them.

However, the companies themselves also ''do their utmost'' to operate safely and protect the environment, he insisted.

''We don't always get it right, but where it's not working we work together as best we can to put it right,'' Mr Judd said.