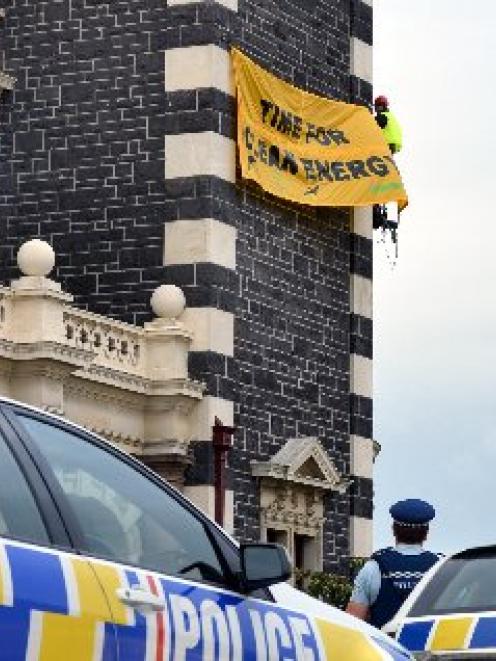 From about 8am-9am, cruise ship passengers and commuters were greeted by a banner - ''Time for clean energy'' - hanging from the station's clocktower, about 12m up.

Four police cars and six officers were at the railway station at one point.

After the climbers descended unaided about 9.30am, the two women and one man were taken to the central police station.

Senior Sergeant Brian Benn said the trio were given a pre-charge warning for being unlawfully on a building, and released.

While critical of their actions, Snr Sgt Benn said their only intent had been ''looking for a moment of media''.

''It's a farewell to [oil and gas explorer] Anadarko.

"It [the banner] is below the clock to give a timely message to the Government, that now the [exploration drilling ship] Noble Bob Douglas has left New Zealand, we all have to unite and stop deep sea drilling.''

The ship has spent a month drilling about 60km north of Dunedin and will leave soon for the Gulf of Mexico.

Drilling results are not expected for a year.