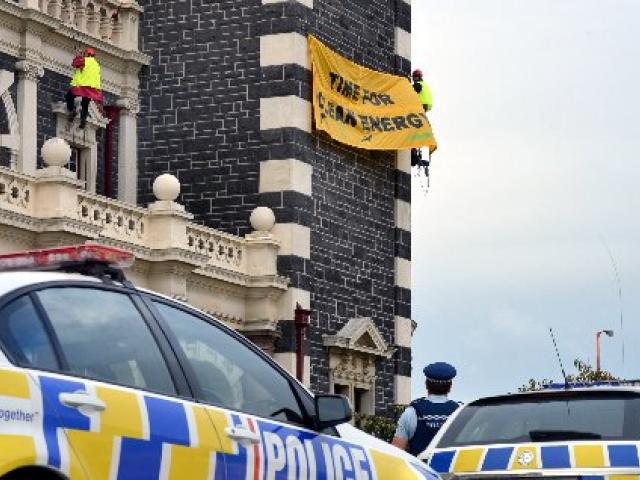 Three anti-oil protesters who scaled the Dunedin Railway Station yesterday morning and unfurled a banner were later given a pre-charge warning by police.

Italian fashion house Versace complied with European Union regulations on textile production, it said on Wednesday following allegations by environmental campaign group Greenpeace that it had found traces of harmful chemicals in the brand's children's clothing.

Two New Zealanders who spent two months in a Russian prison following a protest at an Arctic oil platform have returned home.

New Zealand environment activist Jonathan Beauchamp is in good spirits despite being denied bail by a Russian court.

''Oh, those Russians,'' narrates the voice as the 1978 Boney M hit Rasputin finishes.

Russian investigators say they have found drugs aboard a Greenpeace ship used in a protest against offshore Arctic drilling and would press new charges against some of the 30 people being held for alleged piracy.

Charges of piracy have been laid against 30 Greenpeace activists arrested by Russian authorities, including two New Zealanders.

A Russian court has ordered 14 Greenpeace activists and a photographer to be held in custody for two months pending further investigation over a protest against offshore Arctic oil drilling, drawing criticism from the environmental group.

A visit to Dunedin by Greenpeace's new Rainbow Warrior has been cancelled because the ship is too tall to fit under aerial cables across the harbour near Port Chalmers.
The new Rainbow Warrior is sailing towards Dunedin to campaign but a Dunedin city councillor says residents should decide on the future of deep-sea drilling in Otago.

Actor Lucy Lawless and seven other Greenpeace activists have pleaded guilty to a lesser charge over their occupation of an oil drilling ship in Port Taranaki in February.
Greenpeace's campaign to prevent deep-sea drilling for oil and gas exploration and extraction in New Zealand comes to Dunedin next week.

New Zealand is too slow in the race to realise its clean potential, Greenpeace International's executive director, Kumi Naidoo, says. South African-born Mr Naidoo has been visiting this country to support the campaign against deep-sea oil drilling.
Greenpeace New Zealand will appeal last week's High Court's decision which ruled its political activities means it cannot register as a charity.

The environmental protest movement has a mostly honourable history in this country and has earned the respect of a considerable number of citizens, but there have been occasions when protesters have chosen the wrong option to make their points.

Several swimmers forced the seismic survey vessel Orient Explorer off course during protest action yesterday against deep sea oil drilling off East Cape.
The idea of capturing carbon as coal is burnt is fairy talk, and a dangerous distraction from the urgent task of building a strong, future-proofed economy, writes Simon Boxer.
Police are speaking to two Greenpeace protesters after employees were forced to evacuate Fonterra's headquarters in Auckland over a bomb scare this morning.
Around 20 Greenpeace volunteers covered themselves in fake crude oil at Muriwai Beach, west of Auckland today.
Greenpeace is calling on the Government to stop companies catching orange roughy after two major international retailers stopped selling the fish over sustainability concerns.