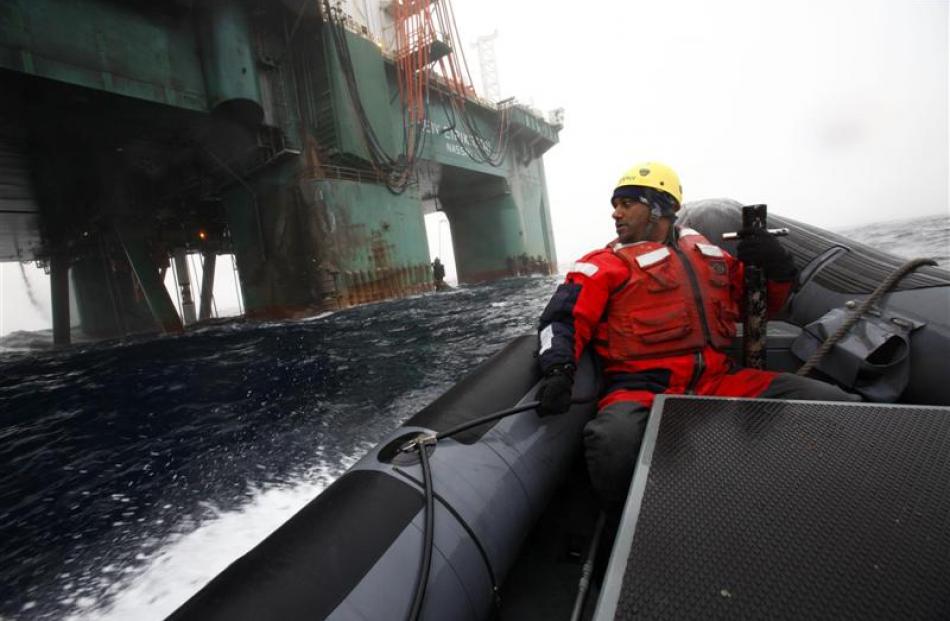 Greenpeace head Kumi Naidoo prepares to do battle last month in a Greenpeace oil protest in the Arctic. Photo by Greenpeace.

New Zealand is too slow in the race to realise its clean potential, Greenpeace International's executive director, Kumi Naidoo, says. South African-born Mr Naidoo has been visiting this country to support the campaign against deep-sea oil drilling.

Last month, I spent five days in an Arctic prison in Nuuk, Greenland, a frozen outpost on the country's western coast.

I was there because I had climbed on to a deep-sea oil rig to deliver a 50,000-signature petition to the rig's master, demanding that he cease operations.

To get to the drilling deck, I had climbed one of the rig's legs, as ice-cold sea water was hosed on me from above. I have only just got over the cold I caught as a result.

New Zealand and Greenland couldn't be much further apart. I know this in part because, since being released from prison, I have made the long trip "down under".

But like Greenland, New Zealand is faced with the same threats.

As the easy-to-reach oil is running out, the oil industry is opening up its final frontiers, all over the globe. That's why, as the effects of climate change are causing the Arctic ice cap to retreat further and further every year, companies like Cairn Energy, which had contracted the rig I climbed aboard, are poised to move in.

That is also why Anadarko, a 25% shareholder in the Gulf of Mexico's doomed Deepwater Horizon exploratory rig, is planning with its partners to start drilling deep-sea wells off Taranaki, and Canterbury, this summer.

During my visit to New Zealand last week, I was reminded of what this country is famous for - its natural beauty. Your potential as a tourist destination speaks for itself. I know how your clean green reputation sells the products I see on the shelves of my local supermarket.

All this could be devastated by a major oil spill, like the one we saw last year in the Gulf of Mexico. Some of the water in the Carrack and Caravel prospects, off the Canterbury coast, is 1200m deep - but divers can only descend as far as 200m to fix a problem with a wellhead on the sea floor.

Like Greenland (and the rest of the globe), New Zealand is also under threat from climate change. As a country that depends so much on agriculture, New Zealand is extremely vulnerable to the "one-in-a-hundred-year" extreme weather events that are becoming commonplace, and which we know to expect more of as we get closer to the point of triggering a state of runaway climate change.

The exploitation of what I call "extreme" sources of energy - such as deep-sea oil, tar sands and lignite coal (the dirtiest type of coal there is, in terms of emissions) will make protecting our planet, and saving ourselves, even harder.

But while the threat that comes from the deep-sea oil industry is spreading around the globe, there is another positive force for change that's starting to take hold in a big way: an appreciation for the barely tapped potential - as an energy source but also as a lucrative potential market - of clean energy.

China will spend $US738 billion ($NZ873 billion) on clean energy development by the end of this decade. South Korea will have spent $US85 billion on cleantech projects during the four years up to 2013. Last year, investors around the world sank $US211 billion into renewables.

With New Zealand's famed ability to engineer the answers to practical challenges, and with the work that has already been done by local clean energy companies, this country is well placed to compete in the global clean-energy race. Entering that competition would provide the sort of sustainable economics that the 19th century's energy sources don't, given that we now know just what a threat carbon poses to us all.

Right now is the perfect time for the Government here in New Zealand to take advantage of the clean-energy opportunities you have, rather than subsidising the type of energy options that will badly affect us all, regardless of where we live.

New Zealand, along with the rest of the world, must confront its share of the globe's challenges and embrace its share of opportunities. The extraction of fossil fuels cannot be "balanced" against something as tremendous as climate change, and action, whether climbing an oil rig, writing a letter, cancelling fossil fuels subsidies, going on a protest march or investing in a wind farm, is needed urgently by us all.