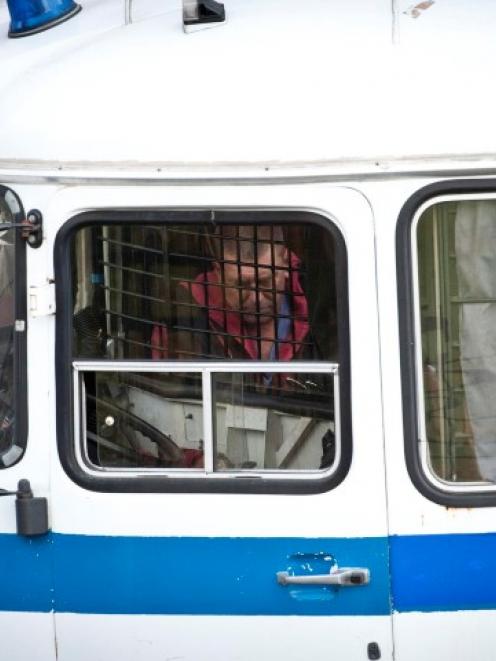 New Zealander Jonathan Beauchamp leaves the Leninsky District Court of Murmansk, after being charged with piracy. REUTERS/Dmitri Sharomov/Greenpeace
Charges of piracy have been laid against 30 Greenpeace activists arrested by Russian authorities, including two New Zealanders.

All crew members of the Arctic Sunrise ship, which was seized in international waters last month during a protest over drilling for oil in the Arctic, now face up to 15 years in prison if convicted.

Kiwi activists Jonathan Beauchamp and David Haussmann are among those facing jail.

Lawyers for the environment group have lodged formal appeals in the Murmansk Lenin district court against the continued detention of the crew members, who have been dubbed 'the Arctic 30'.

A world-wide day of protest has been organised for tomorrow against the "profound injustice" of the charges, with Greenpeace calling for people to "fight against bullies".

Supporters of the activists will gather outside the Russian Embassy in Karori, Wellington, from midday on Saturday, in a picket which will also feature speeches from families of the two Kiwis held by Russian police.

The mother of Mr Beauchamp, Mary Beauchamp, said the charges laid against her son "seem excessive".

"Peaceful protest is one thing, but he would never condone violence or hurtful actions in order to get the message out about the dangers of drilling for oil in such a fragile place," she said, adding she hoped the Russian authorities would reconsider.

Greenpeace international executive director Kumi Naidoo said its activists had been "accused of an imaginary offence", and branded it a "profound injustice".

"There can be no doubt about why the charge of piracy has been brought and the legal hammer wielded," he said.

"An effort is underway to intimidate us, but our peaceful passionate campaign against Gazprom and all other Arctic drillers will not be silenced."

He called on people across the world "to stand with us" against Gazprom and all oil companies who want to drill in the Arctic.

Peaceful protests have been planned for more than 80 cities in 45 countries tomorrow, including a human banner on Hong Kong's harbour, pickets at former Apartheid detention centres in South Africa, and a replica Arctic Sunrise unveiling in Madrid.

It follows a week of attempts to highlight the plight of the prisoners to the global media, which saw a huge banner unfurled at a UEFA Champions League football match sponsored by Gazprom in Switzerland, and pickets outside all of Gazprom's filling stations in Germany.

Meanwhile, Interfax News reports that Mikhail Fedotov, the head of the Russian presidential Human Rights Council, said he sees no reason to prosecute the crew of the Arctic Sunrise for piracy. He represents the council which advises Russian president Vladimir Putin on human rights issues.

The 28 Greenpeace activists, a freelance photographer and a freelance videographer, were arrested following a protest against a Gazprom Arctic drilling platform, in which two people tried to climb onto the platform and hang a banner.