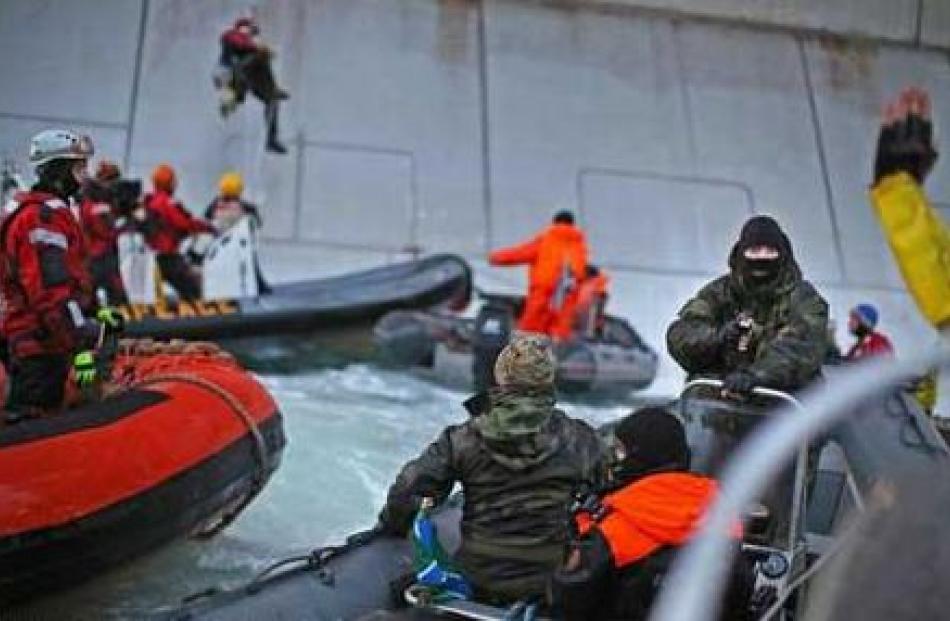 A Russian Coast guard officer is seen pointing a gun at a Greenpeace International activist as five activists attempt to climb the Prirazlomnaya.

A Russian court has ordered 14 Greenpeace activists and a photographer to be held in custody for two months pending further investigation over a protest against offshore Arctic oil drilling, drawing criticism from the environmental group.

The 15 detainees, who had been among 30 people aboard a Greenpeace ship used to stage the protest at the Prirazlomnaya oil platform, were denied bail by judges in the northern city of Murmansk, Greenpeace and Russian media said.

Seven others were ordered held for three days, and eight were still awaiting hearings late on Thursday evening.

All 30 were detained last week aboard the icebreaker Arctic Sunrise, which was seized by Russian coast guards after two activists tried to scale the Barents Sea oil rig owned by state-controlled Gazprom on Sept. 18.

"We are deeply concerned by the decision of the judge to refuse bail," Greenpeace Executive Director John Sauven said.

The federal Investigative Committee has termed the protest an attack and opened a criminal case on suspicion of piracy, which is punishable by up to 15 years in jail. The activists have not been charged.

President Vladimir Putin said on Thursday that the activists from 18 countries were clearly not pirates but had broken international law, suggesting they might end up facing less severe charges.

The spokesman for the Investigative Committee said on Thursday that activists ordered held for two months might be released on bail before that period ends if their role is found to have been minor, the Interfax news agency reported.

Greenpeace has said it was the Russian law enforcement authorities who broke the law by boarding the Arctic Sunrise, and denied the piracy allegations, saying its activists had conducted a peaceful protest.

"The Russian authorities are trying to scare people who stand up to the oil industry in the Arctic, but this blatant intimidation will not succeed," Greenpeace International executive director Kumi Naidoo said in a statement.

Nils Muiznieks, human rights commissioner for the Council of Europe, told Reuters the denial of bail "clearly raises human rights concerns", saying pre-trial detention should be used only in exceptional circumstances when there is no alternative.

He urged Russia, a council member, to abide by standards for protecting the right to free expression and peaceful assembly.

In Bulgaria, police arrested six Greenpeace activists who blocked a Gazprom gas station to protest its Arctic drilling plans. Four of them had chained themselves to fuel pumps and waved banners that read: "Stop Gazprom, Save the Arctic" and "Gazprom = Arctic destruction".

The Prirazlomnaya rig - a crucial part of Russia's effort to tap oil and gas in the Arctic - is slated to start operating by the end of the year and is expected to reach peak production of 6 million tonnes per year (120,000 barrels per day) in 2019.

Denis Sinyakov, a photographer who was denied bail, said he had covered the protest as a journalist, Greenpeace said.

The advocacy group Reporters Without Borders said Sinyakov's detention was an "unacceptable violation of freedom of information," and dozens of journalists and activists protested outside the Investigative Committee headquarters in Moscow.