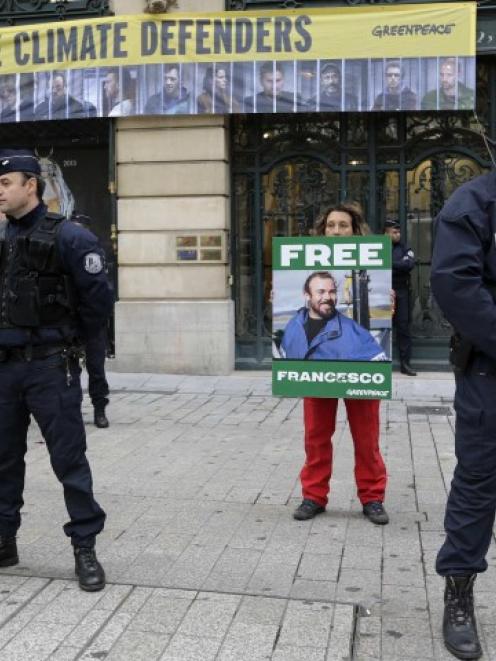 Police secure the area as Greenpeace activists protest in front of Gazprom headquarters in Paris. The protest is against Gazprom's plans to drill for oil in the Arctic, and also to demand the release of the 28 Greenpeace activists and two journalists detained in Russia. REUTERS/Jacky Naegelen
Russian investigators say they have found drugs aboard a Greenpeace ship used in a protest against offshore Arctic drilling and would press new charges against some of the 30 people being held for alleged piracy.

Greenpeace Russia mocked the accusation. "The Investigative Committee 'found' narcotics. We are waiting for it to find an atomic bomb and a striped elephant," it said on Twitter. "This is possible in Russia these days and can hardly surprise anybody."

In addition to drugs, the Investigative Committee said searches of the Arctic Sunrise, which was boarded by Russian coast guards after the Sept. 18 protest at the Prirazlomnaya oil rig, had revealed equipment with potential military uses.

It also said investigators were trying to establish which of those being held were responsible for what it called attempts to ram coast guard boats, endangering the lives of their crew.

"In view of the data obtained while investigating the criminal case, charges ... are expected to be adjusted," the committee said. It said that "a number of detainees will be presented with charges of committing other grave crimes."

Russia arrested the 28 activists and two freelance journalists who were aboard the Dutch-registered Greenpeace vessel during the protest and has charged all of them with piracy, which is punishable by up to 15 years in prison.

The Investigative Committee said morphine and poppy straw, a ingredient for heroin and opiates, were found on the ship.

Greenpeace lawyer Alexander Mukhortov said that the vessel's American captain legally kept morphine in his safe for medical purposes and that the equipment cited by investigators was a sonar widely used for maritime expeditions.

The environmentalist group says the piracy charges are absurd and unfounded and that the conditions of detention for the detainees, who come for 18 countries, have in some cases violated their civil rights.

Kumi Naidoo, the head of Greenpeace, offered in a letter to Russian President Vladimir Putin to move to Russia and stand as security for the release on bail of the detainees.

A Murmansk court refused to bail four Russians among those under arrest and appeals hearings against pre-trial detention of the 26 other detainees are due this week and next.

Putin has said the activists were clearly not pirates but that their protest did violate the law.

The group's lawyers say the charges might have been initially brought to justify forcibly boarding and seizing control of the ship and towing it to Murmansk.

The case has already upset Moscow's international ties, with the Netherlands launching legal proceedings against Russia, saying it had unlawfully detained the activists and others on the Dutch-registered icebreaker Arctic Sunrise.

Naidoo was among Greenpeace activists who scaled the same platform, owned by the state giant Gazprom and at the heart of Russia's drive to tap the Arctic's energy resources, last year and got away with it.

The harsher treatment this time around is widely seen as an attempt to scare off any future protests and give a clear signal that Russia is not willing to tolerate such actions.