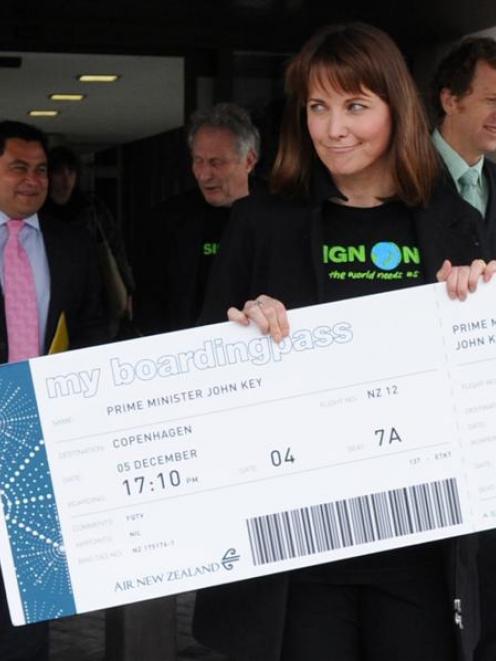 Representing Greenpeace, the actress and climate scientist were responding to Mr Key's decision not to attend an international climate change meeting in Copenhagen, Denmark, next month.

They arrived at Parliament with flowers, an over-sized boarding pass and a cheque for $4781, raised from sausage sizzles and cake stalls, to put towards the Prime Minister's air fare.

They waited, along with gathered media, while a Beehive staffer phoned Mr Key's office to say he had visitors, only to be told the Prime Minister was otherwise engaged.

After another attempt was made to see Mr Key -- and declined, along with the cheque -- the pair had to make do with leaving the flowers and boarding pass with security staff.

"He's a man, he can change his mind," said a hopeful Lawless.

Mr Key argued yesterday it was clear no binding treaty would be signed in Copenhagen -- despite earlier talk of an international resolution being on the cards -- and that Environment Minister Nick Smith would be New Zealand's representative there.

Lawless and Dr Salinger said progress would only be made towards reducing greenhouse gas emissions on an international scale if heads of state made it happen.

Sending bureaucrats or people representing heads of state was a cop-out.

Mr Key later said he had not been given warning about the visit, and shrugged off questions about why he didn't meet the pair.

"I was probably out getting lunch or something."

Dr Salinger said the unspent $4781 was likely to be referred back to Greenpeace for it to put towards its campaign to raise New Zealand's greenhouse emissions target.