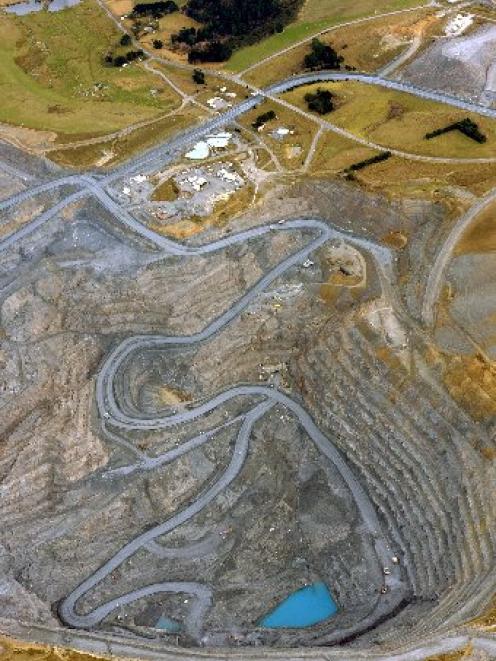 However, Oceana's decline pales in magnitude against that of Newcrest. Its shares had hit a year-high of $A29.97 before falling to a year low of $A11.40.

Yesterday, Newcrest was trading around $A11.66.

Newcrest's share value had been slashed 51.6% during the past year, or $A9 billion, and was valued at $A8.84 billion yesterday, Craigs Investment Partners broker Peter McIntyre said.

''There's been a complete loss in investor confidence with Newcrest. It was once the shining light of the [resource] sector,'' Mr McIntyre said.

With resource investors likely to be holding stock in a number of companies, Oceana's decline was more of a ''follow the leader'' decline.

''There's nothing specific driving Oceana's price [down]. Newcrest have numerous issues to contend with,'' he said.

Newcrest's cost of production had ''blown out'' to beyond $A1000 an ounce and following its $A10 billion takeover of rival Lihir Gold in 2010, Newcrest was having to write down about $A3.6 billion on that asset, Mr McIntyre said.

However, Newcrest's woes are wider. The Lihir writedown is part of a bigger $A6 billion asset writedown the company announced on Friday, along with closing its Brisbane office.

AAP yesterday reported Newcrest had come out swinging against allegations it breached market rules and tipped off analysts ahead of last week's massive downgrades.

Investment banks including UBS, Citi and Credit Suisse downgraded their investment views on Newcrest last week, citing massive profit and production cuts which led to a plummeting share price before the $A6 billion writedown announcement.

The magnitude of the writedown had shocked most people.

CMC Markets chief market strategist Michael McCarthy said that amount was staggering and represented all the company's earnings since 2000, meaning Newcrest was ''in big trouble''.

He said the company should have protected profits by hedging and locking in gold sales when prices were at record levels, through put options and forward sales as insurance.

Mr McIntyre noted all major gold producers had moved away from hedging contracts when the gold price kept rising on the daily global spot market.

Mr McCarthy said Newcrest's cash costs were officially below $1000 an ounce of gold but actual production costs are estimated to be well above that, including royalties, exploration and a range of other expenses.

This year, Oceana's production cash costs have been estimated at between $US650 and $US800 ($NZ801 and $NZ986) an ounce, which includes credits, offsetting production costs, from mining and selling copper, the latter from its newly commissioned mine in the northern island Luzon, in the Philippines.