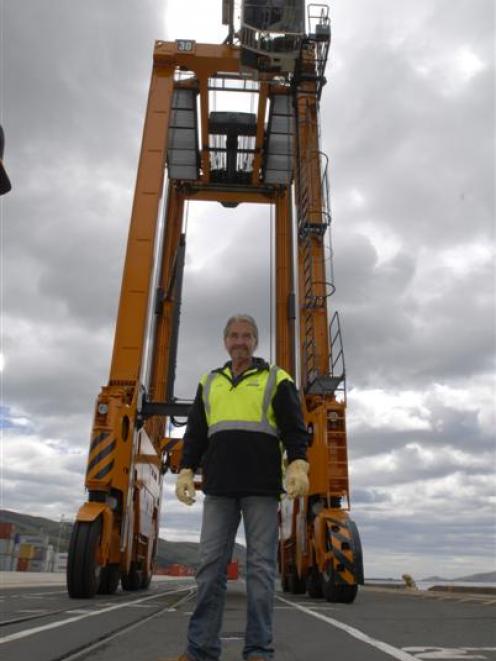 Port Otago cargo handler Harry Harrington is dwarfed by a 14m-tall Kalmar straddle crane recently commissioned at the port. Photo by Gregor Richardson.
Two Finnish-made Kalmar straddle cranes have been fully commissioned at Port Otago during the past month - part of a total $8.5 million the southern port has set aside this year for capital expenditure.

During the past period of more than a decade, the 100% Otago Regional Council-owned Port Otago has spent more than $70 million in infrastructure and maintenance, but is at an end to its present 30-year plan and will ease back capital expenditure to $3 million or less next year, Port Otago chief executive Geoff Plunket said yesterday.

"We have worked our way through a 30-year upgrade, including two new cranes, [total $21 million] electrical reticulation, a tug [$7 million] and increased the number of reefer (refrigerated) plugs. We're very pleased with the quality of assets," Mr Plunket said.

The two new Kalmars stand 14m tall, 3m higher than their 14 predecessors still in use at the port, and can carry laden containers stacked more than three high.

This ability will boost container storage capacity by 25% in some areas, general manager of operations Ron Horner said.

"Previously we could only take containers from the ends [three high] but now we can access the entire stack."

The Kalmars were delivered in late November, assembled by Finnish technicians and formally commissioned on Christmas Eve.

Driver training is under way.

Mr Horner said two older Kalmars would be relocated to Fonterra's site near Mosgiel this year, and the balance at Port Otago of 14 straddles would be maintained, with the new taller straddles eventually replacing the entire fleet.

Following last year's handling of a record 218,000 containers, Port Otago is expecting a downturn of 45,000 containers worth $4 million, prompting some restructuring and about 25 job losses.

Port Otago chairman John Gilks, while delivering dividends of $6.9 million, $9.4 million and $6.9 million during the past three financial years to the ORC, has repeatedly cautioned about having to deal with the downturn and recession.

Mr Plunket said Port Otago had deferred dismantling of its already decommissioned 31-year-old fourth crane, from February, to a quieter period in the year, between July to November, to suit the contractor's availability.

"There's not enough space at present and it's now a high priority to see that go," he said.

Mr Plunket said Port Otago was not considering ordering a third new replacement crane from the Shanghai yards in China, but an upgrade of the existing third crane was being considered.

On the question of Port Otago's proposal to deepen and widen channels in the harbour, the company will be releasing documents for public consultation in early-February, before submitting resource consent applications.

On the expectation the current 285m-long container ships carrying 4100 containers, will be replaced by 320m-long ships carrying 6000 containers, Port Otago wants to deepen the channel to Port Chalmers and extend wharves and berths - anecdotally estimated to cost "tens of millions" of dollars.