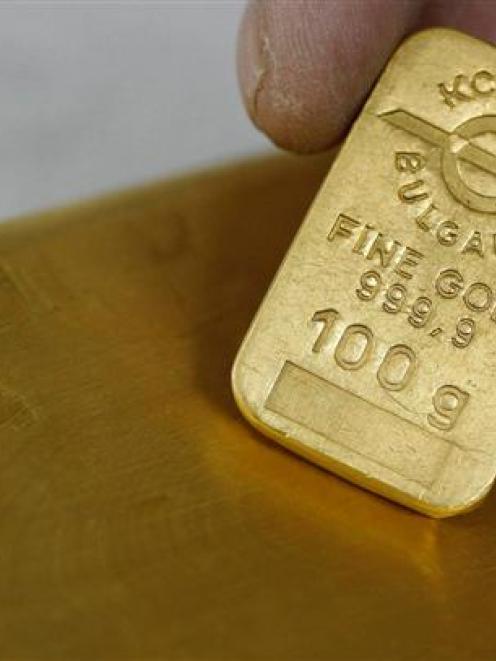 Global spot gold prices, around $US1600 ($NZ2028) yesterday, have declined more than 10% in recent weeks; pictured is a 100g fine gold plate produced in Bulgaria. Photo by Reuters.
Shares in East Otago-based Oceana Gold received a welcome new year boost yesterday, rising during the trading session with a 9% gain to reach $3 per share; albeit on low trading volumes.

Fluctuating global spot gold prices, down from $US1800 per ounce in recent weeks to around $US1600 ($NZ2028) an ounce yesterday, were reflected in Oceana's share price which dropped by 20%, from $3.38 in mid-December to $2.68 at the end of the month, before beginning to retrace the losses.

Oceana Gold has not been alone in its share decline, with most major producers taking a hit as investors shied away from the traditional safe haven of gold in times of turmoil, and instead repatriated funds home, which has seen a surge towards the safety of US Treasury bonds.

In mid-June, 22-year-old Oceana announced its overall New Zealand operations were expected to be extended by seven to eight years into 2018-19, and then sought the granting of ongoing resource consents at Macraes to continue its mining operations.

However, Oceana is appealing recent Environment Court-imposed conditions involving provision of a $2 million trust fund for the local community and an earlier proposal to maintain a heritage art park once mining at the East Otago site is finished.

This calendar year, Oceana's forecast production is down slightly to 255,000-270,000 ounces, but combined with its development gold and copper mine at Didipio in the northern Philippines; due to go into production by the end of the year, Oceana is targeting annual gold production of 600,000 ounces by 2016.