Port Chalmers' Italian connection about to be strengthened 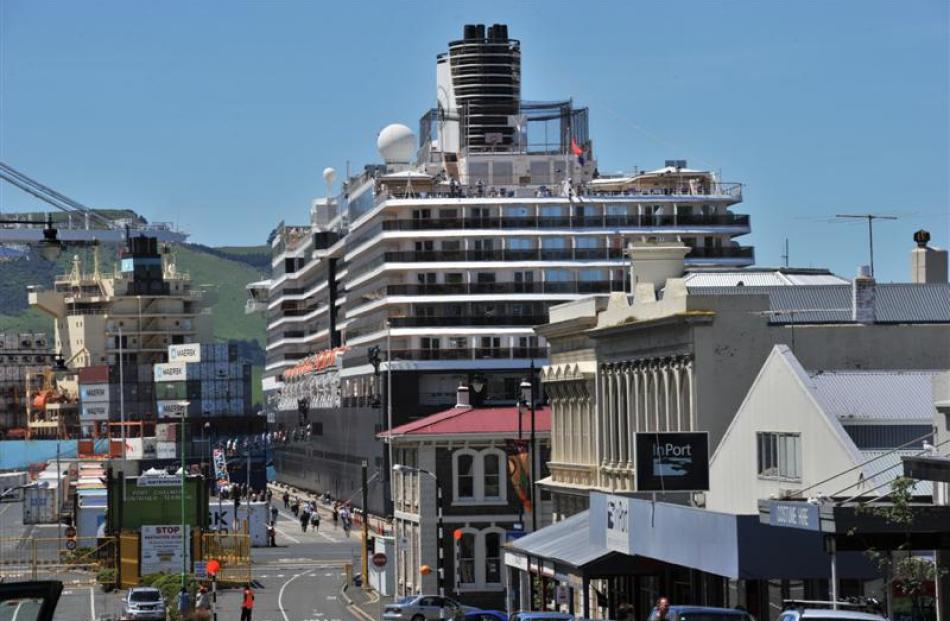 The largest cruise ship operator in the world, the Carnival group, has been well-represented here, with a ship in port each day since last Wednesday.

The sister ships Dawn Princess, Sea Princess and Sun Princess were followed by the larger Diamond Princess, all from the Princess Cruises fleet. And yesterday, the Holland America Lines Oosterdam returned on its third visit.

However, on Thursday, another member of the group, Costa Crociere SpA (the Costa Cruise Line), of Genoa, will make its debut here with the arrival of Costa neo Romantica.

With the exception of the Japanese-built Diamond Princess, the other vessels mentioned were all built in Italy by the state-owned Fincantieri shipyards. This week's 220.52m long newcomer entered service in September, 1993, and was built in Venice. It was designed to carry 1782 passengers in 678 cabins and operate at 20 knots. Four eight-cylinder Sulzer diesels with a total output of 48,944hp have slip couplings and single gearing to two propeller shafts.

The ship served as Costa Romantica until November, 2011. It was taken out of service to undergo a 90 million ($NZ144 million) refurbishment by the San Giorgio del Porto yard, at Genoa. At the same time two new half decks were added to the vessel and these increased the gross tonnage from 53,049gt to 56,769gt. The ship was renamed Costa neo Romantica before returning to service last March.

In 1997, the Costa Crociere was bought by the American firm Carnival Corporation and the English company Airtours. Each held a 50% stake in Costa and this increased the investment capacity of the Genoese company while maintaining its identity as an Italian one. Carnival purchased the Airtours shares in September, 2000.

Today, Costa has 14 ships in service. It also controls the nine ships operating under the German AIDA Cruises brand, plus three employed by Iberocruceros, which caters for the Portuguese and Spanish speaking markets.

While people today might associate the Costa name only with cruising, it has been around for nearly 160 years. It started off in 1854 under the name of the founder, Giacomo Costa fu Andrea, who started out trading fabrics and olive oil between the markets of Genoa and Sardinia.

The company later expanded services to other areas and later became more widely known as Linea C. And in the 1930s the tradition of naming ships after family members was instituted.

In 1948, the company inaugurated commercial services to North America; then five years later extended them to South American routes.

Four years later it turned its attention to passenger vessels, which it introduced to the South American run. The company added new ships to this service over the years.

Eventually the family ''C'' names disappeared in favour of the Costa prefix, adopted when the company made the decision to become a full-time cruise ship operator.

Today the Costa fleet is made up of vessels built between 1991 and this year.

They also have one on order for completion in 2014, a 132,500gt vessel that will be the largest ordered for the line. These modern vessels are indeed an interesting contrast to the first unit of the fleet used from 1959 exclusively for cruising, a vessel that is still afloat at the grand old age of 98.

This historic vessel, the 6549gt Franca C, carried 354 passengers in air-conditioned accommodation on cruises mainly in the waters of the Mediterranean and Black Sea. The ship served in the Costa fleet from 1953 to 1977.

The ship was built by the Newport News yard in 1914, as the steamer Medina for the Mallory Steamship Company, of New York. After serving it until 1948 the ship was reconstructed as the passenger and emigrant carrier Roma.

After buying the vessel, Costa had it converted to a considerably high-powered motor ship with a service speed of 15.5 knots. And when it sold it in 1977 the ship became well-known throughout the world as having the biggest floating library in the world.

The new German owner, Gute Bucher fur Alle, renamed the vessel Doulos on the Maltese register. From April 5 to 27, 1989, it made its only visit to Dunedin. Retired from service in Singapore in late 2009, the ship was handed over to a new owner in Singapore on March 18, 2010, for preservation and in now named Doulos Phos.