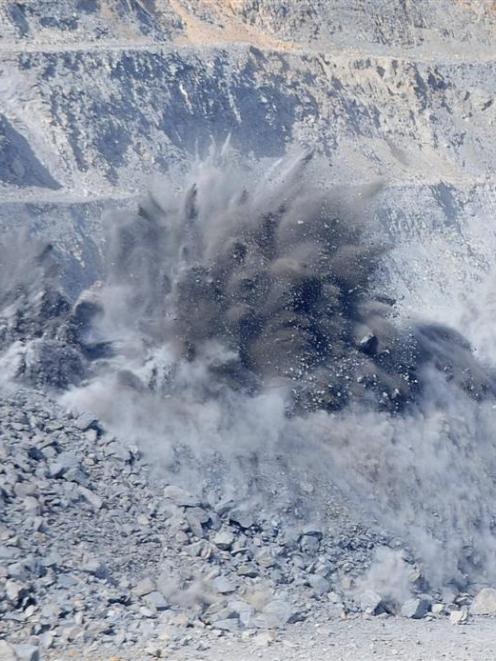 Spoil explodes skyward from Oceana Gold's main Frasers pit at its East Otago mine. Photo by Craig Baxter.
A record average gold price cushioned rising production costs for Oceana Gold as it booked a $US10.9 million ($NZ13.2 million) after-tax profit for its third quarter to September.

At 59,090 ounces, gold production was down slightly because of adverse weather.

Oceana has revised its annual gold production target with expectations now it will be "at the lower end" of the previously forecast 255,000-270,000 ounces this calendar year.

Although it booked a record average gold price of $US1706 per ounce, up 24% on the same period last year, Oceana's production costs increased from $US921 the previous quarter to $US956.

Despite this, Oceana maintained yesterday its cash cost per ounce for the year would be $US850-$US890.

The solid spot gold prices meant Oceana's profit margin per ounce rose 20% from $US625 the previous quarter to $US750.

Craigs Investment Partners broker Peter McIntyre said Oceana had benefited from increased revenue for the quarter, up from $US83 million a year ago to $US103 million; and a strong cash flow, high gold prices and implementing production cost control.

However, rising production costs and currency fluctuations were still of concern.

"The stronger US dollar has had a more direct impact on Oceana's result, compared to the currency gains made a year ago," he said.

Forsyth Barr broker Suzanne Kinnaird said the third quarter result was slightly ahead of expectations with earnings before interest, tax, depreciation and amortisation up 31% at $US41.9 million on the previous quarter.

"Our forecasts are under review, with a modest upgrade expected due to a lower New Zealand dollar in the near term," Ms Kinnaird said.

Oceana booked a $US10.9 million after-tax profit, but it also booked a currency loss of $US22.5 million compared with a currency gain of $US49.9 million a year ago. Its "loss attributable to shareholders" for the September quarter was $US11.63 million.

Oceana was contacted to comment on the currency loss and responded that the currency translation was a book entry for accounting purposes. It changed frequently because of the substantial cash on the balance sheet, which for the quarter stood at $US163.4 million.

Oceana chief executive Mick Wilkes said in a statement yesterday the result was buoyed by the rising gold price.

Oceana is 100% unhedged and sells all gold on the global spot market, with sales of 60,646 ounces during the third quarter, more than 7000 ounces less than the same quarter a year ago.

Oceana has said production will be down this year as it works through lower grade ore.

Mr Wilkes said construction work at Oceana's gold-copper development mine, at Didipio on the northern Philippines, remained on schedule. About 90% of the major processing equipment had been bought and the mine was still expected to be commissioned in the last quarter of 2012.