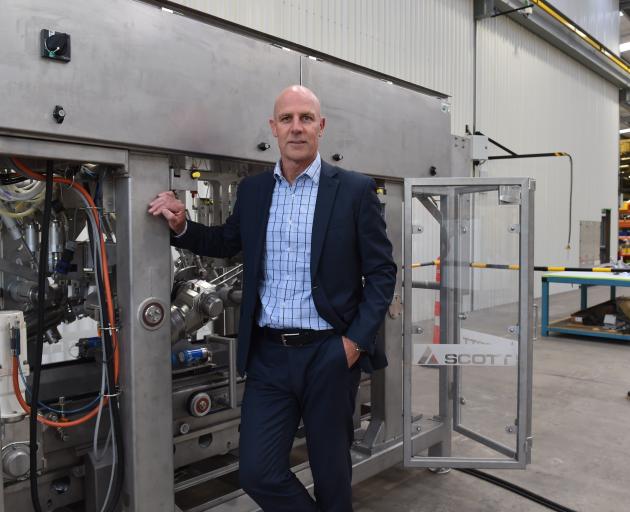 The NZX-listed company, which is behind some of the world’s leading automation and robotics technology, yesterday released its financial results for the 12 months to August 31.

With ebitda of $22.1million, the group reached its highest profit, superseding its pre-Covid FY19 performance of $20million. That was despite lower revenue when compared with the corresponding period, reflecting margin growth as a result of the ongoing execution of the Scott 2025 strategy, the company said in an announcement to the market.

It also announced the multi-million contract to deliver an automation solution for a United States-based leading global appliance manufacturer.

The design and build would be done at Scott’s appliance Centre of Excellence in Christchurch and installed in the customer’s North American manufacturing plant. Work would begin immediately delivery being expected late next year.

Yesterday, Scott Technology chief executive John Kippenberger said he was pleased with what had been achieved during the year, notwithstanding Covid-19. One year into its Scott 2025 strategy, he believed it was showing good traction.

Since his appointment nearly two years ago, Mr Kippenberger had led a reset of the company, redefining what it did, how it operated, and the sectors it was targeting.

Part of the new strategy was the creation of centres of excellence; Dunedin was the centre of excellence for meat, Christchurch for appliances and Auckland for mining equipment. That had been very successful and was illustrated by the growth in revenue and improvement in margin, he said.

‘‘We’re selling what’s proven and we deliver well and what the market wants,’’ he said.

While Covid-19 provided various challenges for the business, what was very positive had been the commitment of Scott’s team and ‘‘thinking outside of the box’’ during the pandemic which had meant it had been able to drive good customer outcomes while also delivering efficiencies. Mr Kippenberger gave a ‘‘huge thank you’’ to staff for their support.

What Auckland-based Mr Kippenberger loved about business was people — ‘‘seeing our people and talking to them about what we’re trying to do and listening to them and trying to understand the context of their environment’’ — and that was the part he sorely missed.

The company had also been looking at ways to have fun and build engagement across the group as a lot of people had been under pressure during Covid-19.

While there were still global supply chain issues, Scott had done a lot of work preparing and planning for those, Mr Kippenberger said.

The new appliance contract was for one of the world’s biggest brands which Scott had worked for in the past. It had been a highly competitive process and being awarded the contract was testament to the quality of the company’s design and its teamwork, he said.

While all three of Scott’s categories had achieved significant revenue growth, it was the products which grew the most (30%), taking its share of total revenue to 23%.

Rocklabs, Scott’s mining products and parts business, together with the BladeStop product revenues into the meat industry, both showed strong growth on the previous year.

It had been doing very well with its meat systems into New Zealand and Australia, working on some very large systems, and, more recently, with its new poultry trussing system in the US, Mr Kippenberger said.

Strong demand for its meat systems were largely driven by huge pressures on labour supply in New Zealand, Australia and the US which were causing demand for automation.

Supply chains of food companies and e-commerce businesses globally were under huge pressure due to labour and congestion in shipping and on the supply side, so were looking for proven technology solutions to help free up capacity.

While there were still plenty of challenges ahead, Mr Kippenberger was very pleased with the team across the business, including its executive and also the ‘‘huge support’’ from its board, chaired by Stuart McLauchlan. For a global company like Scott, he was excited about the opportunities ahead, he said.